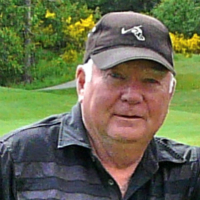 According to the US National Hole-in-one registry, the odds of the average golfer hitting a hole-in-one are 12,000 to one. If you’re a low-handicapper, your odds slightly increase to 5,000 to one. They state that the odds of a golfer making two holes-in-one in the same round are 67 million to one.

The odds change moderately depending on where you look, but needless to say, they weren’t in Dennis Swonnell’s favour last Thursday when he stepped onto the course at Bear Mountain Golf and Country Club.

But he beat them anyway.

“I was playing the Valley Course at Bear Mountain with a couple of my fellow members, Gordon Barnes and Keith Walsh on an 8:05 AM tee time. We were playing the number 10 hole at 163 yards with the pin just short of the middle on the right side. My six iron was straight into the sun so that all I knew was that it was right on the flag but none of us really saw it land due to the lighting,” explained Swonnell.

“I was just happy with a good looking shot and was hoping to have a putt for a birdie but we couldn't see my ball.”

Until they checked the hole, that is. It wasn’t Swonnell’s first ace, he sunk a hole-in-one a few years ago on the 16th at the Valley Course, but it was the first ace of the day.

Walking up to the 14th, a 135-yard par three, Swonnell joked with his fellow golfers about getting another.

“I hit another sweet shot right on the flag and saw it take two small hops and disappear. I knew this one was either in the hole or it had disappeared just over the plateau and out of sight,” said Swonnell.

Unbelievable as it was, Swonnell became a one in 67 million, hitting two aces in one round.

Swonnell is currently recovering from tendonitis in his knee and is a 19 handicap, slightly higher than what he’s been in the past. He has been playing golf for around 25 years and now tries to get out for a round four to five times a week.

But Thursday may just have been the game of his career.

An event like this is likely to happen just once every two years in British Columbia, but has now occurred twice in just over a month ago. Another British Columbia golfer, Ed Pike, accomplished the same feat in April at Country Meadows in Richmond on the fifth and 15th holes.

Something in the water in BC?

“I Just had toast or cereal. Nothing special,” said Swonnell.

So maybe that wasn’t it. Maybe it was just a really great day for a recreational golfer.