Royal Colwood wins 2014 PGA of BC Tournament of Champions 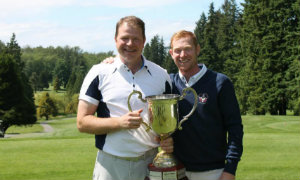 The Royal Colwood Golf Club team of Head Professional Jason Giesbrecht and Club Champion Kevin Carrigan shot a -9 total of 63 to win the TaylorMade & adidas Golf Tournament of Champions presented by Richport Ford on Monday at the University Golf Club.

Giesbrecht and Carrigan fired a blistering -6 front 9 score of 30, which included 4 birdies and an eagle at the fifth.

The duo would make their only bogey on the 10th hole, but another two birdies and an eagle at the 13th meant a back 9 score of 33 and final score of 63, two better than the Richmond Country Club duo of Head Professional Mark Strong and amateur Dave Gazley and the Victoria Golf Club team of Head Professional Lindsay Bernakevitch and amateur Craig Doell, who each shot scores of 65.

"We had a lot of fun out there," said Giesbrecht. "We went on a nice little run on the front."

"I think the key was we always had two putts for birdie or better," said Carrigan. "When you have 35 chances for birdie, that often leads to good things."

Giesbrecht said the win continues a great run for Carrigan, which has included three team titles in the last two years.

"It means a lot for the membership of Royal Colwood," said Giesbrecht. "Kevin is a very good player, but by no means is he guaranteed a spot as our champion. We pride ourselves on a high level of competition at our club and it truly is an honour to be able to play with our Club Champion at a great event like this."

"Jason's great to play with," said Carrigan. "We played well together and to be able to bring the trophy back to Colwood means a lot to us."