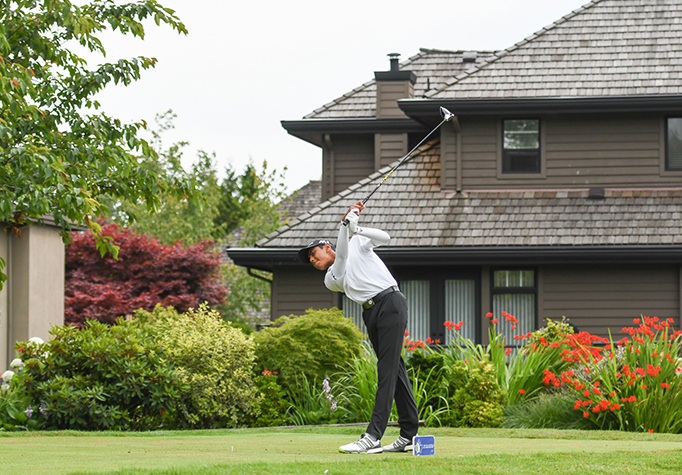 Victoria's Jeevan Sihota Is Back At The Top Of The Leaderboard In A B.C. Golf Championship, But This Time He's Got Company In Burnaby's Leo Harper - Image Credit Jurgen Kaminski (JKam Photos)/BC Golf

The 13-year-old from Victoria shot a four-under 68 Monday to grab a share of the first-round lead with Burnaby’s Leo Harper, but was lamenting the number of times he was playing out of the trees bordering Christina Lake’s fairways.

“I was in the trees a lot today,” Sihota said after the round. “It was kind of dumb to pull out driver on a few holes. I didn’t really have to. I only played the par 5s one-under today and they should be the scoring holes.”

Sihota, who won last week’s B.C. Juvenile Boys Championship at Granite Pointe Golf Club in Nelson, said he plans to dial down the aggression in Tuesday’s final round of the 36-hole event. “I am going to try to,” he said. “It's a really bad habit I have, I try to play a little too aggressive at times when I really don’t need to. I really don’t need to hit driver off a lot of tees here. I think the first thing here is to try and put the ball in the fairway off the tee.”

Sihota’s only bogey of the day came after some tree trouble on the par 5 15th hole. “I hit it left into the trees, punched out and I hit a 9-iron right of the green. I hit my chip shot to two and half feet and I missed the putt. That was a real bad bogey. But I putted pretty good today.”

Harper, who plays out of Pitt Meadows Golf Course, birdied his final two holes Monday to grab a share of the lead. He and Sihota are one shot ahead of Brycen Ko of Richmond and Rongzhi Fan Ji of Victoria.

Harper celebrated his 15th birthday Monday with what he said was the best competitive round of his young career. “My putting was solid and I hit the ball off the tee well,” said Harper, who is entering Grade 10 at Burnaby Mountain Secondary. “I set myself up for some easier approach shots. A couple of my birdie putts were from inside 15 feet but I made about a 25-footer on 18.”

Harper tied for third last week at the Juvenile Boys Championship at Granite Pointe. “I have been playing good, but I just didn’t have it going the final round last week,” he said. “But that stuff happens, right.”

Sihota won last week’s Juvenile tourney by 11 shots, but that clearly isn’t going to happen this week. “I would prefer to have a five- or six-shot lead because it gives you more room for error,” said Sihota, who plays out of Gorge Vale Golf Club. “But that’s okay. I am not going to be leading by five or six shots every day.” The bantam tourney is open to players 14 and under as of Aug. 1.

On the girls’ side, Sherri Yang of Richmond shot a two-over 74 and has a one-shot leading heading into Tuesday’s final round. Yang, a 14-year-old who plays out of Quilchena Golf & Country Club, had three birdies in her round. Yang said her round could have been better as she bogeyed her final two holes.

“I had a great run today,” said Yang, who is about to start Grade 9 at McMath Secondary in Richmond. “My short game was on today. I had a good group who were a lot of fun to play with. Overall, it was a really good day.” One of Yang’s birdies came via a chip-in on the par 3 fifth hole.

Chaewon Baek of Langley and Angela Arora of Surrey share second place after opening with three-over 75s. Yang, who finished tied for seventh at last week’s Juvenile Girls Championship, said she’ll try not to put too much pressure on herself in Tuesday’s final round. “I want to be in a good mood tomorrow,” she said. “I don’t want to be over-stressed. I want to relax and enjoy the day.”

She said hitting fairways and staying out of Christina Lake’s black sand bunkers will keys for her. “You have to hit good drives here, especially on the back nine where there are a lot of trees. It’s not really narrow, but with a bad bounce you can be in the trees and that’s an extra shot.

"So hitting fairways is key and staying out of the bunkers. The bunkers are pretty hard, they are different than what I am used to. The sand is black and the texture is different.”