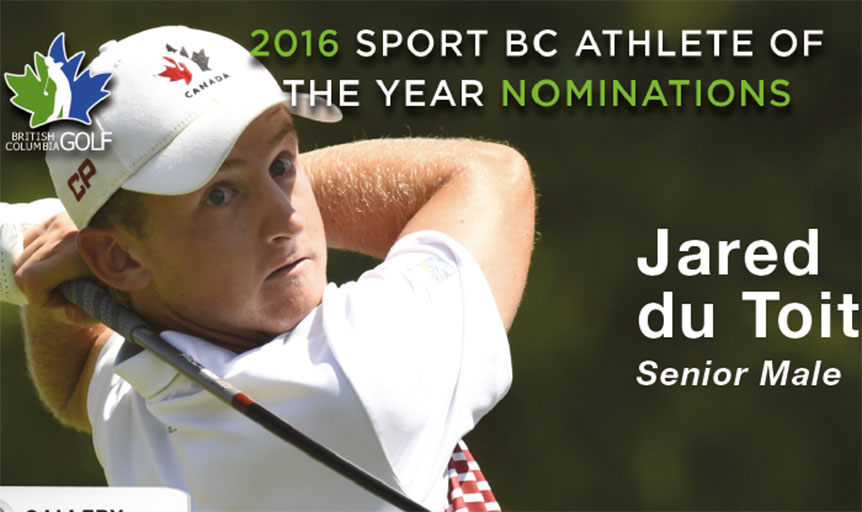 Jared du Toit of Kimberley has been nominated for the Sport BC Senior Male Athlete of The Year Award.

Du Toit, who had an outstanding 2016 season, has been the number one ranked amateur male golfer in Canada for over 44 weeks straight as well as being ranked as high as number 23 in the world, will find out on March 8th, 2017 during the awards ceremony dinner being held at the Fairmont Waterfront Hotel in Vancouver, whether he will be adding another honour to his name.

Included in his list of accomplishments this past summer was winning the prestigious Glencoe Invitational along with being named the 2016 PNGA Men's Player of the Year, winning the British Columbia Golf Order of Merit, the Golf Canada Men's Amateur Order of Merit and the Gary Cowan Medal as the Low Amateur at the RBC Canadian Open where he thrilled the country with his T9th after contending right from the opening round.

Immediately following that performance at Glen Abbey, du Toit found himself competing with the top amateurs in the world in the Porter Cup at Niagara Falls Country Club in Western New York, where he finished T4th.

Du Toit, who is a member of the Kimbeley GC and attends Arizona State University, finished his college golf season last spring as a very important member of the Devil's golf team with a T5 at the Albuquerque NCAA Regional Championship to go along with 3 other top 10 finishes in NCAA competition.

A member of the Canadian National Team, du Toit added another top 20 result with his T15 finish at the Canadian Men's Amateur in August.