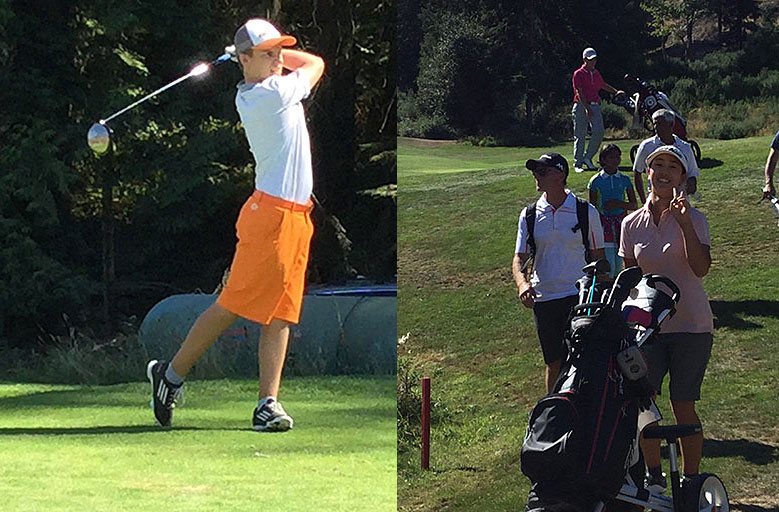 Ilirian Zalli (L) Set A Non-Professional Course Record Shooting 63 In The First Round Of The BC Bantam Boy's Championship At Bowen Island GC. Chaewon Baek (R) Leads The Girls By Three

Vancouver's Ilirian Zalli not only survived a long, hot day in the opening round of the British Columbia Golf Bantam Boy's Championship at Bowen Island Golf Club, he shot the de facto non-professional competitive course record carding 6 biridies and an eagle to go along with only 1 bogey for a 7-under par score of 63.

According to the pro shop at Bowen Island GC, North Vancouver Professional Bryn Parry recorded a similar score in a Pro-Am not long ago, but nobody in Zalli's age group has ever come close to that number on the 9-hole 6,006-yard par 70  layout.

Zalli, who plays out of Richmond CC leads by 6 over his nearest competitor, Leo Harper from Pitt Meadows GC, who overcame two bogies and a triple on the par 4 12th with 6 birdies to still come in at 1-under 69.

"I just wanted to stay aggressive, I played the juvenile championship and I got a little bit tired after a few long, hot rounds at Chilliwack. But today I managed to stay refreshed and I just wanted to put myself up there, shoot a low round because it's only 36 holes, it's very short, it happens very quickly.

"I just wanted to take all the chances I could and make as many birdies as I could," said Zalli of his record-setting round. Zalli's previous best in a competitive round was, as he put it, 'only 68'.

Sitting in third spot is Victoria's Jeevan Sihota who put together a true roller coaster, even par round of 70 that included 7 birdies, 5 bogies and a double bogey. Sihota, who recently won the U.S. Kids 12 & under championship at famed Pinehurst #8 in North Carolina, fired 5 birdies on his back nine to help recover from a 3-over par opening nine.

Surrey's Kyle Chang at 1-over 71 sits in 4th place while Brycen Ko of Richmond rounds out the top 5 for the boys at 2-over 72.

On the girls side, it was Langley's Chaewon Baek with a 2-over 72 taking a 3-shot lead over Surrey's Claire Lovan into round two on Wednesday. Baek, a member at Swan-e-set Bay in Pitt Meadows, had two bogies on the front nine, clawed back to even par with birdies on 14 and 16 only to suffer an unfortunate double-bogey on her final hole when her approach shot found the green-front hazard.

Lovan is one shot ahead of Victoria's Akari Hayashi who termed it, "A real struggle out there," as she saw 5 birdies offset by two triple-bogies and 5 bogies.

After a triple on the par 4 10th she reeled of 4 straight birdies before adding two back-to-back bogies and finishing at 6-over 76 for the day. Vancouver's Angela Zhang at 11-over 82 and Maple Ridge's Amy Ehlert at 12-over 82 are the others in the top five for the girls.

There is also a boy's Novice Division as part of the event and using the Stableford point scoring system it was Rossland's Xander Bankes putting up 45 points to take the 1st round lead by 5 points over Jordan Harvey of Nanoose Bay.

Jagre Knight of Parksville and Nic Wrixon of North Vancouver were T3 at 39 points while Vancouver's Gabriel Ma sits alone in 5th with 33 points going to the final round.

Wednesday's final round tees off with a shotgun start at 9:15am.