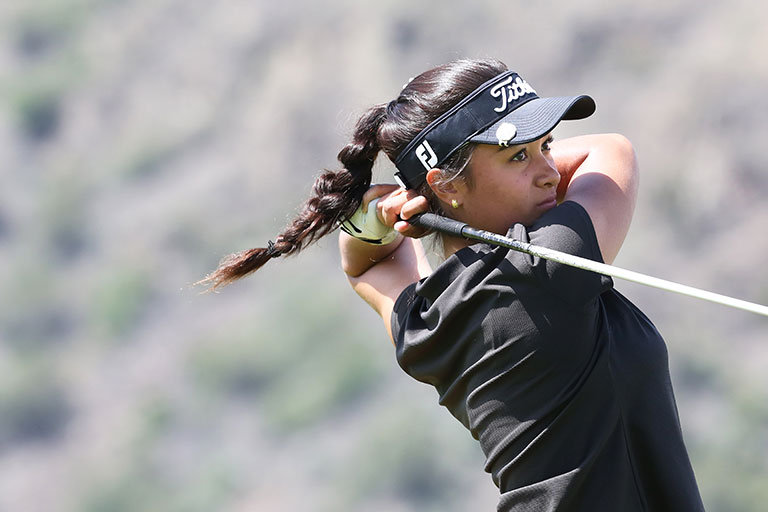 The British Open may be taking place across the pond at Royal Troon this week but it was during the third round of the 2016 BC Junior Girls Championship that typical ‘Open’ weather decided to show up at Big Sky Golf Club in Pemberton.

With the leaders just heading into the home stretch of holes on the back nine the wind came howling through the mountains and the rain was coming in sideways.

As it turns out those were ideal conditions for eventual third round leader Mary Parsons, whose 2-under back nine score rescued her from an unsettling 4-over outward nine and staked her to a two-shot lead heading into Friday’s final round.

Parsons, who spent a good portion of her early years in Guam where she picked up and initially learned the game, credited the weather from that region, in particular the northeast trade winds, for helping her learn to how to navigate through this sort of weather.

“Normally when the wind starts to blow players start to struggle, plus I lived in a tropical place where the wind would blow and rain would downpour when it happened and conditions would just be horrible. But I figured out you just have to play for it, just aim 20-yards right or whatever and let the wind play the ball. You can’t just try to block it into the wind.”

That was clearly evident on the 157-yard, par 3 17th hole - playing more like 257 yards into the wind - where Parsons manoeuvred her way through the gale to about 18 feet above and left of the cup and calmly rolled in the birdie putt. It was her second birdie of the back nine which she paired with 7 pars to shoot a 2-over 74 on a day where only two players were able to break par.

Those two players being Tiffany Kong and Hannah Lee who are in Parson’s immediate rear-view mirror as they sit two shots and five shots back in 2nd and 3rd spots respectively.

The leader through the first two rounds, Sumie Francois, struggled to an 82 due mainly to the blustery conditions on the back nine which saw her card an 8-over 44. She still sits alone in 4th, but has slipped to 7 shots back of the lead.

The low round of the day was recorded by Vancouver's Kong whose 2-under 70 was constructed of two birdies and no bogies and came about in part due to something she discovered while struggling with her swing at last week's BC Women's Amateur.

"For these past few days I've been taking 3/4 swings, which is helping keep a straighter and lower trajectory ball flight, and that helps in the wind. Because I was struggling at BC Am with my swing ...I decided to just hit with a 3/4 swing for the entire tournament (at BC Junior Girls) and it's working out great," said Kong.

Her score could have been even better as her eagle chip on the 13th missed by a fraction of an inch but led to a tap-in birdie. Her other birdie came on the finishing par 5 18th hole where she knocked in a 9 footer.

But probably just as important for Kong was finally making a par on 16 after recording double-bogey sixes on the hole in each of the first two rounds. "I've been struggling with hole 16 where I made double the past two days but making a par there today definitley boosted my confidence and I'm confident I'll do well there tomorrow too," she said.

The other sub-par round on the day belonged to Surrey's Hannah Lee, who, along with Kong and Richmond's Kathrine Chan is a member of the Team Canada Development Squad. Lee, who shot 1-under 71 with 3 birdies and 2 bogies, hit 15 of 18 greens on the day, which was a pleasant surprise to her after only managing 7 and 5 the two previous days.

Stlll, she feels things are starting to come together, "At BC Am I was hitting a lot of greens, so that was good, it was definitely a strong part of my game and that helped me a lot. My putting has been good for the last couple of weeks so that's been helpful too."

As far as the effect of the wind for those incoming holes, the 2016 CJGA Western Jr. Girls Champion concurred with leader Mary Parsons in that she felt it actually helped her game saying, "I found it actually made me focus a bit more, trying to narrow down what I wanted to do for a game plan. But it was fine, it just made me focus a little bit more, which was better."

As for her game plan in the final round coming up on Friday, Parsons had this to say, “Tomorrow, depending on the weather, I’ll be more aggressive toward the holes. But it also depends where my nearest competitor is…whether I’d have to play more conservative, but obviously you have to take the risk/reward approach to the game.”

The turnaround story of the day belonged to Vancouver's Bethany Ma whose round of 73 included 6 birdies just a day after shooting 95. Her 22 shot improvement enabled her to make the 54-hole cut by virtue of being in the top 5 Best Ball teams along with partner Jaya Rampuri who is T7 with Akari Hayashi at 12-over.

The field was cut to the low 24 and ties after 54 holes including the Top 5 Best Ball teams regardless if a player on a team had missed the individual player cut.

The final round tees off at 7:30am on Friday.

In the concurrently running Best-Ball competition, Amanda Minni and Mary Parsons jumped out to a 4-shot lead over Kathrine Chan and Tiffany Kong whom they shared top spot with after the 2nd round. Minni and Parsons sit at 14-under for the tournament while the teams of Cecile Kwon & Esther Lee along with Sumie Francois & Claire Lovan are T3 at 7-under going into Friday's final round.