Sumie Francois Maintains Lead After Round 2 Of BC Jr. Girls Championship

Round two of the 2016 BC Junior Girls Championship at Big Sky Golf Club was played under mostly sunny skies with the stunning backdrop of Mt. Currie doing its level best to provide a distraction to the competitors below.

First round leader Sumie Francois of Shaughnessy G&CC continued her plan of playing conservatively off the tee and but for a balky putter may have been able to extend her 2-shot lead. As it was, her closest pursuer, Delta's Mary Parsons who plays out of Richmond's Mayfair Lakes GC, managed the only under par score of day two with a 1-under 71 to cut into Francois' lead by one shot going into round 3 on Thursday.

Francois could be seen for a few hours after her round on the practice putting green working on the part of her game that had let her down on this day. "Today I missed a lot of birdie chances," she recounted, "especially on the front nine, I wasn't able to convert enough birdies which kind of cost me."

Ironically she birdied the first hole which could have got her off to a great start, however she gave that back with a bogey on the par 5 4th hole and then reeled off six straight pars until finally making another birdie on the 11th hole to get back to red numbers. Unfortunately she immediatley suffered another bogey on 12 to fall back to even on the day. Then on the ensuing par 5 13th she made birdie for the second day in a row.

Of course tee to green has been Francois' strength so far and although she would par four of the final finishing holes she made one more bogey after putting her tee shot in the water on 16, a hole she later stressed the importance of, saying, "The tee shot on 16 is very, very important. You've got to put the ball in play." 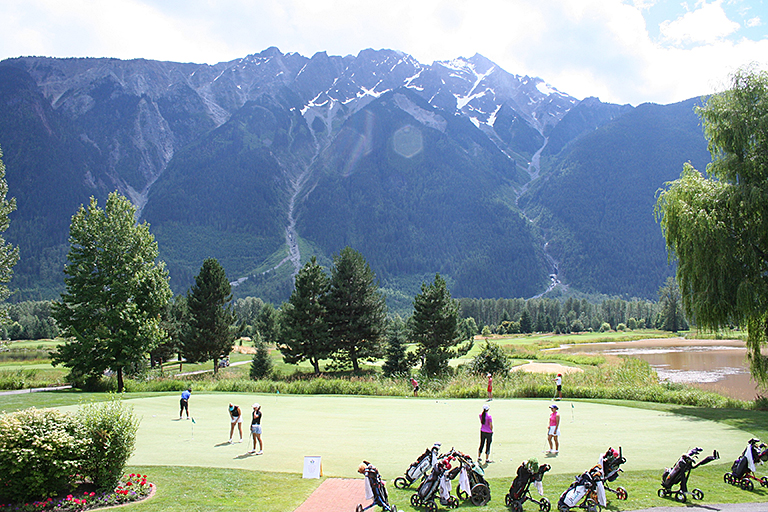 The Majestic Mount Currie Provides A Spectacular Backdrop At Big Sky Golf Club For The 2016 BC Jr. Girls Championship

Meanwhile, Parsons started out rather slowly making a bogey on the 2nd hole and finally getting that one back with a birdie on the par 5 9th hole. Her back nine included 3 birdies and 2 bogies to allow her to shave one shot off the deficit to Francois. The two will play together in the day's final group on Thursday along with Richmond's Kathrine Chan who sits alone in third place after a 3-over round of 75.

Vancouver's Tiffany Kong sits at 5-over for the tournament after also carding a 2nd round 75 and is in solo 4th place. Rounding out the top five is Maple Ridge's Esther Lee at 6-over following her 2nd round 2-over (74).

Heading into the final two rounds Francois allows that holding on for the win here would be very meaningful to her after having her share of problems with her game of late, "If I do win it's going to mean a lot to me," she said, "because I've been struggling with my game for a couple of years."

The 3rd round of the BC Junior Girls Championship tees off at 7:30am Thursday with the final group going out at 9:40am.

Following play in Thursday's 3rd round the field will be cut to the low 24 and ties along with the top 5 Best Ball teams.

In the Best-Ball competition there's two-way tie at the top between the team of Tiffany Kong and Kathrine Chan and Amanda Minni who is paired with Mary Parsons. Both teams are at 8-under for two rounds and hold a two shot advantage over Sumie Francois and Claire Lovan

The team of Amanda Minni and Mary Parsons from Zone 4 stretched out their first round 10 shot lead and won the Zone Competition by 20 over 2nd place Esther Lee and Shania Remandaban from Zone 3.