Motomochi Back At B.C. Amateur In A Different Role 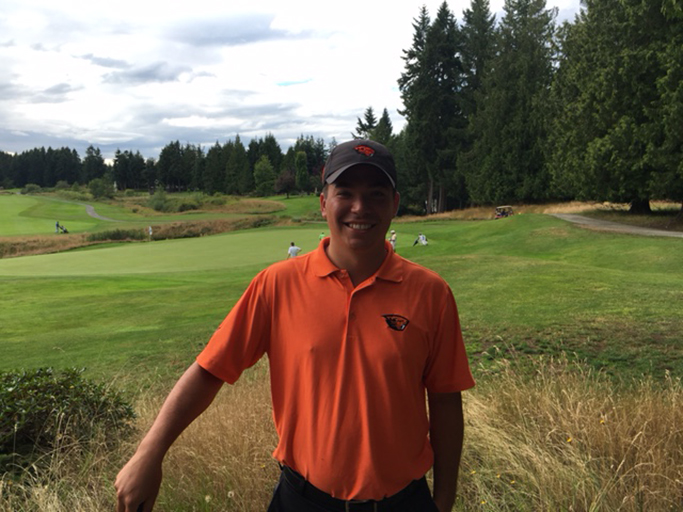 QUALICUM BEACH -- It wasn’t all that long ago that Jonnie Motomochi had the B.C. Amateur Championship circled on his summer playing calendar. These days it’s still highlighted, but for a different reason.

Motomochi now scouts the tournament he used to play in.

A solid junior career landed Motomochi a golf scholarship to Oregon State University, where he played for the Beavers. Now he helps coach them.

After graduating from Oregon State in late 2012, Motomochi accepted an offer to become an assistant coach with the school’s men’s team. That means he spends a good part of his summer travelling to golf tournaments and scouring the fairways for fresh talent.

That is exactly what he is doing this week at Pheasant Glen Golf Resort, where the 114th playing of the B.C. Amateur is being held. “I am not home in July,” Motomochi says with a smile.

“Recruiting in July is pretty crazy. I am here, the head coach is down in San Diego at the Junior Worlds. Next week, I am in Tennessee and he’s somewhere else and the week after that I am in southern Oregon and he is going to Mexico. I am racking up a lot of miles. It is pretty crazy.”

Crazy in a good way. The 25-year-old Motomochi is enjoying his new life and said the transition from player to coach was not a difficult one to make. “It ended up being pretty easy,” he says.

“My first year I had three former teammates that were still on the team and people asked me if that was tough. It was a lot better than you’d think just because the guys knew where I was coming from and I had always talked golf with them, too. It was a pretty easy transition.”

Motomochi made headlines as a 12-year-old when he qualified to play in the 2003 Canadian Amateur Championship at Shaughnessy Golf & Country Club. He went on to play in a number of B.C. Junior and B.C. Amateur championships.

“I think I played in four B.C. Ams,” he says. “One of them was in Golden. It was a sweet course in the middle of nowhere. That course is a hidden gem. The B.C. Am I remember best was the one at Marine Drive (in 2008). I had played there as a junior and the course was in such good shape. That was pretty cool, staying at home and playing.

“Playing in the B.C. Am was always a big deal for me. And at that time guys like Nick (Taylor) and Darren (Wallace) were coming back to play. The BCGA always puts on a good event and I still see some familiar faces out here. I saw (rules official) Lynn Benedictson out there. Lynn took us to China for a junior event so I spent a lot of time with her when I was younger. It is cool being out here again.”

Motomochi would not discuss what players he is watching this week, but he was spotted following new B.C. Junior champion Tristan Mandur of Mill Bay. He did say he looks at much more than scores when assessing potential recruits.

“Obviously academics is a pretty big deal,” he says. “How they carry themselves is also important, the confidence they have. Getting mad is okay, but how mad are you getting? How they handle adversity is huge because when you get to school you have so much to handle outside of golf.

When times get tough how are you going to be able to handle that? That’s a big deal. And how much confidence do you carry after a bogey or after a bad shot. Stuff like that.”