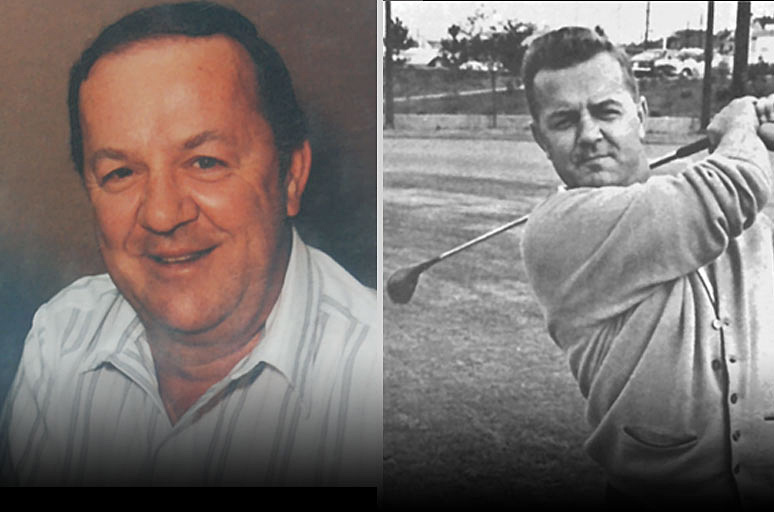 Arv Olson (Left) From The Book Jacket Cover Of His Definitive History Of BC Golf, "Backspin," and (Right) From His Early Days At The Vancouver Sun As The Golf Beat Writer

We lost Arv Olson Wednesday. I use the collective “we” because golf has lost him, hockey and rugby have lost him and all his friends and family have, too.

And we will really miss him.

When I think of my dear friend Arv Olson, the first thing that comes to mind is fun. We had so much fun in each other’s company. At least I did and he laughed a lot so I’m assuming he was having a good time, too.

I always looked forward to the B.C. Amateur golf tournament because it meant I would be spending all day with Arv for five days in a row. For some reason, he always let me make our hotel reservations even though I more often than not picked a dump.

One place we stayed in Kelowna—I think that was at a Canadian Amateur—we were out at a pay telephone trying to send our stories back to our newspapers with only the overhead streetlights to help us see. I don’t recall why we couldn’t use the phones in our rooms but it had something to do with the hotel’s system.

I know I picked a bad hotel in Nanaimo, too. And another in Cowichan. But I don’t think Arv ever complained. In fact, I don’t remember Arv ever complaining about anything. He left that vital human behavior to me. 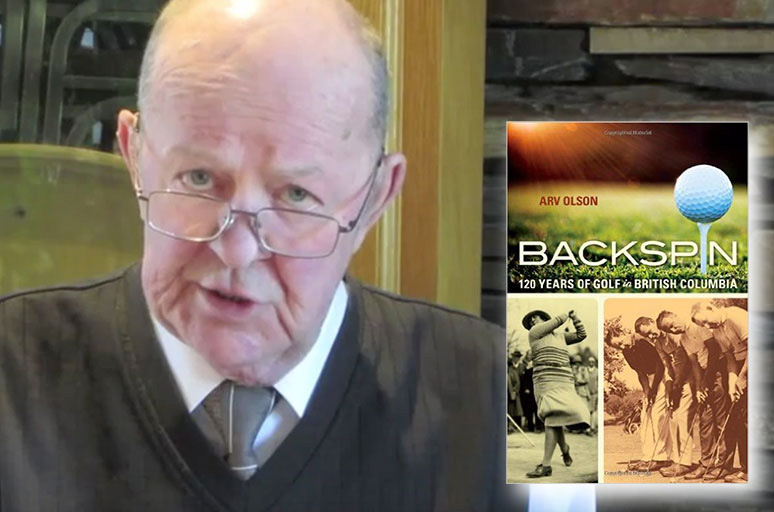 Arv turned 80 on July 2. He is survived by his wife Alice and children Glen and Kathy. They lost their youngest daughter Karen while she was travelling in Europe in 1988. There are five grandchildren and three great grandchildren with another due in November.

Arv worked in the Vancouver Sun sports department for nearly 40 years. Sun contemporary Archie McDonald and Tom Tait were his best friends. They all grew up on the North Shore together. Besides golf, Arv covered the Canucks for several seasons and he loved rugby, but golf was his favourite. For instance, he named his dog, a yellow Lab, OB (for out of bounds).

And he knew everyone in the sport. Better yet, they knew and respected him and his fine work. It was my good fortune to tag along with him. He introduced me to everyone in golf and his love of the game rubbed off on me. 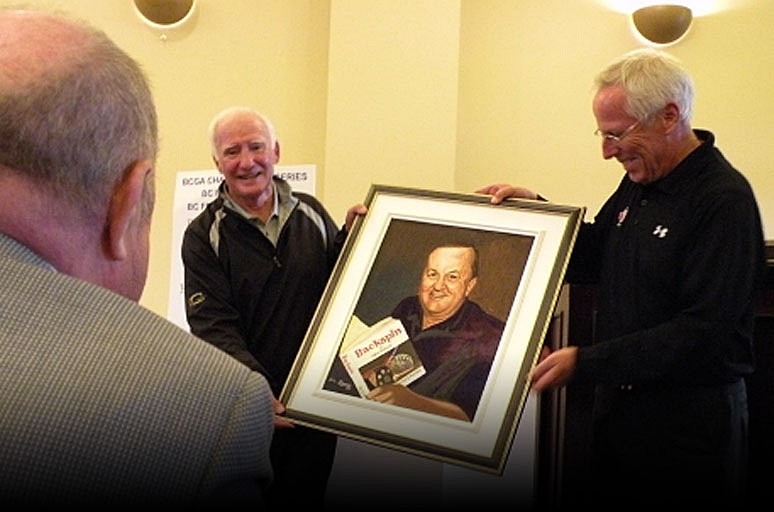 In A Special Presentation, An Original Oil Painting By Noted Canadian Golf Artist And Broadcast/Journalist Eric Dwyer, Was Unveiled And Awarded To Arv Olson By BCGA President George Faithful (Left) And Golf Hall Of Fame Of BC Member, Doug Roxburgh, (Right) The 13-Time BC Amateur Champion - image courtesy www.bcgolfnews.com

The Olson and McDonald families vacationed a lot together. One time Arv and Archie just about drowned when they took a canoe out on the lake by their cabin. Somehow they got all screwed up and Archie’s hat fell in the water and upon trying to retrieve it, the boat capsized and the pair of them were flailing away trying to get it righted.

At the time it was probably a harrowing experience but in the retelling it was hilarious.

Arv was the author of five books including two versions of Backspin (100 and 120 Years of Golf in British Columbia). It isn’t a stretch to describe it/them as a historical bible of the game in this province.

If he didn’t personally cover every one of Doug Roxburgh’s 13 B.C. amateur titles, he certainly made it to most of them. He went to several Masters in Augusta, Georgia. (The ones Dave Barr and Richard Zokol played). And got drawn to play on the Monday after one of them.

Those were good times. Not certain where fishing fit in the order of Arv’s sporting enjoyments, but water was never far away. The Olsons vacationed in Osoyoos for 15 years covering his birthday every year. They also liked Chimney Lake, near Williams Lake, where one spring Arv had to chip through the ice with a pick to get his line in the water. 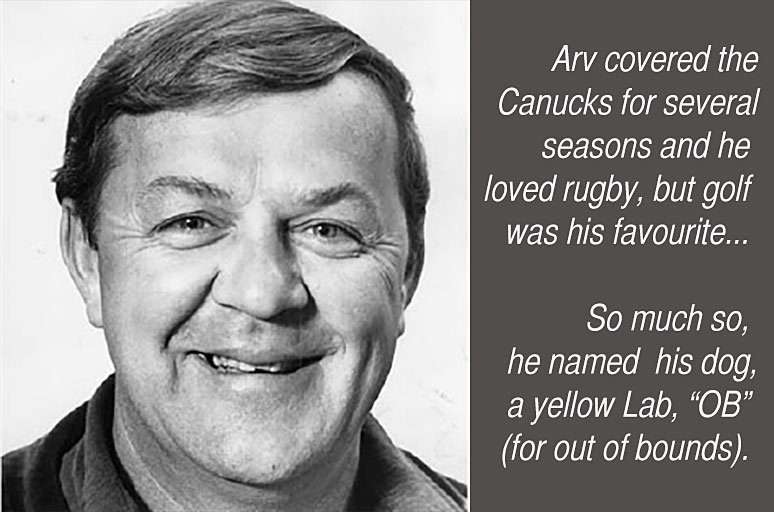 When he retired from the Sun, they moved to Fanny Bay on Vancouver Island. Kathy had preceded them and Glen followed.

Surrounded by nearby family, it was a nice retirement, but Arv’s last 10 years have not been kind. Heart problems and diabetes were a crummy combination. His serious troubles began on the Saturday of the 2005 Canadian Open.

He came over to watch the tournament Mark Calcavecchia would win and I met him at the Richmond hotel designated for media parking. He was going to stay overnight at my place and head for the ferry on Sunday evening.

By the time we got home, Arv wasn’t feeling very good. He’d called Alice from Shaughnessy and she instructed him to have something to eat. We were going to have a nap before going out for dinner. He was feeling worse and called Alice again.

She said to get to emergency at Vancouver General.

He would recover from the ensuing heart surgery…I remember sitting with Alice when he awoke one afternoon in hospital. He told us about a funny dream he’d just had.

Of course, it would be funny…that was Arv.

CELEBRATION OF LIFE ARRANGEMENTS ARE PENDING

Links To More On Arv Olson