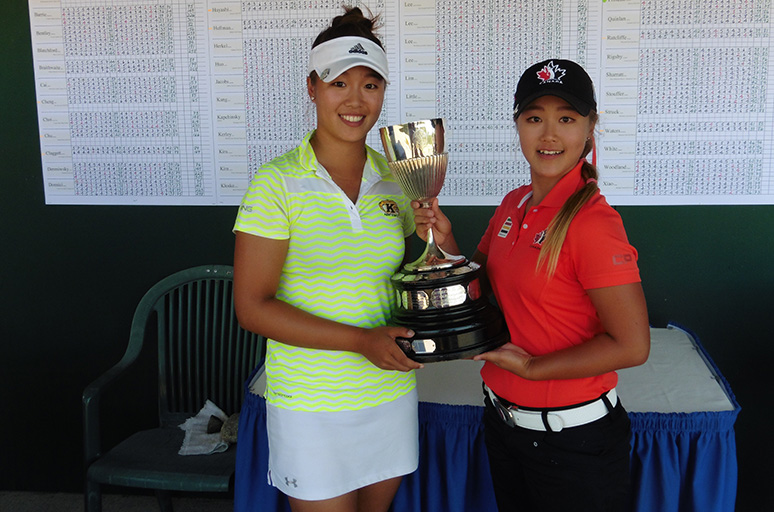 It was quite a week for B.C.’s Kim sisters in the Top-10. Taylor Kim picked up eight spots to climb up to a career-best No. 3 in the Canadian rankings while younger sister Michelle Kim jumped 33 spots and up to No. 5 in Canada following a third place finish at the Pat Lesser Harbottle Invite.

The freshman at Idaho shot a career-best final round 69 which included a 30-foot putt on her final hole of the tournament. The result was enough to also land Kim 'Big Sky Conference Player of the Week' honours for the third time in four tournaments this fall.

Michelle is also tied for 17th in par-3 scoring in the U.S. “She has transitioned to college well and is building off the experience she gained this past summer at national events,” said her coach Lisa Johnson. That experience included winning the B.C. Women’s Amateur title over her older sister Taylor.

Fellow British Columbian Naomi Ko, a member of Golf Canada’s Development Squad, moved up to No. 6 in the Canadian rankings after picking up seven places in the world rankings.

Outside the top 10, Anna Younjin Kim recorded a sixth place finish at the Rutgers Invitational, the second Top-10 finish this fall for the senior from Toronto who is playing her collegiate golf at St. John’s University. That was a good for an 11-place improvement in the world rankings.

Honourable mention this week goes to Annie Songeun Lee, who recorded her second straight win – this time at the Quinnipiac Classic. The sophomore from Surrey, B.C., has four Top-10 results this fall and was named the MAAC Golfer of the Month for September.

On the men’s side, Blair Hamilton retained his No. 1 Canadian ranking with a season-best fourth place finish at the Bayou City Collegiate Classic. It was his first Top-5 and second Top-10 result of the season, good for an eight-spot gain in the world rankings.

The Golf Canada National Team member battled back from a disastrous start in the final round – bogeys on each of his first four holes – by posting six straight birdies en route to a final round 70. The All-American senior from Burlington, Ont., helped the Houston Cougars erase a 17-stroke deficit to go on to win the team portion of the tournament.

Teammate Matthew Scobie jumped up 49 spots, going from No. 17 to No. 14 in Canada after finishing tied for 26th at the same event. After opening with rounds of 78 and 75, he bounced back with a final round 70, the third lowest score of the season for the junior from Ajax, Ont.

Jared du Toit kept pace with Hamilton, picking up six world ranking places after finishing tied for eighth at the Alister MacKenzie Invitational. The junior from Kimberley, B.C., continues to impress since joining the Sun Devils with his best result of the season.

Stuart Macdonald jumped 27 spots in the world rankings to solidify his hold on the No. 10 ranking in Canada after placing 16th at the Crooked Stick Intercollegiate. It was his ninth career Top-20 finish and the senior from Vancouver has now posted back-to-back Top-20 results for only the second time in his career. Macdonald’s efforts helped Purdue finish in the top four of the team competition for the fourth time this year, equalling the mark set two years ago.

Patrick Murphy finished in a tie for 36th at the U.S. Collegiate Championship in just his third tournament with the Bruins. The freshman from Calgary, who is a member of Golf Canada’s National Development Squad, climbed 42 places in the world rankings.

Maxwell Sear makes his debut at No. 20 in the Canadian rankings after climbing 134 spots. Coming off an impressive runner-up finish at the Wolfpack Intercollegiate last week in which he led heading into the final round, the freshman from Unionville, Ont., was named the West Virginia University Student Athlete of the Week.

Missing the cut at the season ending Tour Championship was likely not the way Augusta James envisioned ending her first year as a professional. The result ended up dropping the former Golf Canada National Team member outside the Top-10 of the Tour’s money list as she came up $800 shy in her quest to earn an LPGA Tour card for next year. The Bath, Ont., golfer will get a chance to play her way onto the Tour later this year at Q-School

The only other player with a mathematical chance of earning a Tour card was Maude-Aimee Leblanc. The Québec golfer climbed 10 spots in the world rankings after a tie for fifth left her 14th on the money list. She does get an exemption into the final stage of Q-School in December.

Anne-Catherine Tanguay climbed 18 spots in the world rankings after finishing tied for 14th at the season-ending Symetra Tour event. She heads into the second stage of LPGA Tour Q-School with four Top-20 results in her last five tournaments.

Justin Shin climbed 67 spots in the world rankings after finishing in a tie for fourth at the Chongqing Open on PGA Tour China. The result also vaulted Shin up to No. 12 in the Canadian rankings. It was his third Top-10 result this year on the Chinese tour which includes a win back in May. Shin moved to within ￥34,000 of fellow Canadian Eugene Wong for fourth place on the Order of Merit. Wong was forced to withdraw from the event with an injury. With three events remaining, both are in line to secure Web.com Tour status for next year.