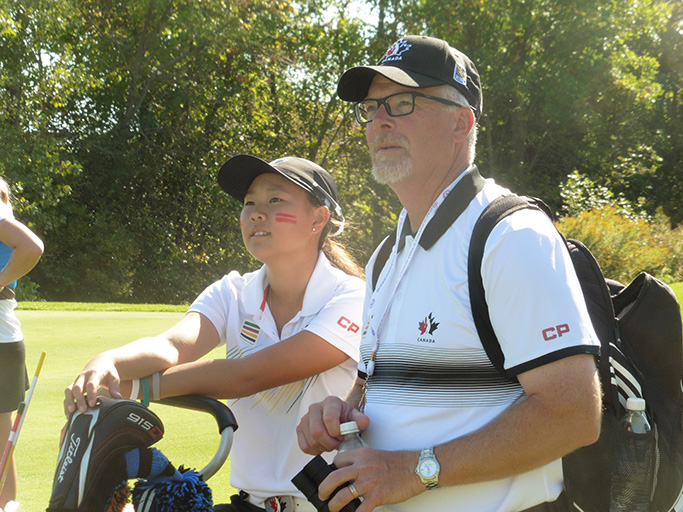 On a day when many international players broke par and tamed The Marshes during Round 2 of the World Junior Girls Championship, Team Canada 1 and 2 had a tough day on the links.

Richmond’s Alisha Lau is the top Canadian after her second-round (+2) 74 has her at (+6) 150 for the tournament. Her Team 2 teammate Kathrine Chan also improved on her opening round 79 with a (+3) 75 which included two birdies in her final three holes.

Chan sits at (+4) 154, the same score as teammate Euna Han, who shot a second round 79 to go with her opening round 75. “I improved by four shots on the second hole,” said Lau of her only birdie on Wednesday.

“I hit it to three feet and made the putt, so I’m happy with that. I missed a six-footer for birdie late and then made a couple of bogeys, but I had a lot of good looks at birdie, and I scored better today than the first day.”

Chan also improved and was happy she was able to contribute a counting score for her team. “Coach told us we should try and get better every day,” said Chan. “I’m happy I played better today and got more experience. It was so fun playing with girls from other countries.”

Han was disappointed in her round and said she’ll work on all aspects of her game Wednesday afternoon before all the golfers and their coaches go off to a barbecue and fun mini-putt competition.

Team Canada 2 coach Mike Martz was happy with how his girls kept fighting all day long. “They did a good job today hanging in there,” said Martz. “Yesterday, Alisha and Euna’s scores counted and today, it was Kathrine and Alisha. That’s what a team does, it plays together and so when Euna struggled today, the others are there to pick up the team.”

Lee had a tough day, save for her only birdie, a 40-foot putt on the 9th hole which put a smile on the Surrey native’s face. Team Canada 1 coach Ann Carroll tried to give her team a pep talk after the round. “They tried their best and they put their heart and soul into this and that’s all I can ask,” said Carroll. “We’ve been trying to make it as fun as possible for them so they can enjoy the experience.”

But the story at the top of the leaderboard is South Korea’s three golfers, who all shot under par during the second round and handily lead the team competition and occupy two of the top three spots on the individual leaderboard.

Jang is a little under the weather, which makes her second round score even more remarkable. Jang’s teammate, Hye-jin Choi, had a share of the opening round lead at (-2) 70 and recorded another under-par round, (-1) 71, to sit at (-3) 141, two strokes behind her teammate.

Another great round was put up by France’s Pauline Roussin-Bouchard, just 15 years old, who carded a (-5) round of 67 to rocket up the leaderboard to solo fourth place, just three strokes behind Jang. Roussin-Bouchard, who was in the opening twosome with Italy’s Carolina Caminoli, had opened with a (+3) 75 and the duo was done their round in just over four hours.

In the team completion, South Korea holds a commanding six-stroke lead, as their (-9) score of 279 is well ahead of Denmark’s (-3) score of 285. Sweden is another two strokes back at (-1) 287 and these three countries are the only ones under par at the midway point of this tournament.

For full results from the World Junior Girls at The Marshes, please click here