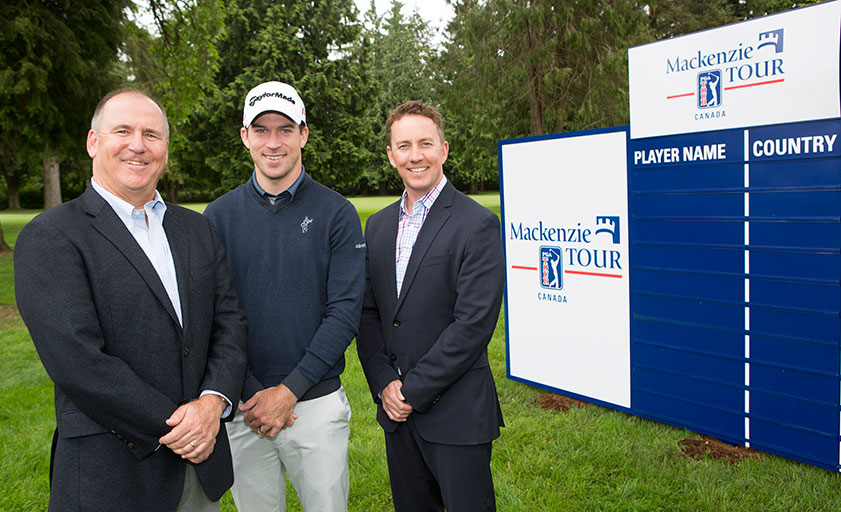 The Tour is being renamed the Mackenzie Tour–PGA TOUR Canada, effective immediately with this week’s season-opening event in Vancouver.

“We are extremely pleased to announce this landmark sponsorship and to welcome Mackenzie as the umbrella sponsor of PGA TOUR Canada,” said PGA TOUR Commissioner Tim Finchem. “Mackenzie’s involvement will enable us to continue to strengthen and grow the Tour throughout Canada.”

“Golf has a strong and proud history in Canada and we are thrilled to be umbrella sponsor of the prestigious PGA TOUR Canada,” said Jeff Carney, President and Chief Executive Officer of Mackenzie Investments.

“As one of Canada’s largest investment management companies, we are pleased to help support and inspire athletes in their pursuit of excellence both through our sponsorship of Mackenzie Tour - PGA TOUR Canada and Snow Sports Canada. We are also excited to be part of an organization that has contributed more than $2 billion to charity and we look forward to partnering with the PGA TOUR and continuing the tradition of giving back to Canadians.”

The relationship provides a good strategic fit in regard to philanthropy as the PGA TOUR's well known charitable efforts, which has totaled $2.14 billion all time including a record $140.5 million in 2014, complement the goals of the Mackenzie Investments Charitable Foundation. In association with the new relationship, the 12 tournaments on the Mackenzie Tour will share a $150,000 donation being made to support their charitable efforts.

In addition to naming rights, Mackenzie Investments will receive a comprehensive list of benefits as umbrella sponsor, including client entertainment opportunities; branding on-site at tournaments; a strong presence on PGATOUR.COM, which includes a dedicated site for the Tour, as well as the TOUR’s mobile and social media platforms; plus ongoing exposure through the Tour’s half-hour highlight show in Canada, PGA TOUR telecasts and ancillary programming, and Sirius/XM Radio’s PGA TOUR channel.

This is the second significant sports sponsorship for Mackenzie Investments. The company has a long-term sponsorship with Snow Sports Canada, which was expanded earlier this year with a sponsorship agreement with three-time Olympic downhill racer Manny Osborne-Paradis.

This marks the first umbrella sponsorship for the Tour, which launched in 2013 as PGA TOUR Canada after the TOUR lent strategic and financial support to the former Canadian Professional Golf Tour the previous year. The new season begins this week with the PC Financial Open at Point Grey Golf & Country Club in Vancouver.

“This commitment by Mackenzie will provide long-term continuity to the Tour and impact the charitable mission of our tournaments,” said Jeff Monday, President of the Mackenzie Tour-PGA TOUR Canada. “By strengthening our Tour through Mackenzie’s support, our members will have a greater opportunity to pursue their ultimate goal of someday playing on the PGA TOUR.”

The five players who qualified for this year’s Web.com Tour, based on the 2014 Order of Merit, were, in order, Joel Dahmen, Matt Harmon, Timothy Madigan and Brock MacKenzie of the U.S. and England’s Greg Eason.

About Mackenzie Tour-PGA TOUR Canada
The Mackenzie Tour-PGA TOUR Canada is a series of tournaments played across Canada each summer, where tomorrow’s stars begin the path to the PGA TOUR. The leading five money winners at the end of each season earn status on the Web.com Tour for the following season. The Mackenzie Tour’s mission is to deliver a PGA TOUR experience for our members, fans, volunteers and our partners in order to develop the future stars of professional golf & enrich the communities we visit.