Plugged In The Hazard: No Glutes, No Glory 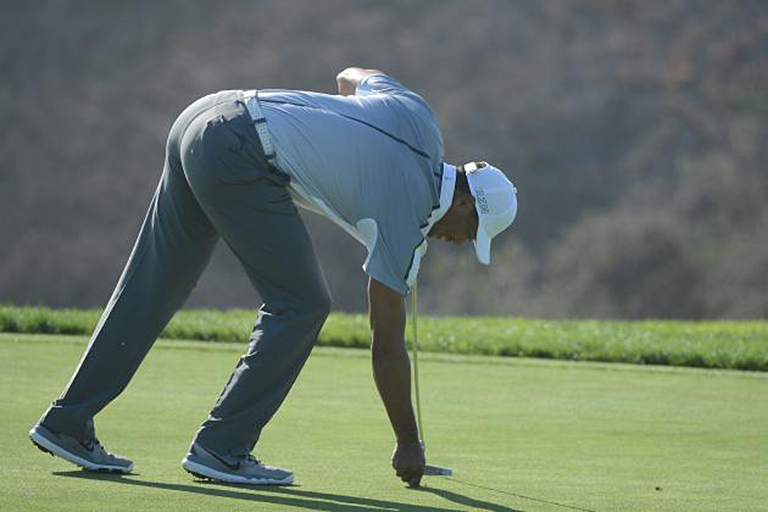 by Andrew Penner, Inside Golf (Humour)

News flash: going through an extended period of ‘suckage’ – ie: the plight of Tiger Woods – is not an unusual occurrence for high-calibre golfers.

There have, in fact, been numerous documented cases where a solid player – and when I say “solid” I don't mean the sand-bagging, two-time Low Net Champion at Bushwood – has lost his/her mojo.

One might actually argue that going through a drought – or a period where one's golf game more resembles cricket, field hockey, or some other type of rudimentary stick and ball game – is just about as normal as John Daly sporting 43 different colours in the same clothing ensemble.

Interestingly, golfers who are going through a slump actually have a lot to be thankful for.

For starters, if their golf game has taken a sudden and dramatic turn for the worse and is twirling around in the tank, it means that they are actually a good player to begin with.

Because bad golfers are already bad, they can't technically go through a slump. After all, they are always bad. And bad just begets bad. When it's rotten, it's rotten. Get it? So if a golfer is even capable of going through an extended period of stinkage, well, that is actually a good thing.

Not surprisingly, it works the same way in other sports. Take baseball. A .300 hitter can certainly go through a slump. And he probably will. However, a hitter who averages a buck twenty-five can't. He's in a state of perpetual suckage. The better the player, the better the slump. It's why Tiger's situation is so compelling.

Another way to look at it is this: a nice, plump, juicy piece of fruit has only one option in terms of what time will do to it. It will spoil. It won't get better. It will eventually get spots and rot.

It's the same for good golfers – and especially so for REALLY good golfers – they are like ripe fruit, so tasty and delicious, but just a shank – or a “glute not activating” - away from going mushy.

Of course, there is one significant flaw in this analogy. The rotten fruit can be made firm and healthy again. Yes, that's right, when it comes to golf (and baseball!), prolonged slumps can be overcome.

Just like some agronomic miracle, a genetically modified mutation gone horribly good, there can be renewal and rebirth, a new identity; a new-found game.

When this occurs - and, let's be honest, for Tiger Woods it might - it's quite a momentous occasion.

It's like the heavens opening up and glory shining down. It's like the clock turning back. It's like the fat lady standing on the clock getting ready to sing.... but then falling off the clock, banging her head, and going mute. And there's even a term for it - It's called “the comeback.”

And that's the other incredible thing about the prolonged period of suckage. Without it, there can be no comeback. No time warp. You know the saying: “no pain, no gain?” Well, for Tiger, it's “no glutes, no glory.”

Indeed, “the comeback” is one of the “good” golfers' deadliest, late-career weapons. And don't kid yourself, many greats who have gone on before – excluding your uncle Ralph – have demonstrated this. They are living proof.

Ben Hogan, one of the greatest players ever, had perhaps the best comeback of all. He survived a car crash that nearly took his life and came back to win six more major championships after the horrific ordeal.

So what are we to make of this, then? Is Tiger primed for a comeback? Will fist pumps and roars enter into the equation again? If history is any indication, it could easily be so. But first he needs to fix his glutes. And perhaps a few other things. And if he can't? Well, at least he can tell himself that he's a very good golfer.

Because only very good golfers can go through very good slumps.