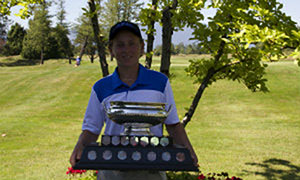 Tied with Trevor Yu at (-4) with one hole left to play, it looked like a play-off was imminent, but the 15-year-old Gudz, who hails from Victoria, showed incredible composure making a clutch birdie putt to claim the title.

“I improved a lot over the winter and had some good scores in the start of this year. I was looking good coming into this tournament and I just played really well,” said Gudz after his final round, noting he had never expected to win.

Gudz entered the final round just one stroke back of leaders Yu and Chris Crisologo after a sparkling 5-under-par 67 put him right in contention. His terrific performance carried over into the final round, starting with a birdie on the first hole. He briefly ran into some trouble with a bogey on the 435-yard par-4 16th, but for the fourth day in a row, he capped off his round with a birdie on the final hole.

“I wasn’t really expecting anything, I just stayed loose and played as good as I can, I guess. I was really happy,” he said, looking forward to representing BC at Nationals.

Yu finished T2nd with Curtis Chan. The 17-year-old playing out of Marine Drive Golf Club never dropped lower than second place all week, playing consistently posting scores of 69-71-72-72. He entered the Championship fresh off of a win at the CN Future Links Western Championship the previous week.

Chan played a remarkable final round, finishing the day 7-under par. He bettered his third round score by ten strokes to find himself in the top three. Chan did not represent BC at Nationals as he was already committed to the Boys’ Junior America’s Cup which conflicted with the Nationals in Niagara Falls, ON from July 29- August 1.

Alex Francois also declined the offer to attend Nationals in order to compete in the Boys’ Junior America’s Cup at Shaughnessy Golf and Country Club, he finished even par for the tournament, shooting 71-73-74-70  and was T4th with Jaewook Lee. Lee would then travel with Gudz and Yu as part of team BC at Nationals. The Langley golfer finished 1-over on the final day.

Marcus Brown and Ian Kim won the best-ball competition, a new addition to the 2014 Junior Boys’ Championship, with a fine 23-under-par 265. The pair only made one bogey over the four days of competition, finishing with their best score (65) on Friday.

Keaton Gudz and Josh Miller combined for only two bogeys themselves, finishing one stroke behind the leaders while Nick Krystal and Trevor Yu followed one shot further back at (-21).

The Zone Team Championship, which was held concurrently with the first and second rounds of the Junior Boys’ Championship, was won by Zone Four with a 2-under-par 430. Zone-appointed teams were identified before play began and the Championship used the best three of four scores for each day of competition. Crisologo, along with teammates Roy Kang, Alex Francois and Sy Lovan took home the title with a combined 5 eagles and 5 birdies.