Lu Comes From Behind To Win 112th B.C. Amateur In Playoff 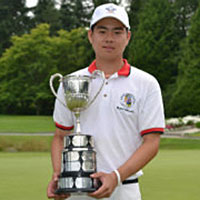 Lu birdied the final hole of regulation play; a 558-yard par 5, to finish Even (284) for the Championship tied with Michael Belle, and forced a sudden-death playoff to determine the 2014 champion.

The pair both struggled to find the fairway from the 18th tee, but recovered well with an exceptional short game as they each salvaged par on the first trip down 18 in the playoff.

Subsequently, each would make a birdie on the second go-round. They continued neck-and-neck until Belle bogeyed number 10 giving Lu the opportunity to putt for par and end the Championship. Lu then capitalized on the chance making a short putt to earn the privilege of hoisting the Bostock Trophy.

“Before he putted I was thinking ‘just make my putt’ because I know he’s not going to miss, but after he missed it I thought, ‘ok, now I really have to get this,’” said Lu. “On the fourth playoff hole I pulled my putt really hard, which was not good. So I was just trying to focus and make sure I made a good stroke. And I did.”

The 17-year-old entered the Championship with no expectations to win and opened with a (+1) (72) after struggling on the back nine. The following day he shot 73 and at the midway mark of the Championship was 3-over.

The Marine Drive member recorded a 1-under (70) on Thursday that still left him well back of the leader. “At the start of the day I thought, 'I’m four strokes back, I’m just going to focus on what I can do and just hit fairways and greens and hopefully make birdie,' ” he said.

Lu recorded five birdies on the final day of competition on his way to claiming the title keeping up with several players his senior boasting college-level experience. His summer season began strong after winning the individual title at the B.C. School Sports AAA Championship.

“[Winning these titles] makes me feel that my game has gotten a lot better. Last year I came in tied at 22nd in the B.C. Amateur so I’m just going to do the same thing at the Pacific Coast Amateur. Fairways and greens and hope for the birdie,” stated Lu, who was set to compete in Flagstaff, Arizona at the 48th Pacific Coast Amateur July 22-25.

Belle, 22, was either leading or co-leading for the entire tournament but finished 2-over par on the final day, conceding a share of the lead with four bogeys in his final round. The Vancouver Golf Club member started the Championship off with a bang, recording the first of four holes-in-one to be made during the course of the competition.

Jacob Vanderpas shot 2-under for the second day in a row to battle to a third place finish at 1-over. The 19-year-old was 5-over after two days of play but by tying the tournament low score of 69 on consecutive days, he fought his way into the top three.

Alex Francois and Adam Svensson finished T4th just a single stroke behind Vanderpas at (+2). Francois, 16, had his best showing of the Championship with a 2-under-par 69 on the final day. Svensson was (-3) at the turn but struggled with four bogeys coming home.

Earlier in the week it was announced that Svensson earned an exemption into Canada’s National Open Championship and would compete at Royal Montreal Golf Club alongside fellow B.C. Amateur competitor, Kevin Carrigan, who finished T7th at (+5).

Junior golfers Roy Kang, 15, and Alex Francois, 16, beat out 64 other teams to win the best-ball competition. Combined, the team shot a 19-under-par 265 that included a hole-in-one by Francois on the first day and a total of 19 birdies. As was noted when they received their awards, the most impressive number wasn’t the one on their scorecard, but actually their combined age of 31.

Two competitors recorded holes-in-one during the BC Amateur Championship as both Michael Belle and Alex Francois celebrated an ace, on number 11 and number 8, respectively, on the 6,405-yard par-71 course on the first day of competition. Belle, 22, an SFU senior recorded his third-ever hole-in-one on number 11, a par 3 set at 149 yards. Francois claimed the second hole-in-one of the Championship shortly after Belle; on number eight, a 159-yard par 3, with an eight iron. He had begun his round with back-to-back birdies. Francois finished T4th at the British Columbia Golf Junior Boys’ Championship the previous week at Meadow Gardens.

Senator Hewitt Bostock donated The Bostock Trophy in 1895 on the condition that it is awarded to the Amateur Champion of British Columbia and over the years, the trophy has been hoisted by some of the best amateur golfers in the Pacific North West. Past winners include Masters’ Champion and World Golf Hall of Fame member, Fred Couples who won the Championship in 1979, in addition to Canadian Golf Hall of Fame members, Stan Leonard, Ken Black and Jim Nelford.