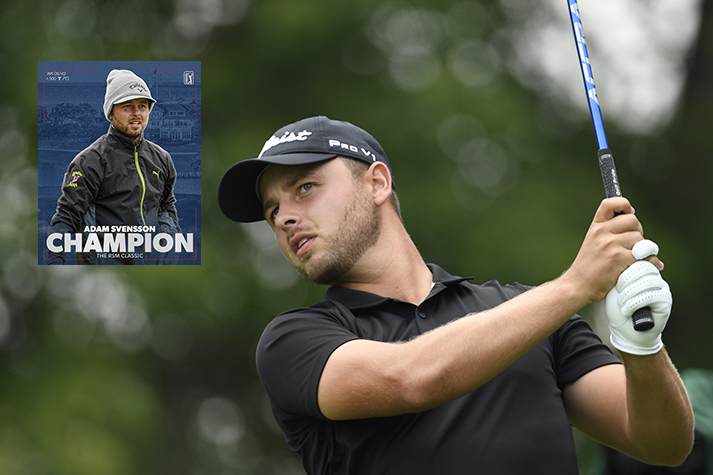 Childhood dreams do come true, sometimes when you least expect it. Just ask Adam Svensson. Winning wasn’t on Svensson’s mind when he began the second round of the RSM Classic in Sea Island, Ga. The 28-year-old Surrey native was in grind mode, simply trying to make the cut after opening the tournament with a disappointing one-over 73 at the Plantation course.

But just like he did years ago as a young British Columbia golfing prodigy, then later as a top amateur and collegiate player and more recently on the Korn Ferry Tour, Svensson produced a magical stretch of golf and earned the biggest win of his life.

He fired a six-under 64 in the second round at the par 70 Seaside layout to make the cut with a shot to spare, then added an eight-under 62 in the third round. He closed with a bogey-free 64 on Sunday.

“It’s amazing,” he said. “To shoot one-over and then to play how I did Friday, Saturday and Sunday. . .I am just so happy and thankful to win. It’s been a dream of mine since I was 10 years old, eight years old, it’s just incredible. It’s not about the money, it’s the feeling of coming down the stretch and winning and all that stuff. You just can’t beat it.”

Svensson was emotional, fighting back tears, in his greenside TV interview after winning by two shots with a score of 19-under par. “To be honest, it’s not even real right now,” he said. “I am just so happy. I have put so much work in and to win on the PGA TOUR means everything to me. It has been an up and down journey. I have had lows, I have had highs. I just kept believing in myself and here I am.”

That journey began on the fairways of golf courses like Hazelmere and Morgan Creek in his home town of Surrey and King’s Links in Delta. His father, Frank, introduced his son to the game at a young age and it wasn’t long before Adam was dominating his peers in junior competitions.

Svensson won three times on the Korn Ferry Tour. All that was missing was his maiden victory on the PGA TOUR and now that he has that, you wonder how many more might be in the future. Along with the winner’s cheque of $1.458 million, Svensson’s win at the RSM Classic comes with many additional perks. He’ll start the New Year in Hawaii at the Sentry Tournament of Champions at Kapalua on Maui and has a spot in the Masters and Players Championship.

A first-time winner on TOUR! 🏆

“I can pick my schedule freely now and I’ll be in some majors,” he said. “I have never played in a major championship, so that is pretty cool and obviously the Masters is sweet. But just to have the ability to pick and choose your schedule is pretty cool.”

Cool describes Svensson’s demeanor during a pressure-packed final round. He made two clutch birdies on the 16th and 17th holes to grab a two-shot lead. Walking to the 18th tee, Svensson knew the tournament was his to win. “I was pumped,” he said. “I was super excited. I knew if I just hit the fairway on 18 I could get it up there and make par or bogey.”

Svensson’s win came in what was his 70th start on the PGA TOUR. He credited a change in attitude he made after being demoted back to the Korn Ferry Tour after his first crack at the PGA TOUR in 2018-19 as being the catalyst for his breakthrough. Svensson made a commitment to work — really work — at his game and it has paid off.

Svensson and instructor John Graham have worked especially hard on his putting. He was pleased to learn that he led the field at the RSM in strokes gained putting.“The last six months I have put in a lot of work with my putting. For me, it was about making those short putts with confidence. I was kind of steering it here and there. When you have confidence with your putting you feel like you make everything and those two- and three-footers you just bang them in.

“There’s no greater feeling than putting the work in and slowly seeing results and, boom, one week it clicks. It is a better feeling than winning a million bucks.” Or in this case, 1.4 million.

BIG MOVE: The win vaulted Svensson into sixth place from 92nd in the FedEx Cup points standings, but he’s not the top Canadian. Mackenzie Hughes of Hamilton sits fourth. Fellow British Columbians Adam Hadwin and NickTaylor did not play the RSM Classic, which was the final event of the PGA Tour’s fall season. Hadwin currently sits 44th in the points race, while Taylor is 53rd.

LUCKY NO. 7: Svensson is the seventh British Columbian to win a PGA Tour event. The others are Nick Taylor, Adam Hadwin, Dave Barr, Richard Zokol, Stan Leonard and Ken Black.

SCHOOL DAYS: Vancouver Open champion Ilirian Zalli and fellow Vancouver residents Trevor Yu and Stephen Thomas failed to advance at an Asian Tour qualifying school in Sedona, Ariz. Zalli tied for 16th at three-under par in the 72-hole qualifier held at Oakcreek Country Club. Yu was another stroke back and tied for 19th, while Thomas finished 48th at 11-over par. The top 11 players and ties (14 players who finished eight-under or better) advanced to the final stage of Q-school. Kaleb Gorbahn of Smithers and Richmond’s Ziggy Nathu failed to earn status at PGA Tour Latinoamerica qualifying school in Mazatlan, Mexico.

CHIP SHOTS: Surrey’s Lauren Kim is 20th in Golf Channel’s ranking of the top 25 female college recruits for 2023. Kim, a member of Golf Canada’s national junior team, is headed to the University of Texas next fall. . .North Vancouver’s Eugene Wong shot a six-under 66 to beat Langley’s James Allenby by one shot and win a Vancouver Golf Tour winter event at Chilliwack Golf Club.