Wind Howls, Scores Soar At Talking Rock In BC Mid-Am 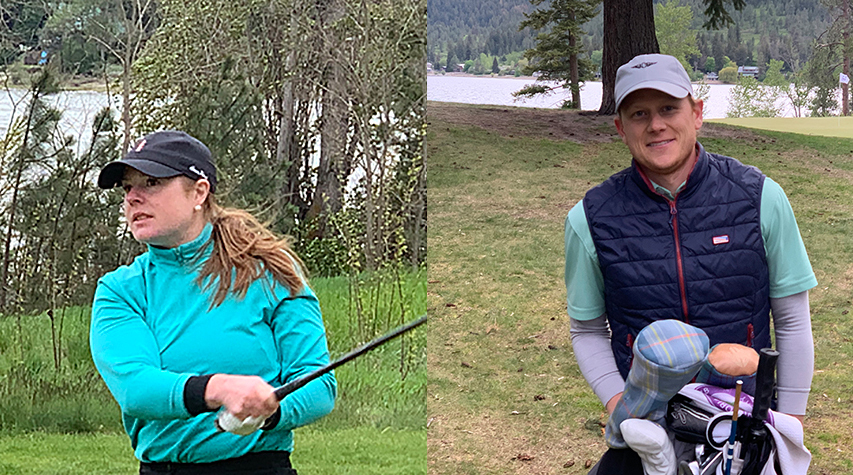 CHASE -- There were whitecaps on the water and lots of bogeys (and others) on scorecards Wednesday at Talking Rock Golf Course.

Those waves on Little Shuswap Lake were a warning to players at the B.C. Women’s and Men’s Mid-Amateur Championships that second-round conditions were going to be challenging. Make that brutal.

A bit of a morning breeze turned into an absolute gale in the afternoon. Throw in a little hail and unseasonably cool temperatures and Talking Rock presented an extremely stiff test.

Par was a very good score Wednesday. Actually, anything in the mid-70s was a good round among the afternoon starters. Not a single player in the field broke par Wednesday. Vancouver’s Nonie Marler, who shot an even-par 72 in Tuesday’s opening round, fired a six-over 78 Wednesday and takes a three-shot lead into Thursday’s final round.

Marler, the 2020 Mid-Amateur champion who plays out of Marine Drive Golf Club, said she’s never experienced wind like she faced over her closing few holes Wednesday. “We were in the middle of the pack today and the wind really picked up on the back nine,” Marler said.

“I walked off my ball two or three times on several shots because you just couldn’t trust your shot and commit to it. And then when you were ready to commit to it another gust would come up. It was a real test in the afternoon, that’s for sure.”

Marler hung on to her lead over reigning B.C. Senior Women’s champion Shelly Stouffer of Nanoose Bay thanks in part to a couple of nice birdies on the 16th and 17th holes in the howling wind. Stouffer’s five-over 77 was the low score on the women’s side of the draw.

“I play at Fairwinds (in Nanoose Bay) which is windy, but not this windy,” Stouffer said. “There was a couple of times that I had to back off because I felt like I was going to blow over. But I was pretty happy with the way I ended up playing.”

On the men’s side, Vancouver’s Andy Robb matched the low score of the day -- an even-par 72 -- and leads by one shot at one-over par. Robb, a 34-year-old who played collegiate golf at UBC, said he tried to block out the wind. “For me it’s about putting the ball on the fairway and putting the next one on the green” Robb said. “I did that fairly well today. I haven’t been playing a ton of competitive golf so it’s nice to put yourself out there and try this again.”

Robb just returned from a California golf trip where he played a number of top courses, including San Francisco Golf Club, Olympic Golf Club and Pasatiempo. “It was probably the most amount of golf I have played in one week in many, many years,” he said.

Billy Hole of Vancouver, Ed Bellrose of Campbell River and Mike Aizawa of Richmond are tied for second at two-over par. Patrick Weeks of Vancouver is alone in fifth place at three-over after he matched Robb’s 72. “Those are the toughest conditions I have played in since Royal County Down (in Ireland) where I shot an 86,” said Weeks, a member of Shaughnessy Golf Club.

Aizawa shot his second straight one-over 73 Wednesday. “Mentally, it was a grind,” Aizawa said. “I just really try to play with the wind. I know there are a lot of guys who to try to curve it into the wind or keep it straight. I just try to let nature take over.”

Hole, a 33-year-old who plays out of Point Grey, shot a three-over 75 Thursday. “It was kind of like just take a shot and hope for the best,” Hole said. “The hardest part was that it was swirling from different directions. It’s just about trying to stay below the tree lines as much as possible.”

Bellrose, the first-round leader, shot a five-over 77 in the calmer early part of the draw. “I kind of hope the wind picks up this afternoon,” he said after his round. And, of course, he got his wish.