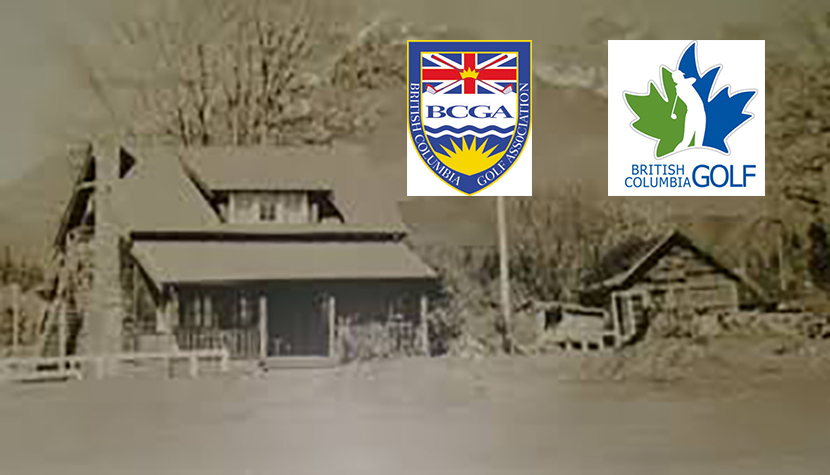 In November 1894, Hewitt Bostock donated $50 to purchase a trophy for a men’s amateur championship. Perhaps the new owner of The Province newspaper anticipated his trophy, the Bostock Cup, would enhance the growth of his new publication.

This competition was open to all players who belonged to a golf club on the Pacific Coast. In 1894 the few clubs that existed on the coast included Victoria Golf Club, United Services GC (Victoria), Vancouver Country Club, New Westminster GC, and the Tacoma GC. For the remaining years in the decade, few non-Victoria GC members participated.

In 1895 the Victoria GC commenced a ladies provincial competition played at the same time as the men’s. Like the men, all lady members from Pacific Coast golf clubs were eligible to participate. The men’s field varied from eight to 12 players and the ladies from four to eight.

Prior to World War I, the number of clubs in the Northwest increased to about two dozen golf clubs. Around 1910 Senator Bostock restricted the provincial championship to BC golf club members only. The province had about 10 operating golf clubs. Colwood GC, Jericho CC, Vancouver GC and Shaughnessy Heights GC regularly sent members to Victoria GC to participate in the provincial championships.

After World War I, the Vancouver clubs pressured Senator Bostock to rotate the championship amongst Colwood, Victoria, Shaughnessy, and Vancouver golf clubs. The requirement that the host club must be an 18-hole course remained in place, hence, Jericho CC never hosted the prestigious event until 1926 after it had expanded to 18 holes.

In 1921, a number of conditions arose leading to the formation of the British Columbia Golf Association.

First, golfers in the West felt they had very little influence with the Royal Canadian Golf Association (RCGA). The Manitoba Golf Association officials felt the western provinces required a regional body, the Western Canada Golf Association (WCGA), to represent them. In particular, Manitoba wanted to participate in the Willingdon Cup matches along with Ontario and Quebec.

The Manitoba golfers also wanted the opportunity to host a Canadian Amateur Championship. By speaking with one voice through their WCGA, the Alberta, Saskatchewan and Manitoba golf associations hoped their concerns would be considered. To make the WCGA function as one voice for Western Canadian golfers, Manitoba strongly urged club officials at Shaughnessy, Vancouver, Jericho, Victoria, and Colwood to form a BC Golf Association. 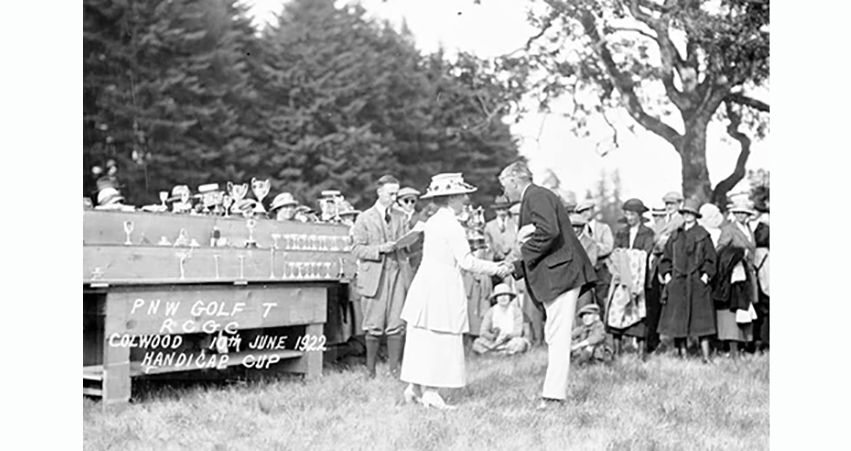 The PNGA Amateur Championships (for men and women) were held at Colwood Golf and Country Club in Victoria, B.C. It was at this championship that the British Columbia Golf Association was formally established. (City of Victoria Archives)

Golf clubs in BC did not feel it was necessary to have their own association because of their strong affinity to the Pacific Northwest Golf Association (PNGA). The golf clubs in Oregon, Washington and BC joined the PNGA. This regional body governed the rules, standardized the handicap system, and held the PNGA men’s and women’s championships.

Second, Mike Gardner, the captain of the host Vancouver GC, wanted to restrict the number of players participating in the 1922 BC Men’s Amateur Championship. He thought “the field would be more manageable if the eligible handicap was restricted to 14 and under.” Much to his surprise, he discovered Senator Bostock controlled the functioning of the event. Gardner became a strong advocate for a provincial golf body to oversee the operation of the provincial championships.

Third, after World War I golf began expanding rapidly throughout the province. By 1921 golf clubs in various regions of the province united into regional golf associations to hold a regional championship for men and women. Initially, these associations included the Crow’s Nest in the Kootenays, the Interior in the Okanagan, the Victoria District on the Island, and the Inter-Club Golf Committee for the Lower Mainland and the Fraser Valley.

To begin the process to form a provincial body, E.M. McLong, captain of Shaughnessy Heights GC, hosted a meeting in his law office, located in Room 502 of the Winch Building at the corner of Howe and Hastings on February 21, 1921. Attending this initial meeting were A.V. Macan, Victoria GC; K.A. McLellan and H.T. Gardner, Vancouver GC; F.M Chaldecott, Jericho CC; and C.A. Abraham, Shaughnessy Heights.

The attendees felt an association would be beneficial to the golfers of BC because, “Such an organization was necessary now in view of the growing popularity of golf on the coast; to arrange the British Columbia Championship and to promote an Open Championship; to draft a new set of regulations governing the play for the BC Amateur Championships; to bring the different golfing bodies in the province into closer unity; and to standardize the rules and handicapping in line with the other provincial bodies in the dominion.”

Macan spoke specifically on the necessity of going ahead with the movement to form a provincial organization “to assist in the growth of the popularity of golf throughout the province.” All the clubs would appoint two delegates to the association.

George Von Elm won the 1922 PNGA Men’s Amateur, held that year at Colwood Golf & Country Club (before it was given the Royal designation in 1931) in Victoria, B.C. During the week of the championship, the British Columbia Golf Association was officially founded. (Photo courtesy USGA)

On March 29, 1922 at the BC Amateur Championships hosted by the Vancouver GC, not all captains from the Victoria golf clubs could attend. The Vancouver newspapers reported, “For this reason, the final formalization of the new association was postponed until the PNGA Championships at Royal Colwood in June 1922.”

It should be noted the BCGA records presently show J.E. Hall as the president for 1922. Hall was only the interim president for two months. Biggerstaffe Wilson was the first official BCGA president, serving his term from 1922-1923.

It became the policy of the Association to elect each new president for the upcoming year at the BC Men’s Amateur Championship. Usually the president of the host club for the following year served the duel role as president of the BCGA and club president. Interestingly, after attending the BCGA formation meeting at Colwood, George Wise returned to Yakima to spearhead the movement amongst the nine-hole golf courses in Washington to form a similar State golf association.

The new association immediately opened the BC Championships to players who were members of golf clubs in Washington. The officials felt this would enhance the level of play at the BC Championship. During the 1920s and 1930s, players such as Clark Spiers (1923), Bon Stein (1925), Chuck Hunter (1926, 1929) and Tom McHugh (1928) won BC titles.

Vera Hutchings Ford won the PNGA Women’s Amateur in 1922, also held that year at Colwood. Ford was inducted into the PNGA Hall of Fame in 1991.

Vera Hutchings Ford won the PNGA Women’s Amateur in 1922, also held that year at Colwood. Ford was inducted into the PNGA Hall of Fame in 1991. (Photo by Northwest Golfer Illustrated magazine)

The new governing body also restricted a player’s handicap to 12 and under. To encourage players to participate from all regions of the province, the governing officials commenced the Hamber Cup Team competition. Clubs entered four-man teams into the BC Amateur in order to compete for this trophy. The gross score of the four players during the qualifying rounds determined the club team winner.

In 1929 the RCGA allowed provincial teams from provinces other than Ontario and Quebec to send teams to the Willingdon Cup Matches. The provincial teams competed for the Willingdon Cup during the qualifying rounds of the Canadian Men’s Amateur Championships. The BCGA selected the four-man team to represent the province. In the early years, the BCGA selected the team from players on the Island and the Mainland. Consistently, the BC Men’s Amateur champions automatically became a team member. One player from the Island and one player from the Mainland joined the team. The other members were chosen by their results in the City Championships in Victoria and Vancouver.

After World War II, the BCGA introduced the BC Men’s Closed Championship that limited participation to BC residents only. This would enable the Willingdon Cup selection committee to identify a BC champion. Gordon Bowers assumed the BCGA presidency for four consecutive years, from 1948-1952. During this period to promote golf, he introduced the BC Junior Men’s Championship.

To promote junior programs at the club level, the BCGA introduced the Maylor Avery Cup Club Team competition. This event operated in the same format as the Hamber Cup competition. To promote golf in each region, Bowers began the process for the BCGA to assume the functions the regional golf associations performed. By 1960 the Zone system for the various areas of the province was in place. These zone committees replaced the regional golf association.

In 1955 the BCGA became a registered provincial society registered under the BC Societies Act. And in 2011 the BCGA re-branded as British Columbia Golf.

About the Author
Michael Riste is the official historian for the PNGA, and is the lead volunteer curator for the BC Golf Museum. He co-authored the monumental PNGA centennial history book, “Championships & Friendships.”