Drive For Five On For B.C. At North Pacific Junior Ladies Team Matches 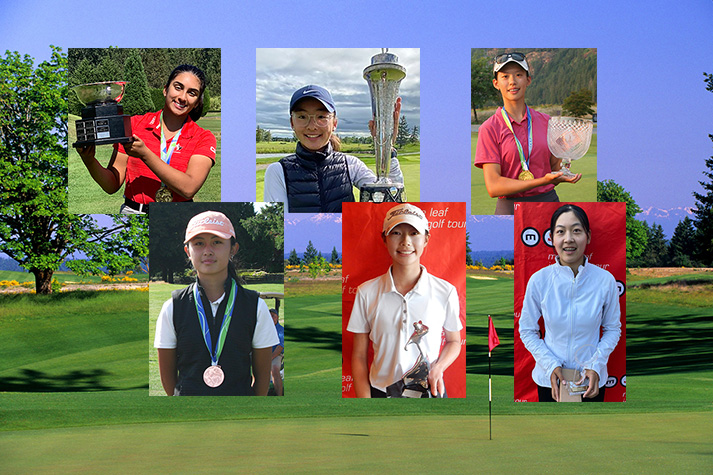 The long wait is over for Team British Columbia in its quest for a ‘five-peat’ in the North Pacific Junior Ladies Team Matches.

It was way back in 2019 that British Columbia won its fourth straight title in the annual competition that features junior teams from B.C., Washington, Oregon and Idaho.

B.C.’s drive for five was put on hold when the 2020 and 2021 matches were cancelled due to the Covid-19 pandemic. Now, finally, the matches are a go and scheduled for May 28-29 at The Home Course in Dupont, Wash.

British Columbia is sending what looks to be a strong squad to this year’s competition. The B.C. team includes four national team members in Angela Arora of Surrey, Yeji Kwon of Port Coquitlam, Luna Lu of Burnaby and Martina Yu of Coquitlam, as well as Tina Jiang of Richmond and Katherine Hao of Burnaby.

“I am very excited about having four Team Canada members,” says Rivershore Golf Links head professional Kate Weir, who is head coach of this year’s North Pacific team. “I didn’t necessarily expect that they would all say yes as they already have pretty busy schedules with Team Canada. But luckily they were interested in playing, partly because B.C. has a winning streak going, and it’s one of the only match play events they get to play in, which is good prep for them for U.S. Junior Girls and the U.S. Women’s Amateur.”

The North Pacific Junior Ladies Team Matches are modeled after the Curtis Cup matches for amateur women. All competition is match play with the front nine worth one point, the back nine one point and the overall 18 another point. Six four-ball matches are played on opening day with six foursome (alternate-shot) matches played the final day.

Weir, who was an assistant coach when B.C. won its fourth straight title in 2019 at Quilchena Golf Club in Richmond, says the match play format leads to more aggressive play. “In stroke play you always have to be concerned that you are not making big numbers because that can obviously make a big impact on your overall score,” Weir says.

“But in match play you have a bad hole, you might lose that one hole but you get to move on to the next hole with a fresh start almost. So you can be a little more aggressive going for those birdies, going for those par 5s in two with the hope that even if you make a mistake you have holes going forward you can make up on. You get to have a little bit different mindset that way.”

All six players are North Pacific team rookies, but all have plenty of competitive experience. Arora, the 2020 B.C. Junior Girls champion, enjoys match play and has actually played some at The Home Course. She was the stroke play medallist at the 2021 PNGA Women’s Amateur at The Home Course and advanced to the quarter-finals of match play.

“I love match play,” says the 17-year-old Arora, who is heading to Indiana University this fall to play her collegiate golf. “It is my favourite format. It is different from stroke play, for sure, because it’s like hole by hole. Sometimes you need to be aggressive versus if it was stroke play you’d think more about your whole score.”

Arora and others on the team need no reminders about B.C.’s winning streak at the North Pacific matches. “I am aware of our winning streak,” Arora says. “It’s time for a fifth one in a row.”

Match play will be a new experience for the 16-year-old Kwon, the winner of the 2020 Alberta Women’s Amateur. “I haven’t played in any match play event before so this is going to be my first,” says Kwon. “I’m really excited about it. I feel like it’s going to be a really good experience. This will be team match play, we’ll be playing with a partner, so I feel like we’ll need a lot more communication. In stroke play it is individual play and you just focus on your own game.”

Weir has organized Zoom meetings with the team to help prepare for the event. The players will get one practice round before the event, but Weir hopes they’ll do some course preparation in advance. “Unfortunately, with how busy everyone’s schedules are, we’re not going to get a ton of in-person time, but we’ll do a few Zoom meetings and I am going to put it back on them a little bit to do some advance course scouting. You can do so much online with Google maps and be able to look at the course that way.

“And we’ll have a rules and format meeting as well so the girls can learn from (British Columbia Golf president) Greg Moody, who is one of the premier rules officials, and he can go over specific match play rulings with them and then we can talk strategy in terms of how these formats differ from what they usually do.”

Weir, of course, wants her team to win. But she also wants them to enjoy what she hopes will be a special experience. “Honestly, it is really fun watching the players come together and have a really good time,” she says. “The camaraderie between them is great and it’s nice to see them actually getting to work together as a team versus just playing against each other like they usually do. It’s just a lot of fun seeing them excel and learn in that kind of environment.”

Kate Weir is the PGA of Canada Head Professional at Rivershore Estates & Golf Links in Kamloops, BC and was honoured as the 2019 PGA of BC Apprentice Professional of the Year. Kate has been a British Columbia Golf coach since 2016 and includes on that resume a role as North Pacific Junior Ladies Team Matches Assistant Coach in 2019, the last year this competition was played with BC winning the event at Richmond's Quilchena GC. Weir also was the BC Summer Games Head Coach for Zone 4 in 2016 & 2018, taking home the Gold medal on both occasions.

"I'm very excited to be named coach for this team. I had a blast as the Assistant Coach in 2019 and really look forward to taking this team down to the event. It's an incredibly fun event and one of the only match play events they will get to experience in their junior careers," says Weir.

Acknowledging the fact that Team BC has its eyes on a fifth consecutive victory in this competition, Weir said, "Yes of course there is pressure as we are multi-time defending champions. But as the event hasn't been contested in three years, each team is going to have a very new roster of players so I think we will all be in the same situation with a bunch of players who haven't played a lot of match play. Having the winning record of the past will serve as great motivation because these girls are highly competitive and will want to carry on the winning tradition."
And as for who will make up that new roster of players for BC she said, "I've watched all of the girls play a few times and have met some of them. I have known one or two of them since they were very young. There is definitely some getting to know each other to do, but that's what we will use the next few weeks to do... get prepped and find some chemistry."

Michelle McCann is an Associate Professional at Uplands Golf Club in Victoria and runs their Junior Program. Michelle has a Bachelor of Business Administration in Human Resource Management from Camosun College and she is a certified instructor and coach with a multitude of certifications in both disciplines. McCann started out in Junior golf and proceeded to play Varsity golf. She has focused her career on growing the game and creating good community members through junior golf.

"I'm honoured to be named assistant coach for the BC Team, this is such an exciting and prestigious event and I am very much looking forward to it," said McCann. "In-person coaching opportunities have been few and far between with the global situation these past few years and as my love for coaching grows, I cherish the opportunity to travel and compete internationally. I look forward to taking a group of talented young junior girls down to Washington and I hope that we can use past performances by team BC as motivation to continue our winning streak."

As far as player selection goes, "At this point, prior to team selection I am not sure who will be on the team, but I do know some of the young women on the radar. Once team selection is completed we will be planning some team building events both virtually and in person to start creating a cohesive team. I look forward to bonding, and building strong, lasting relationships with a group of fantastic young women," said McCann.

CHIP SHOTS: B.C. won the 2019 competition with 15 points. Washington was second with 11.5, while Oregon finished with six points and Idaho earned 3.5. . . Chaewon Baek of Langley, Euna Han of Coquitlam, Lauren Kim of Surrey, Tiffany Kong of Vancouver, Angel Lin of Surrey and Angela Zhang of Vancouver represented B.C. in 2019.