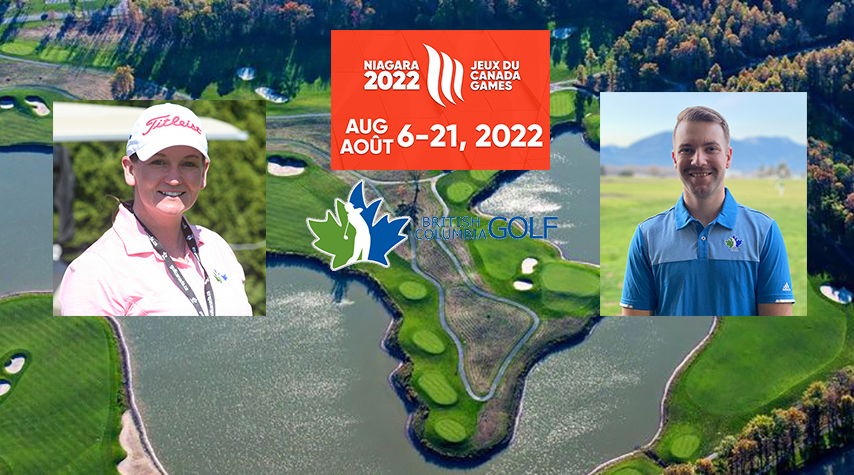 With the Canada Summer Games back on the schedule this year, following its postponement in 2021 due to the Covid -19 pandemic, British Columbia Golf is pleased to announce the selection of the coaches who will be in charge of our province's team heading to Niagara, Ontario August 6th - 21st.

Golf is being played the second week from August 14th - 21st, and will feature two events. Both the team event and individual event will be played at the Legends on the Niagara Battlefield Course in Niagara Falls with four rounds of play.

Golf joined the Summer Games sport program in 2009, and has been on every summer program since. https://niagara2022games.ca/

"I am incredibly excited to help represent Team BC at the 2022 Canada Summer Games. I have had the privilege to coach at several BC Summer Games, and have always enjoyed the multisport experience," said Greggain. "The Canada Summer Games will compete on a national scale, with more athletes representing their provinces, and expectedly more excitement. Representing Team BC is a huge honour, and I hope to once again bring home the gold for our province!"

According to British Columbia Golf Player Development Manager, Debbie Pyne, "Coach Jennifer is integral to the success of Team BC at the 2022 Canada Summer Games in Niagara, Ont. Her abilities are top-notch, given her national and provincial background as a coach. Even though this is her first appearance as head coach at a Canada Games, she’s no stranger to high level performance."

Here are just a few of Jennifer Greggain's personal highlights:

"The opportunity to represent British Columbia and Team BC at Canada Summer Games is an honour," said Stewart. "Team BC has had tremendous success in previous games, and I am excited to contribute to the goal of bringing home gold. To be able to work alongside coach Jennifer Greggain and the best young golfers in our province is something I am really looking forward to in Niagara."

Player Development Manager Pyne had this to say about Stewart, "Cody Stewart is going to be an excellent addition to our provincial coach roster in 2022. He is totally committed to coaching and assisting the BC Team to a gold medal win at the Games. Cody’s current coaching duties at UFV will prove invaluable to the elite juniors on Team BC. He’s knowledge of golf fitness as a kinesiologist is exceptional and this could benefit us in the long run."

Pyne also added, "I’m looking forward to working with Cody and Jennifer as we build-out our performance strategies for the team. The competition from Quebec and Ontario will be formidable, we will need to bring our “A” game to the 2022 Canada Summer Games."

Here are some of Cody Stewart's personal highlights: