The First Golf Club in Vancouver 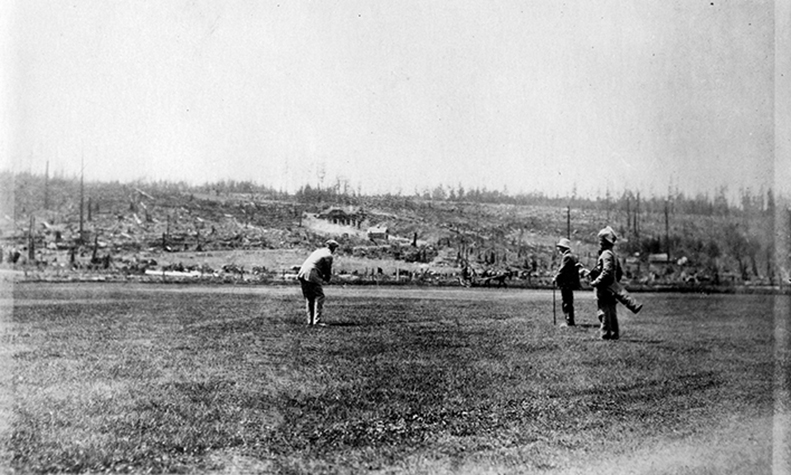 British Columbia Golf is pleased to share an article that will be published in the November 2021 Vancouver Historical Society newsletter, accompanying the promotion for renowned Pacific Coast golf historian Michael Riste’s lecture on Thursday, November 25th at 7:00 pm on Zoom.

Readers are welcome to join the lecture, they would need to email the VHS (Vancouver Historical Society) to ask for the link. Instructions to register can be found at the end of the article.

The First Golf Club In Vancouver

It’s been a good year for golf in Vancouver and all across the country – so was 2020. Statistics from Golf Canada, the Canadian sport governing body, indicate that rounds of golf played are up by almost 22% since 2019. That’s a lot of golf. You may ask yourself, “Why is so much more golf being played over the past 18 months?” The answer is Covid.

When most other sports were forbidden for fear of virus transmission, golf proved to be the ‘safe’ sport. Played in the great outdoors with ample room for physical distancing, no touch contact with other players on the course, and little to none with one’s foursome, golf became the great respite from the constant fear of contracting Covid while still being physically active.

But even before Covid, golf has been looked upon as one of the healthiest physical activities available to all demographics from school kids to the most senior of seniors and all levels of ability.

In 2021, the R&A together with the USGA, the world-wide governing bodies of golf, estimated there were 6 million golfers in Canada and something like 31 million world-wide.  A 2009 peer-reviewed study in Sweden indicated that golfers on average live five years longer than non-golfers.

Long before the Swedish study, Dr. Benjamin Rush (1745-1813), a signer of the American Declaration of Independence, exclaimed “Golf is an exercise which is much used by a gentleman in Scotland……A man would live 10 years the longer for using this exercise once or twice a week.”

People have been playing golf since the 15th century at least. The first mention of golf is in Scotland in 1457 when the parliament of King James II banned the sport -  it was seen to be a distraction from military training. Although it seems no one paid much attention to that ban, it wasn’t until 1502 that King James IV became the world’s first golfing monarch. And golf took off from there.

King Charles I brought the game to England, and Mary Queen of Scots introduced it to France. The term ‘caddie’ comes from her military aides, known as ‘cadets’.  Using the French pronunciation, say the word ‘cadet’; you can’t argue it doesn’t sound like ‘caddie’.

The Victorian Industrial Revolution and the birth of the railway allowed people to travel more easily around the British Isles and soon golf courses started popping up all over the countryside. Although the sport was played mostly by the upper classes, the Industrial Revolution allowed the mass manufacture of golf clubs and balls and opened golf up to the middle classes.

At our November 25 Vancouver Historical Society lecture, we’ll learn from Michael Riste, renowned Pacific Coast golf historian, how the first organized golf course in Vancouver came to be. In 1892, the Jericho Golf Club was founded by three Vancouverites – Henry Ogle Bell-Irving, a Vancouver industrialist who was born in Scotland and came to the Granville Townsite in 1885; Campbell Sweeny, who opened the first Bank of Montreal in 1887; and English-born Francis Miller Chaldecott, a Vancouver lawyer and landowner, who helped organize the municipality of South Vancouver.

You might be surprised by what Riste shares about the origins of golf in Vancouver, the Jericho Golf Club - thought by many to be the first organized golf club west of the Mississippi, and what happened to the club and its various locations over its 50-year lifespan.

If you’re interested in tuning in to the online lecture on the History of the Jericho Golf Club on Thursday, November 25th at 7:00 pm via Zoom, we invite you to send an email to presidentvhs@gmail.com to register for the lecture.