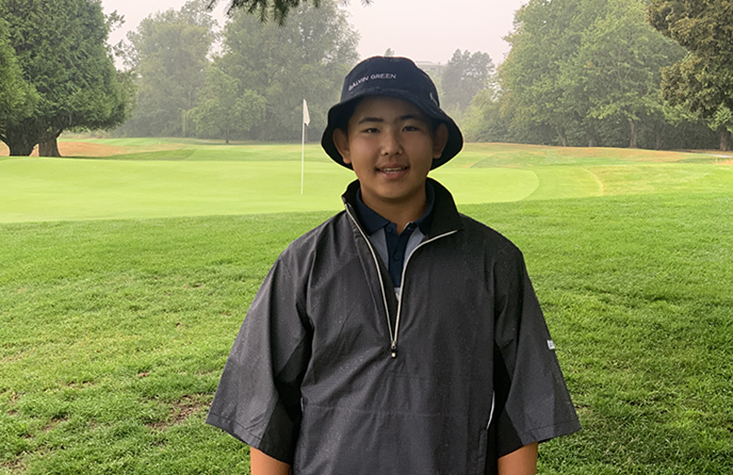 These kids get good fast. As Exhibit A, we present 12-year-old Alex Zhang. The Beach Grove Golf Club junior shot a three-under par 68 at Langara Golf Course in Vancouver on Monday to take the first- round lead at the B.C. Bantam Boys Championship for players aged 14 and younger.

The Richmond resident had four birdies and just one bogey and was proud of the way he handled Langara’s tricky greens. “I didn’t have a three-putt,” Zhang said after completing his round in some heavy rain. “My speed control was good. I was pretty happy with my round. The course isn’t too tough, but the greens are pretty tricky. You have to try and leave the ball in the right spots because there are lots of big ridges.”

Katherine Hao of Burnaby shot an even-par 71 and leads the Bantam Girls division.

Zhang is enjoying quite the summer. He made an impression at the recent Canadian Junior Boys Championship in Quebec, where he made the cut and tied for 45th. “It was a good experience because I got to play with a lot of great players and I was able to see how they play,” said Zhang, who is heading into Grade 8 at Magee Secondary.

Zhang began playing when he was eight and describes his game this way: “My iron play is good, I generally hit them pretty straight, and my putting has improved a lot. I can hit it 250 or 260 off tee.” He has plenty of growing to do, of course, so that number will continue to climb. The shot of the day belonged to Coquitlam’s Roy Baek, who after what he called a terrible drive on the par 4 first, holed his approach for eagle.

“I had 187 yards and I hit a 5-iron around the trees and the people beside the green said it went in and I was like, really. I couldn’t really believe it,” Baek said. “But when I went up there it was in the hole. I was pretty happy about it.” Baek shot an even-par 71 and shares second place with Zachary Auramenko of Campbell River.

Hao had a terrific front nine that was highlighted by an eagle on the par 5 third hole. The 14-year-old reached the green in two and rolled in a 15-foot putt for eagle. She made the turn at three-under but struggled with her putting on the back nine. “I wasn’t hitting greens on the back and I left myself some really long putts,” Hao said.

“So it’s kind of hard to two-putt all of them. But I came back and got a birdie on 16 and made two pars to finish my round. The greens are so slopey and I feel like the speed was changing because it was raining and then it was dry.” Hao is coming off a tie for second at last week’s B.C. Juvenile Girls Championships at Golden Eagle Golf Club in Pitt Meadows.

Grace Aoting Yao of West Vancouver, who was fourth at the Juvenile tourney, is one shot back of Hao after firing a one-over 72. “I didn’t make a single birdie today,” said Yao. “All my putts were just lipping out.”

The B.C. Novice Championships for players aged 12 and under are also being contested at Langara. Zhang leads the Novice Boys division by five shots over Jeevyn Lotay of Burnaby. On the Girls side, Ceci Lang of Vancouver carded a 2-under 34 on the back nine to post a 5-over 76 and holds a 2 shot lead over both Miranda Lu of Vancouver and Kelowna's Tierra Elchuk.

Both the Bantam and Novice championships are 36-hole events that conclude on Tuesday.