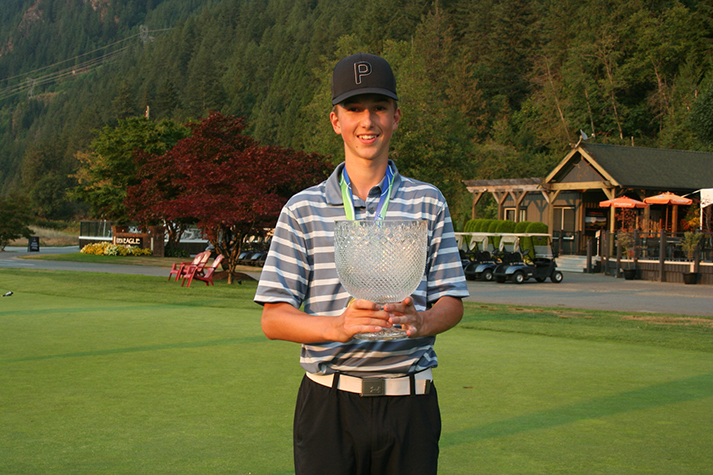 PITT MEADOWS -- It wasn’t that long ago that Matthew Wilson was having trouble breaking 100 in zone tournaments on Vancouver Island. Back then, the thought of becoming a B.C. champion wasn’t on his mind. He was just happy making a few pars.

My, how things have changed in a relative hurry for the 15-year-old from Nanaimo who is the new B.C. Juvenile Boys champion. Wilson shot a tournament-best four-under 66 in the final round to win the championship for players 16 and under by five shots at Golden Eagle Golf Club’s South Course.

Pinch him. He doesn’t quite believe it. “It is pretty shocking,” Wilson said. “Not even last year did I see anything like this happening. I wasn’t very good when I started playing as a junior. I would go out and shoot 100.”

But things have changed in the last 18 months for Wilson. Like so many of us, he started playing more golf when the COVID-19 pandemic arrived. A lot more. “I started playing every single day and I just got so much better,” said Wilson, who is heading into Grade 10 at Wellington Secondary in Nanaimo. “It has been a long journey. I played 130 days in row this year. Every day after school.”

That’s right, from March 15 until one day late in July, Wilson played every day, usually at his home course, Nanaimo Golf Club. “Then I took two days off to go mountain biking in Whistler,” he said with a smile.

All that practice paid off at Golden Eagle. He finished the tournament at five-under par, five shots better than runner-up Shunkichi Yamamoto of Victoria. But for much of the day, it was much closer. Wilson and Yamamoto were tied to start the final round and they were still even after nine holes. 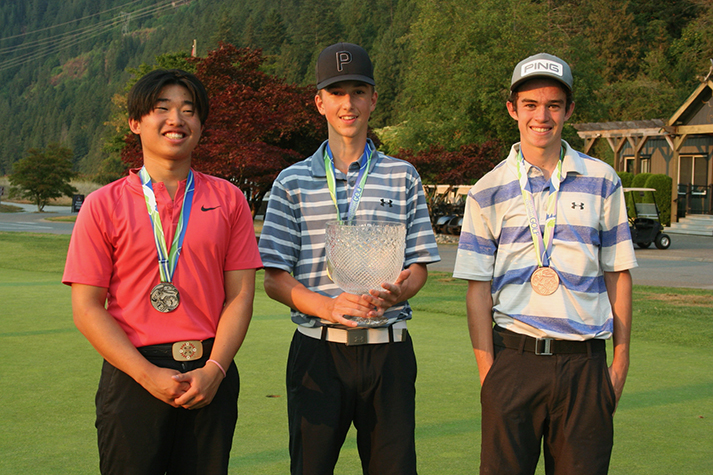 Things changed on the par 4 10th, where both players flew the green with their approach shots. Yamamoto failed to get up and down and made a bogey. Wilson chipped in for birdie. “I think that was the big turning point,” said Yamamoto. “He started running away with it from there.”

The final round was played in temperatures that topped 40 degrees. Competitors had umbrellas raised for their entire rounds to shield themselves from the sun. Wilson got just the kind of start he was looking for as he birdied the first hole and then added another on No. 3. “I had a pretty bad bogey on six, I was greenside chipping for eagle, but the next hole I drained a 50-footer for birdie and that got me going. I was just pedal to the metal from there.”

Golden Eagle’s South Course is exceptionally tight and Wilson did a nice job all week of keeping it in play. “I didn’t lose a golf ball the whole week and that’s probably the best part. And today I made a lot of big putts.” Wilson is now excited about his golfing future. “Hopefully I can play in a lot more tournaments and give myself more chances to win, of course, and hopefully get a good scholarship when I am older.”

Yamamoto, who plays out of Gorge Vale Golf Club in Victoria, was disappointed with his back-nine finish, but felt he learned some lessons that will help him in the future. “It was his day today,” Yamamoto said. “I am happy about how I played this week. Of course it is disappointing to finish second, but I think my game has grown a lot this year and getting a silver medal is nice.”

Vancouver’s Forrest Van Alstine finished third at two-over par after closing with a three-over 73. A better-ball competition was also contested this week. The team of June Hsiao of Coquitlam and William Tu of Vancouver won with a 54-hole score of 16-under. That was three shots better than the teams of Jagre Knight of Parksville and Matthew Wilson of Nanaimo and Luna Lu and Nathan Szpakowicz of Vancouver.