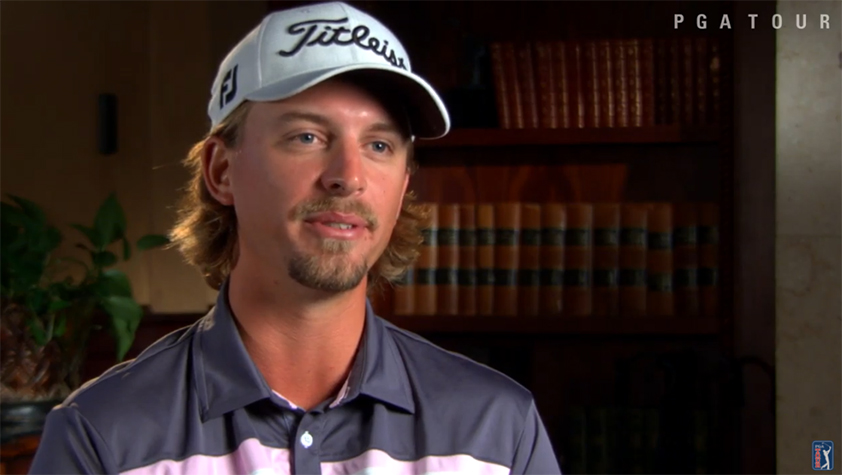 Merritt’s Roger Sloan recorded his first top 10 of the season Sunday, but will need another strong finish at this week’s final regular-season event to secure his full exempt status for next season on the PGA TOUR.

Sloan finished sixth at the Barracuda Championship in Truckee, Calif., and moved up six spots to 131st on the FedEx Cup points list. He needs to move inside the top 125 to remain fully exempt for the 2021-22 season. This week’s Wyndham Championship in Greensboro, N.C., completes the PGA TOUR regular season.

Sloan and many others in the field will have a lot riding on their play in Greensboro. Sloan has momentum on his side. He has been playing well of late, having made five straight cuts and eight of his last nine.

Sloan started his final round nicely at the Barracuda, which uses the modified Stableford scoring system. He collected 11 points on his first eight holes with an eagle and three birdies.

He lost some of that momentum when he double-bogeyed the 11th hole, but recovered nicely with birdies on three of his last seven holes and finished the event with 40 points, 10 behind winner Erik van Rooyen of South Africa.

It was Sloan’s second top 10 at the Barracuda Championship. He tied for seventh at the event in 2019. Sloan, who made $126,875 on Sunday, has made two of three cuts in his previous appearances at the Wyndham Championship.

The Abbotsford duo of Nick Taylor and Adam Hadwin both missed the cut at the Barracuda. Hadwin dropped five spots to 112th on the points list, while Taylor fell two spots to 149th. Taylor remains exempt through next season due to his win at the 2020 AT&T Pebble Beach-Pro Am. Taylor and Hadwin are both playing at the Wyndham.

If Sloan fails to crack the top 125, he’d still likely draw into as many as 15 PGA TOUR events next season. He’d also have an opportunity to play in the three Korn Ferry Tour Finals events, where 25 PGA TOUR cards will be available.

SEASON FINALE: The Korn Ferry Tour also wraps up its regular season at this week’s Pinnacle Bank Championship in Omaha, Neb. Vancouver’s Stuart Macdonald, who missed the cut at last week’s Utah Championship, and Surrey’s Adam Svensson, who took last week off, are both in the field this week. Svensson has his PGA TOUR card locked up for next season, while Macdonald has clinched a spot in the Korn Ferry Tour Finals.

OFF TO NATIONALS: A strong British Columbia contingent led by B.C. Junior Boys champion Gavyn Knight of Parksville will compete at this week’s Canadian Junior Boys Championship at Vallée du Richelieu in Sainte-Julie, Que. Other notable British Columbians in the field include 2020 B.C. Junior and Juvenile Boys champion Willy Bishop and Jeevan Sihota, both of Victoria. Past champions of the event include two-time PGA TOUR winner Nick Taylor of Abbotsford, who captured the 2006 title by 11 shots.

OFF TO OAKMONT: The 121st playing of the U.S. Amateur Championship goes this week at Oakmont Country Club in Pennsylvania. Three Victoria residents, Craig Doell, James Swan and Jackson Rothwell, are among 13 Canadians scheduled to compete. The field of 312 players will be cut to the low 64 for match play, which begins on Wednesday.

COQUITLAM STRONG: A.J. Ewart was second and fellow Coquitlam resident Henry Lee tied for third at last week’s Canadian Men’s Amateur Championship at Ambassador Golf Club in Windsor, Ont.
Ewart spent the entire tournament at or near the top of the leaderboard and finished the event at 15-under par, two shots behind winner Max Sekulic of Rycroft, Alta.

Lee was another shot back at 14-under and tied for third with Calgary’s Brendan MacDougall. Victor Choi of Courtenay (T14) and Duncan’s Tristan Mandur (T20) both finished inside the top 20. Next year’s Canadian Men’s Amateur will be held at Point Grey Golf & Country Club in Vancouver.

NO TITLE DEFENCE: New champions will be crowned at this week’s playing of the B.C. Juvenile Boys and Girls Championships at Golden Eagle Golf Club in Pitt Meadows. Past champions Willy Bishop of Victoria and Surrey’s Angela Arora, both now members of Canada’s national junior team, are no longer age-eligible for the 16-and-under Juvenile category. This week’s 54-hole competition will be held on Golden Eagle’s South Course.

Fleming, who won the 2012 B.C. Amateur Championship at Swaneset Bay in Pitt Meadows, earned $10,000 for the win. Stinson took home $6,650. Zach Olson of Chilliwack Golf Club tied for 13th at 14-under par and made $1,737. In the 54-hole PGA Seniors Championship, Victoria’s Jim Rutledge tied for eighth at five-under par, seven shots behind winner Dennis Hendershott of Ontario.