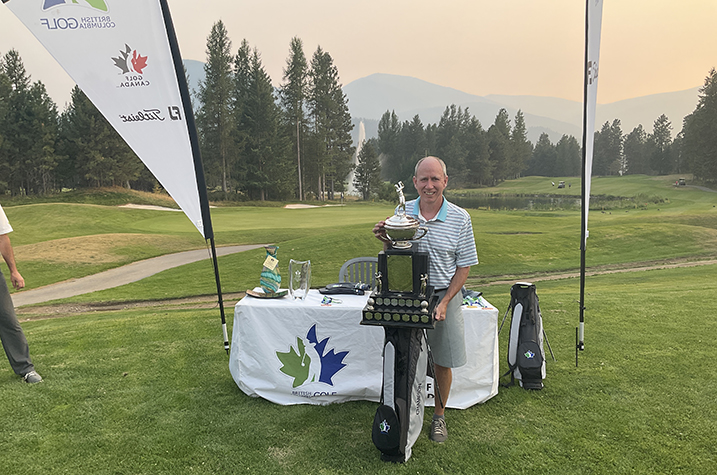 North Vancouverite Michael Kennedy's goal to start the day in the final round of the BC Senior Men's Championship was just to put in a good performance and have a shot at maybe making the BC Senior Men's Provincial Team. He most certainly accomplished both...and more.

He started the day 3 shots back of 36-hole leader and defending BC Senior Men's Champion Norm Bradley but a bogey free 2-under par front nine by Kennedy closed the gap to one and helped set the stage for some real excitement in the home stretch.

Gibson, BC's Mike Mannion had been the closest pursuer to Bradley after a pair of 2-under par rounds of 70 saw him just one back going into the final round. It created an, 'It's anybody's tournament' feel, with the back nine promising to be a battle to the end. It more than delivered.

Kelowna's 63-year-old Bradley had tussled with Mannion last year at Sunshine Coast Golf & Country Club, where he struggled down the stretch before eventually beating Mannion in a playoff to win his first provincial championship.

This time around it would be the same...only different. Kennedy would bogey the 400-yard par 4 10th, only to have Bradley return the favour on the par 3 12th. Bradley then subsequently made back-to-back bogeys at the 14th and 15th at which point it may have started to seem like déjà vu all over again. At that stage Kennedy had a two shot advantage and would stretch it temporarily to three with his birdie on the par 3 17th.

The 59-year old Kennedy, who plays out of Seymour Golf & Country Club in North Vancouver, where he has been a member since 1976, played the final 8 holes in 2-under par to post a 3-under 69 on the day and later said, "I had no idea of the standings out there.

"I was really focused on trying to play my own game and wasn't aware at all through the day what the standings were, obviously focused on playing well and taking advantage of the opportunities, but really did not expect to be tied for the lead after 18. That was a big surprise to me." 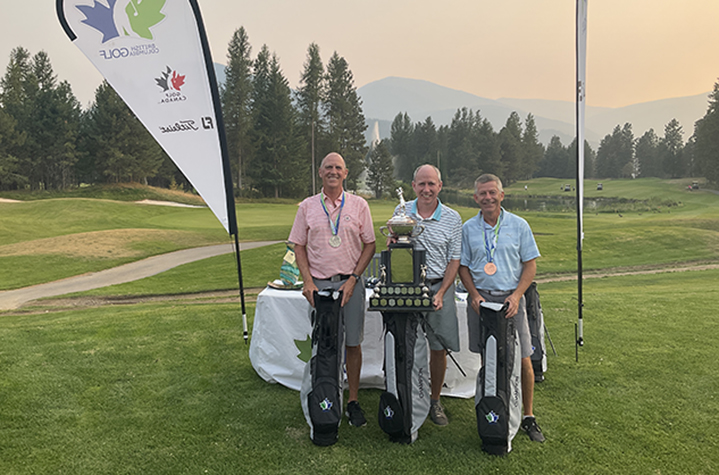 Whereas it looked like Kennedy would actually have a nice edge having made birdie on 17, it was Norm Bradley's turn this year to finish strong as he strung together 3 finishing birdies on 16, 17 and 18 where he got up and down from the bunker to make the birdie that propelled him into the playoff.

Finishing one shot out of the playoff and in solo third was Mannion who, after carding a double-bogey on the par 3 7th followed by a bogey on eight, created some excitement of his own with a birdie on 17 and an eagle on the 72nd hole. Alone in fourth place was Burnaby's Neil MacLeod at 3-under while Vancouver Island's Jim Shaw (Sooke) and J. Stephen Watson (Nanoose Bay) rounded out the top 5 at 2-under.

Kennedy, meanwhile, viewed the playoff as a bit of a bonus and felt it may have been even more of a comfortable atmosphere for him stating, "You know I was just...to be honest, excited to make the playoff. It felt fairly comfortable, more comfortable in the playoff than in the round.

"It was nice to have the opportunity to be in a playoff with someone like Norm. I felt a little more... I don't want to say I felt like I was going to win, that wasn't the case, I just felt more comfortable. It was great just to be in the playoff."

Kennedy used that comfort level to guide him through the extra two holes that would be required as they played number one and then the second before it was decided. "We both parred the first hole and then on the second hole I really hit a great drive," said Kennedy, who then continued, "...it's a par five and I was sure I'd hit my second shot into the greenside bunker and was quite surprised when I got up to the green and found it had carried the bunker and held on the green. So that was a pleasant surprise, and I managed to 2-putt from a little over 40 feet."

That coupled with Bradley having to settle for par was the difference as Kennedy captured his first British Columbia Golf provincial title. "This is the first BC Golf win for me, so it's certainly an honour, very exciting."

This was Kennedy's first trip to Bootleg Gap, so he was pleased to have gotten in a couple of practice rounds at the beginning of the week, "It's a challenging course, there's birdie opportunities but there's also trouble lurking on a lot of holes out there." Asked if the course suited his eye he did admit that the left to right layout fit well with his preferred shot shape of a slight fade.

Not only was the design of the course a pleasant surprise in terms of suiting his game, but the eventual win was also, as he said it was,"Very unexpected, a bit of a shock. I have passion for the game and it's been really nice getting back into competitive golf. In the BC Seniors, the camaraderie out here is fantastic. I came here focused on my game but certainly wasn't expecting this, so it's a nice surprise."

In the Super-Senior portion of the competion for players aged 65 and older, Burnaby’s John Gallacher put together a final round of one-over 73 to finish the tournament at even par and win by 5 shots over North Vancouver resident, Banks Scott.

Notes: In conjunction with the Senior & Super-Senior events there was also a Better Ball competion won by Mannion and Invermere's Harry Ferguson. The Zone competion was won by Kennedy, Gallacher, MacLeod and Pemberton's Lance Lundy while the Net Stableford component went to Dave Mansi of Victoria. Next year's BC Senior/Super-Senior Men's Championship will be held at Uplands Golf Club in Victoria.