KIMBERLEY -- A couple days after he won last year’s B.C. Senior Men’s Championship, Norm Bradley found himself on the receiving end of a playful jab from two-time PGA TOUR winner Dave Barr. Both are members at Kelowna Golf & Country Club and Bradley was walking by the first tee as Barr was just about to begin his round.

“He was standing on the tee and as I walked by he said, ‘So, you can’t play with a lead, eh,’" Bradley recalled with a chuckle after his second round Wednesday at Bootleg Gap Golf Course. “That was just a funny line, but he was also making a point. Playing with a lead is not easy.”

The 63-year-old Bradley learned that last year at Sunshine Coast Golf & Country Club, where he stumbled down the stretch before beating Mike Mannion in a playoff to win his first provincial championship.

Bradley hopes he learned something that day because just like last year he has the lead heading into the final round of the B.C. Senior Men’s. He carded a one-under 71 Wednesday and sits at five-under par through 36 holes of the 54-hole championship.

Bradley hopes he can draw from his experience last year when he played with the lead. “I have been working on playing the last nine, six, three holes. . .that has been one of my focuses this year,” Bradley said. “I learned a lot last year. I have taken that learning to all of the rounds I have played his year and hopefully I take that learning to the final round tomorrow if It’s crunch time down the stretch.”

Bradley had a steady round on Wednesday, when he made 17 pars and one birdie. “And the one birdie I made was the most improbable putt,” he said. “It was on the 12th hole. It was long and up the hill and it just trickled in. Beyond that, I didn’t make any putts. But I didn’t miss any par putts either. And I got a break on one hole where I hit a tree rather than going into a hazard. It dropped down and I made par. I think any time you can follow a good round and be under par the next day, that's all you can ask for.”

Mannion’s round was a little more eventful. He had five birdies and two bogeys. We had to look that up, because the 58-year-old Gibsons resident insists he no longer thinks about his score during a round. 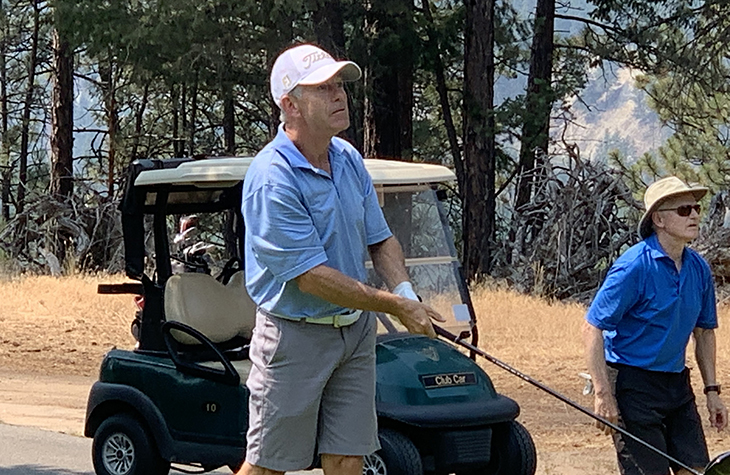 “I found in the old days I used to watch my scorecard too much and I’d start thinking about numbers and it would get into my head,” Mannion said. “So now I just try to fill in the box and go to the next hole. When these guys (at the scoring tent) tell me my score, they go 34-37 for 71 or whatever, I honestly don’t know. I don’t look any more.”

Mannion feels good about his game. Recently retired, he has been doing lots of practising. And he’s added some distance with a new driver. “I broke my driver the other day and I got a new Titleist driver and it has been fun. I have gained yardage. They always tell you that you are going to gain yardage with a new driver and I never did. But I gained yardage with this one. I can hit it really high so with the trees around here I can look at going over them on the corners. That is fun. I have got length now that I didn’t ever have.”

Mannion used that length to birdie the par 5 18th hole. He hit a choked down 9-iron from 134 yards to set up his two-putt birdie. Four players -- J.Stephen Watson of Nanoose Bay, Kerry Grittner of Chilliwack, Michael Kennedy of North Vancouver and Dave Gazley of Richmond share third place at two-under par. Gazley fired the tournament’s best round, a five-under 67, on Wednesday to move into contention.

“I just love this golf course,” Gazley said. “My wife’s family used to own a place here and (British Columbia Golf chief executive officer) Kris Jonasson is a member of my club in Richmond and I bugged him to bring the Senior or Mid-Am here. It's a great golf course and I got a few good breaks and some putts that dropped today. It was a fun day.”

Burnaby’s John Gallacher has a four-shot lead in the Super-Senior Championship for players aged 65 and older. Gallacher fired a three-over 75 Wednesday and sits at one-under par through 36 holes. Ken Walchuk of Radium Hot Springs is alone in second at three-over after his 73 on Wednesday.

The leaders will tee off at 1 p.m. in Thursday’s final round.