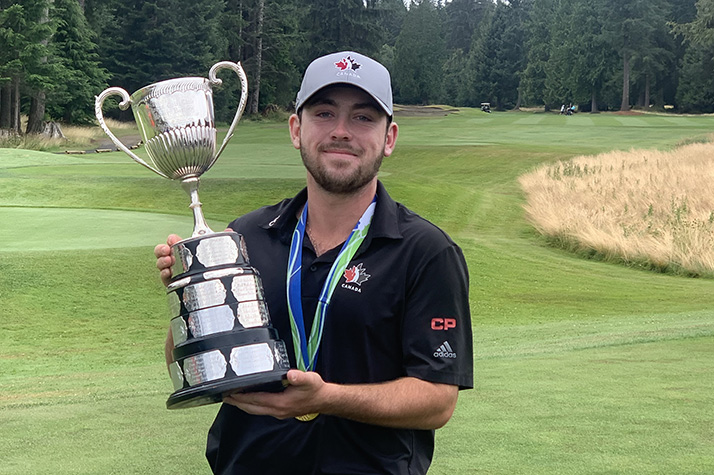 CAMPBELL RIVER -- Ashton McCulloch’s round had already gotten off to a nice start when he stepped up to the fifth tee in the final round of the B.C. Amateur Championship at Storey Creek Golf Club. It was about to get a whole lot better.

The par 3 5th was playing 183 yards and McCulloch surveyed the wind before taking dead aim with his 6-iron. All he did then was knock the ball into the hole for an ace. The eagle had landed and it helped propel the 18-year-old to his victory in the 119th playing of the championship.

“It was a little uphill into the wind, so it was just a little off of a six-iron,” McCulloch said. “It landed about five feet short and checked up and I looked away for a second and when I looked back it was gone and everyone was celebrating. It was exciting, for sure.” It was McCulloch’s third hole-in-one and his second in a tournament.

McCulloch hails from Kingston, Ont., but for the past few months has called Victoria home. He plays out of Bear Mountain as part of Golf Canada’s national junior team. He came to Storey Creek fresh off a win at last month’s Glencoe Invitational in Calgary. His win at Storey Creek was something of a repeat performance. Like he did in Calgary, McCulloch came from behind.

He began the day four shots behind third-round leader Patrick Weeks of Vancouver, but caught him with a brilliant five-under 67 that left him at nine-under par. Weeks finished two shots back in second place after his final-round 73. “I had in mind that I wanted to get it to 10-under,” McCulloch said. “That was my goal at the start of the week. I thought 10 would get it done. I think I finished at nine, but I knew I had to go low today.” 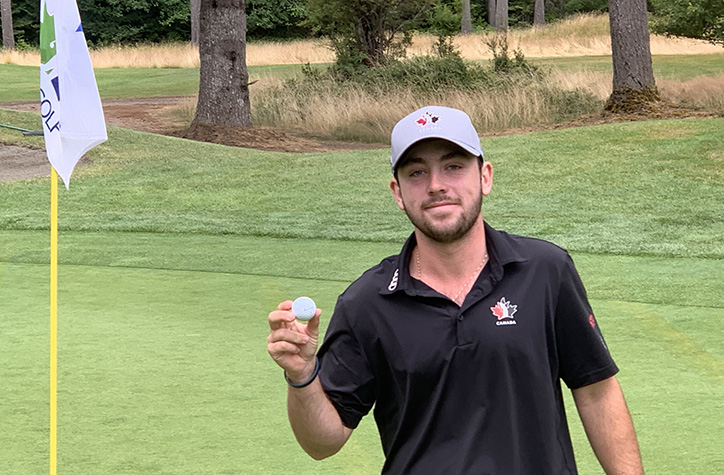 McCulloch got his round started with a birdie on the par 5 fourth hole, followed that up with his ace on No. 5 and made two more birdies on the seventh and eighth holes. He was seven-under through his first 16 holes before his only real hiccup of the day, a double-bogey at the par 3 17th when his tee shot bounced off a branch and into a penalty area fronting the green.

McCulloch had his own cheering section during the final round as he was followed by a number of cousins and other family members. “It’s a huge honour to win this tournament,” he said. “There are a lot of great players out there and to come out here and play well means a lot. I have been staying with my cousins and to play well in front of them is perfect.”

McCulloch displayed considerable patience all week. He respected Storey Creek’s tight fairways and sloping greens, often opting to select conservative targets. “The first three days I really didn’t play my best golf,” he said. “I scrambled really well, I got a score in every day which was really a key to me staying in the golf tournament because I wasn’t playing that well.

“I just picked really conservative targets and was just trying to shoot something around par. I got three scores in, 71, 70 and 71, the first three days, so those were good with me not even playing a B game. Today I played really well, especially for the first 16 holes. Seven-under through 16 was some good golf for sure.”

Weeks, who had at least a share of the lead all week, was done in by a costly four-putt on the ninth green that resulted in a double-bogey. “I just wasn’t used to a gallery and I kind of rushed that (third) putt and missed the hole by about a cup,” he said. “Other than that, I was really happy with how I played today. I kept it together. Most of these guys I am playing with are hitting it 40 or 50 yards by me so I have to just kind of wedge my way around.” 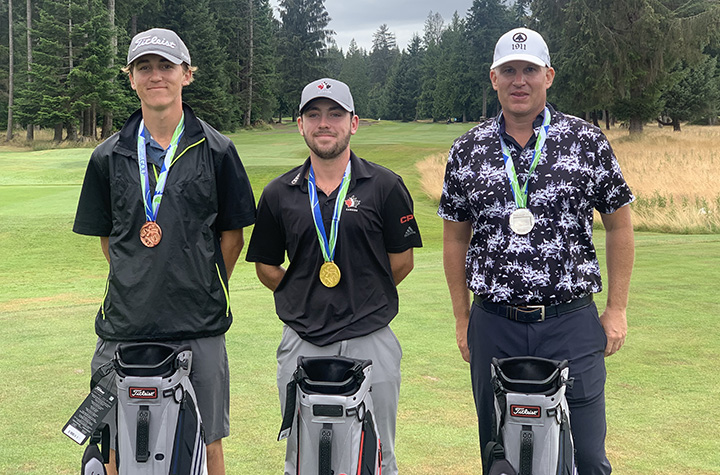 McCulloch had already posted his nine-under total as Weeks was playing the par 5 18th hole. Weeks needed to hole his third shot for an eagle from 50 or 60 yards to force a playoff. “I took dead aim and flew it right over the flag so I was happy with that,” said Weeks, who plays out of Shaughnessy Golf & Country Club. “At the beginning of the week had I known I was going to finish seven-under, I would have taken it. This is by far my best four-round tournament. I am really happy with that.”

Parksville’s Gavyn Knight, who earlier this month won the B.C. Junior Boys Championship at Morningstar, made three straight birdies late in his round to finish third at six-under par. Coquitlam’s A.J. Ewart was fourth at four-under par. “I had no clue where I was at,” Knight said. “I was just trying to hit shots and make as many birdies as possible. Third (place) is not bad at all. I would have taken that at the start of the week for sure.”

McCulloch is the first non-British Columbian to win the B.C. Amateur since Alberta’s Riley Fleming captured the championship in 2012 at Swaneset Bay in Pitt Meadows. Although there is no provincial team competition being held at this summer’s Canadian Men’s Amateur Championship, Weeks, Knight and Ewart were named to the British Columbia team.

A two-man better-ball competition was also contested this week and the Courtenay duo of John Robertson and Matt Hamilton won with a score of 27-under. Weeks and his partner Cory Hilditch of Osoyoos were second at 24-under.

CHIP SHOTS: Adam Veenstra of Smithers had the day’s best round with a six-under 66. He tied for 11th at one-over par. . .McCulloch will begin his collegiate golf career this fall at Michigan State University. Next year’s B.C. Amateur Championship is scheduled to be played at Christina Lake Golf Club.