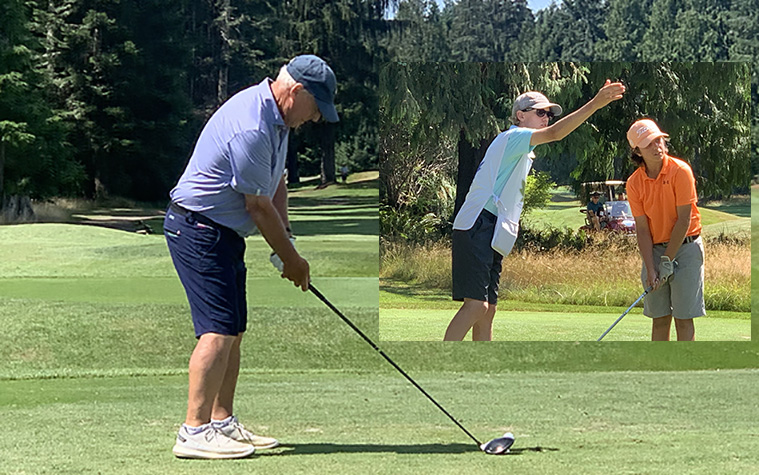 One Is A 13-time Winner Of The B.C. Amateur, That Would Be Doug Roxburgh On The Left, And Another Is A 13-Year Old Competing In His First B.C. Am, That Would Be Hunter Auramenko In The Orange Shirt On The Right With His Brother And Caddy, Zack - Image Credit Brad Ziemer/BC Golf

CAMPBELL RIVER -- On the ninth green Wednesday afternoon at Storey Creek Golf Club, Hunter Auramenko and his older brother Zach both got down on their bellies a la Camilo Villegas to read a putt. Hunter and Zach were grinding to make the cut in the 119th playing of the B.C. Amateur Championship.

Hunter, at age 13 the youngest player in the field, ended up missing by a single shot. But he is not going to let that spoil a special experience at the course he and his brother have grown up playing on.

Auramenko got into the field via Sunday’s supplemental qualifier at Storey Creek, where he shot a four-over 76. His 14-year-old brother Zach shot a 78 and didn’t make it. The brothers had a little bet going.

Zach was happy to honour that commitment and did his best to guide his little brother around Storey Creek. Hunter shot rounds of 75 and 77 to finish at eight-over par. They came agonizingly close as the cut to the low 70 players and ties came at seven-over par. Hunter appreciated the support he got from his big brother. “If I was just doing it by myself it probably would have been a lot more of a struggle like on reads and stuff,” he said.

“During our practice rounds we went over every hole and wrote down what breaks where. He was really into that, so that really helped me. We talked through every single shot before I hit it.” Zach acknowledged he had hoped to be playing this week, but enjoyed helping his brother in first B.C. Amateur experience.

“It was lots of fun to be out there even though I wasn’t playing,’ Zach said. “I was just trying to give him good vibes, good positive energy and also from a course standpoint help with reads and figuring out the wind. Stuff that a caddie would do normally.” Their proud mom, Treena, walked the course the final seven holes after she got off work. “I’s fun for a mom to watch,” she said. “He would have rather been playing, but Zach relished that (caddie) role once he got into it.”

Meanwhile, the oldest player in the field was making a return to a tournament that has been such a big part of his golfing life. After 53 straight appearances -- and 13 wins -- Doug Roxburgh had to miss last year’s B.C. Am. Now 69, Roxburgh came to Storey Creek with one goal in mind: make the cut for the 51st time in his 54 starts.

That turned out to be no trouble at all. Roxburgh fired a tidy one-under 71 and is tied for 15th at two-over par through 36 holes. His round finished with a birdie -- his fourth of the day -- when he rolled in a speedy 10-foot downhill putt. His best shot may have come on the par 4 ninth, when Roxburgh hit a delicate pitch from well left of the green to tap-in range to save par.

“I made a couple of sloppy bogeys early, but then kind of found something from about the sixth hole in,” Roxburgh said. “I was three-under from there. Hit lots of good shots and had some good opportunities on the back nine. That up and down on nine really saved the round and then I made a nice birdie on 10 to keep the momentum going.” 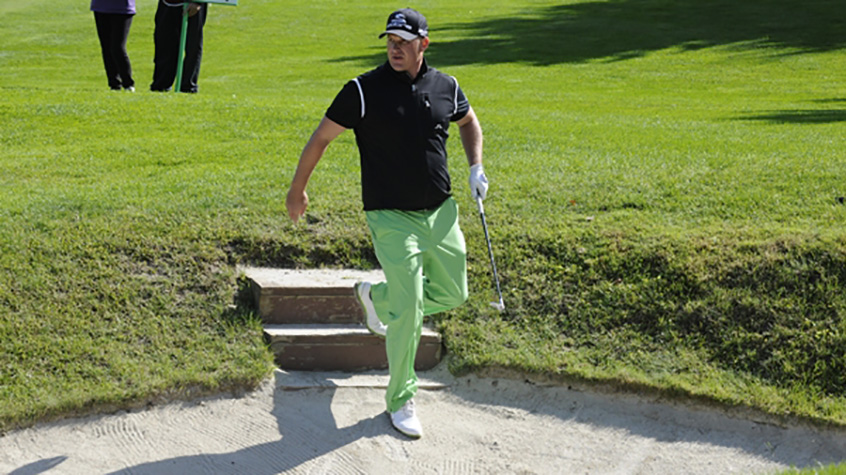 While Auramenko and Roxburgh were doing their thing, Patrick Weeks was grabbing the 36-hole lead in impressive fashion. Weeks, a 42-year-old Vancouver realtor who plays out of Shaughnessy, followed up his opening round of 67 with a 66 late on Wednesday to sit at 11-under at the halfway mark. That’s four shots better than Matt Hamilton of Courtenay, who fired an even-par 72 Wednesday.

“I just had really good distance control with my irons today,” Weeks said. “The greens firmed up and I started just trying to chase it up the middle and letting it bounce. When we teed off you could hold the greens, but by the end of the round they were catapulting forward by 15 or 20 feet.” Weeks also gave credit to his wife Jenny, who is caddying for him this week. “I made a deal with my wife that every birdie I make she gives me a kiss. I was making her pay up on every hole.”

Weeks had eight of them on Wednesday and most were from close range. “I only had one long birdie putt,” he said. “They were all inside about five or six feet.” Coquitlam’s A.J. Ewart is alone in third place at four-under after an even-par 72 on Wednesday.

CHIP SHOTS: The team of Hunter Phelan of Victoria and Jim Shaw of Sooke and the Courtenay duo of Matt Hamilton and John Robertson share the halfway lead of a two-man better-ball competition that is also being contested this week.