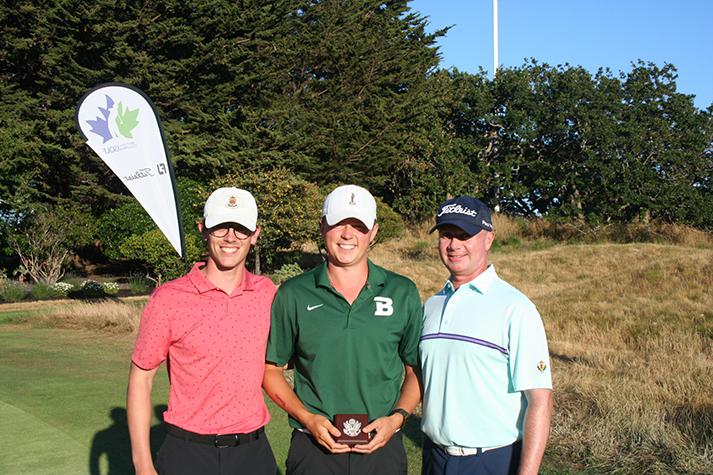 A pair of Victoria Golf Club members made good use of their home-course advantage to earn spots in next month’s U.S. Amateur Championship.

Jack Rothwell, the 2019 B.C. Amateur champion, and Craig Doell, for many years one of this province’s top amateurs, punched their tickets to what will be the 121st playing of the U.S. Amateur Aug. 9-15 at Oakmont Country Club in Pennsylvania.

Another Victoria resident, James Swan, claimed the third spot that was available for the 77 players who teed it up Monday.

Rothwell was the medalist, shooting rounds of 68 and 69 to finish at three-under par. Doell and Swan each finished at one-under. “To do it here is obviously pretty special,” said Rothwell. “I’m ecstatic.”

Rothwell and Doell both acknowledged that having such an intimate knowledge of Victoria Golf Club helped them earn their spots on Monday.“That was the ace up my sleeve today,” Doell said. “I have played here so many times. I know it pretty much better than anyone else. It was definitely nice to play your home course in a qualifier.”

“I have seen most of the pins they had out there,” added Rothwell. “There were some that the USGA put out there for us today that were definitely new to me. They set up the course very tough today, but I think very fair. I was happy to get it done here at my home track.”

The 20-year-old Rothwell will be returning to Babson College, a private business school in Massachusetts, this fall after taking a year off. He said he leaned on his putter Monday to earn his spot. “I putted quite well,” he said. “I didn’t hit the ball the best, but I left myself in the right spots, I hit some really good approach shots and took advantage of the true greens here.

“I am really looking forward to playing Oakmont. One of my really good buddies, James Swan, claimed the other spot. I am going to get to hang out with him and Craig, who is somewhat of a Victoria Golf Club legend. I have played with him a bunch. I’m pretty excited to go down there with those two guys.”

The 49-year-old Doell, a Victoria investment adviser, will savor the opportunity to finally play in his first U.S. Amateur. “I have tried qualifying twice before and not got a spot,” he said. “It’s great. For me at my age, this is likely one of the last opportunities I will have at playing in the U.S. Am. It is one of the top tournaments in the world to play in, so it’s great to have that opportunity.”

Doell played his usual steady golf at a course he has called home for a good part of his life. “I hit a lot of good shots today,” Doell said. “I think I only missed five greens through the two rounds today in the wind. So I didn’t have many up-and-downs to make and I had a lot of two-putts.”

Swan is an Esquimalt High School graduate who just completed his freshman year at North Idaho College. He matched the low round of the day with a three-under 67 in his second round Monday to claim his spot.

CHIP SHOTS: Duncan’s Tristan Mandur, who will defend his B.C. Amateur title next week at Storey Creek Golf Club in Campbell River, missed forcing a playoff by one shot. He finished alone in fourth place at even-par and is first alternate.