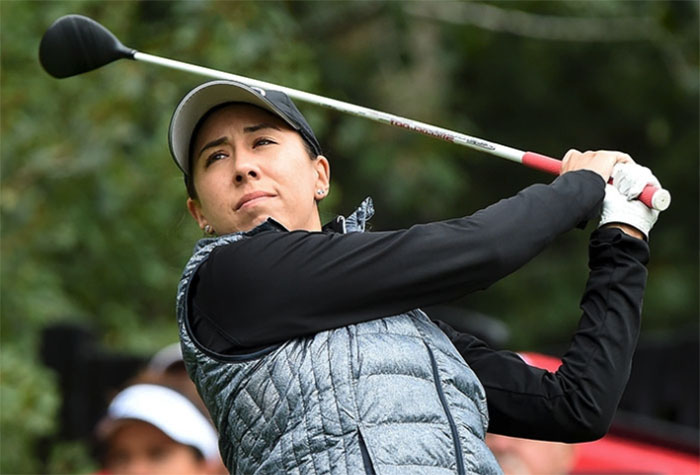 For much of her life, the only accounting Jessica Wallace did was adding up her score at the end of a round. That usually didn’t take too long. Wallace became a very good golfer at a young age, winning two B.C. Junior Girls Championships before playing collegiate golf at Pepperdine University and the University of Colorado.

She turned pro and played on the Symetra Tour for four and half years. Wallace called it quits after her most successful season in 2016 and decided to put her business degree to work. She landed a job with Deloitte and became a chartered public accountant. Little did she know that her new career path would take her back to a very familiar place.

Wallace is back at the golf course, but these days she is more focused on assets and liabilities than birdies and bogeys. Last November, Wallace became controller at Pitt Meadows Golf Course.

“I knew once I got my CPA designation that I wanted to make my way back into sports in some capacity,” she says. “It’s what I am passionate about. . .I thought I might as well keep a look-out because jobs in the sports industry don’t open up very often and I stumbled across the Pitt Meadows posting on Indeed.

"I just had a notification setting for sports jobs so I was getting a lot of random jobs like volleyball instructor, fitness instructor and then it just said accountant controller for Pitt Meadows Golf Club and I was like, 'I can’t say no to that.' It’s actually the only job I applied to. I am living in Langley right now, so not only is it in golf, it is close to where I live. It couldn’t have been more of a perfect fit.”

It didn’t take Wallace long to run into a familiar face at Pitt Meadows. That would be Susan White, the club president at Pitt Meadows who recently retired from her job as British Columbia Golf’s tournament director. White has known Wallace from her days as a junior golfer and was delighted to see her join the Pitt Meadows team. She knew the club was getting a quality person.

“I first met her as a young new golfer, I think it was at Chilliwack Golf Club at a junior girls event, and she was just an infectious, energetic, excited little thing and still is that way,” White says. “Needless to say I was pleased when she accepted the position at the golf club.”

Wallace says it’s been great to re-connect with White, who was a presence at so many of the tournaments she played as a junior golfer. “You know what, originally I had no clue Susan was here,” she says. “It wasn’t until they called me in for an interview that they mentioned that. I didn’t speak with her until after they had hired me.

"As soon as I was hired I reached out to Sue. It’s a small world and she was happy to have me on board. I have got to play golf with her since then. We go all the way back to junior golf and it’s been great to have a chance to thank her for all the work she has done for junior and amateur golf in Canada.”

After getting comfortable in her new job, Wallace lately has been trying to get out to play some golf at Pitt Meadows. “The first few months I was getting used to things and wanted to get a handle on things so I wasn’t really playing,” she says. “But the last couple of months I am trying to get out a bit, even to play nine holes. You get the golf bug again when you start hitting balls.

“They have been super-flexible with my hours. It is kind of one of those things where I can work earlier in the day or later in the day, whatever it takes to get the job done. They have encouraged me to get out and play with members. I played with Tuesday morning ladies club. It is great to meet the members. I played with a member who is 82 and has been as member here for 40 years and I watched her make a birdie on a par 3. It is really cool.”

The members are impressed when they realize how good a player their new controller is. “They are interested to hear what it was like playing and I am happy to share the experience because it is such a big part of what I have done and what I love doing. I hope they have enjoyed playing with me as much as I have playing with them.”

Wallace’s timing couldn’t have been better for her new job. The COVID-19 pandemic has helped create a golf boom, so it’s a perfect time to be a golf course controller. “It is crazy how many people are playing golf right now,” she says.

“It’s tough to get a tee time right now and I am really getting to see first-hand just how busy the course is. But it is great to see. I played one day at Pitt Meadows and I played with someone who just picked up golf at the start of the COVID. He played some pitch-and-putts and then decided to get a membership here.”

Wallace has no regrets about giving up on her playing career, but still occasionally reminisces about her time as a pro golfer. She finished 19th on the Symetra Tour money list in 2016 and was not far from earning status on the LPGA Tour. She sometimes wonders what might have been had she stuck with it, but has no regrets and is loving her new life. “I was so busy when I first stopped playing,” she says.

“I dove right into things. Within a month of me stopping golf I had a full-time job that I didn’t know much about. It took me a lot of time just to learn it. I was so busy I wasn’t really processing, hey I am not out there anymore. The first year it was weird to see the season start and see all those familiar names on the leaderboards. I still keep up with the Symetra Tour and LPGA to see how everyone is doing. I do miss playing, but I also like making a nice consistent pay cheque on a weekly basis.”