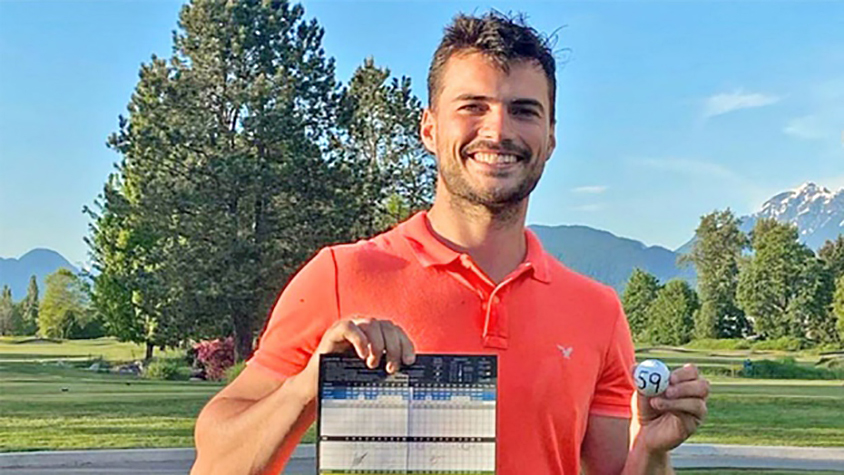 Now that he’s dried himself off and had some time to reflect on the round of his life, Michael Caan still can’t quite believe what happened.

His round of 59, which ended with a celebratory dive into the pond surrounding the 18th green at Meadow Gardens Golf Course that went viral on social media, remains a bit of a blur. Especially the closing few holes, when the 27-year-old Coquitlam pro realized he had a chance to do something special.

Caan, a regular on the Vancouver Golf Tour, drained a 35-foot putt for eagle on Meadow Gardens’ par 5 18th hole Friday to shoot his 59. And as soon as that putt dropped -- actually before it even actually dropped -- Caan started running toward the pond and jumped into the water.

“It was weird, I got home and posted it right away and my following went nuts which is cool,” Caan says. “I was like this is awesome, everybody is really liking this. . .then I woke up Saturday morning for work and my phone wouldn’t stop. There were notifications that just went on and on and on. Even now I am still getting constant notifications.

I have tripled my followers on Instagram which is great. It has been surreal, just a crazy outpouring of support which is amazing. I am hearing from people I haven’t talked to in a long time. My friend in the Philippines showed me an article they wrote there. It’s just crazy. It is awesome.”

Caan is a longtime member at Meadow Gardens, the Pitt Meadows course he learned the game on when he first took it up about 10 years ago. He was playing with three junior members and it wasn’t until early in his back nine that he realized that something magical might be in the works.

“I birdied a couple of holes early and that was fine. I made the turn at five-under which is good but nothing super amazing. I birdied 10 and then eagled 11, so I was eight-under through 11 and I kind of thought, oh, we could have something special going on here.” 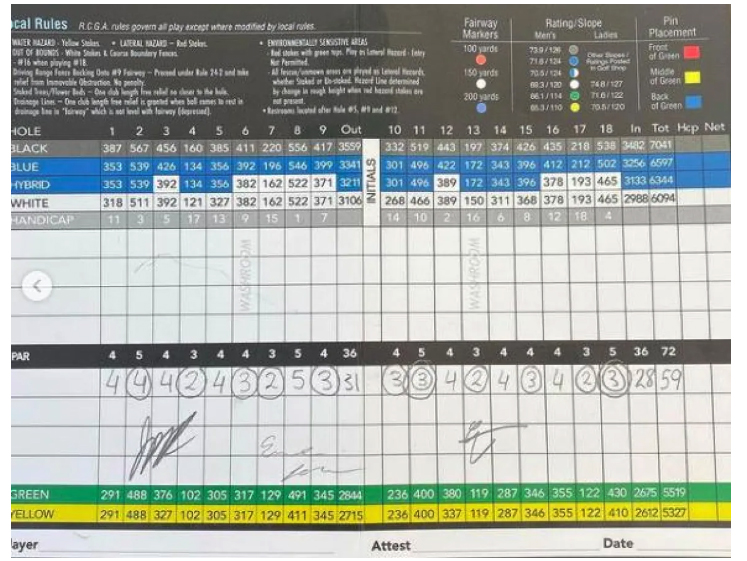 When he sunk a 10-foot putt for birdie on No. 15 to get it to 10-under, Caan realized 59 was a possibility. “As soon as I made that putt on 15 I was like oh (crap) if I finish birdie, birdie, birdie I could actually do this. I was terrified.”

Caan missed a 20-foot putt for birdie on 16, but then drained a 30-footer on 17 to go 11-under and give himself a chance. But he’d have to eagle the par 5 18th, one of Metro Vancouver’s most intimidating finishing holes. There’s water literally everywhere.

After a bit of a wait on the 18th tee, “I hit a very nervy tee shot that managed to find the fairway.” Caan had about 235 yards left -- into the wind. And of course he had to carry the water to the island green.
“I hit my 3 hybrid. All I wanted was a chance. I wanted a putt. I hit such a good shot. I had about 35 feet and after that it’s just a complete blackout.”

Caan’s previous best score was a 63, which he had done four times. He handed his phone to one of his playing partners late on the back nine to record things just in case. “It was really nice to share that special moment with them,” Caan says. “They were just as happy as I was.”

Caan is a teaching pro at Riverway Golf Course in Burnaby. He hopes all the publicity his round is receiving will be good for business. “I have already had a bunch of people message me regarding teaching,” he says. “I really enjoy teaching. Golf is kind of my life right now, so if I can make some extra money teaching, that funds my professional golf career.”