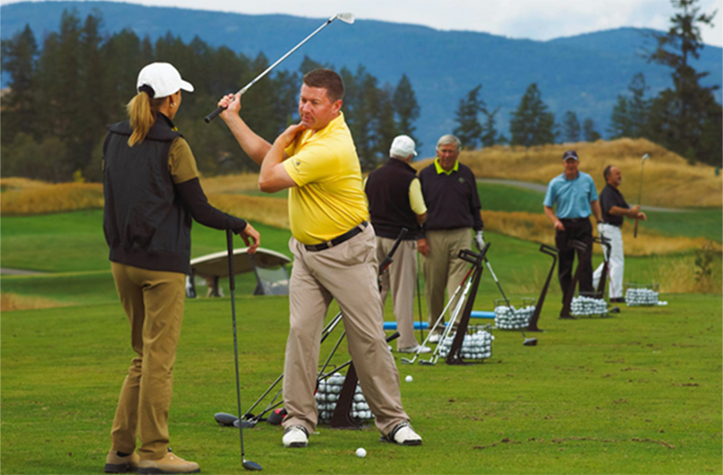 Nick Taylor and Jessica Wallace will tell you that Sean Richardson not only helped them become better golfers, but better people.

Taylor and Wallace were among many in the B.C. golf community who paid tribute to Richardson, who died April 18 after a lengthy battle with cancer at the age of 52.

Taylor and Wallace, who both worked with Richardson as junior golfers, say he had a profound impact on their lives. “My career started with Sean and it wouldn’t be where it is without him,” Taylor, a two-time PGA Tour winner, said in a post on Twitter.

“I’m so appreciative of his help in the early days and so grateful I got to see him last year. He was a light in the golf world and he will truly be missed. RIP Sean.”

Jessica Wallace and her brother Darren were both coached by Richardson. Darren became the youngest winner of the Canadian Amateur at age 15 in 2004 and went on to play collegiate golf at the University of Washington.

Jessica had an accomplished junior career and earned a golf scholarship to the University of Colorado. She later played on the Symetra Tour and now is the controller at Pitt Meadows Golf Club. “The golf world lost one of the absolute best people,” Jessica said on Twitter.

“Sean’s energy was infectious to everyone who got to spend time with him. Aside from my parents, no other person influenced the course of my life more than Sean and I’m so grateful to have had the privilege of being his student.”

“Sean was the first coach employed by British Columbia Golf,” said Chief Executive Officer Kris Jonasson. “We will honour his memory with a donation to First Tee British Columbia.”

SMITH JOINS SAGEBRUSH: Sagebrush Golf Club, which is scheduled to reopen in July after being closed for nearly seven years, has appointed Randy Smith as head professional. Smith recently left Vancouver Golf Club in Coquitlam after 19 years as head professional. Mark Strong, recently appointed general manager of Sagebrush, worked with Smith for several years at Vancouver Golf Club. “I’m looking forward to working with the Sagebrush team in getting this magnificent golf masterpiece back to the stature it deserves,” Smith said.

BC BANDITS: British Columbia golfers are making out like bandits on the Outlaw Tour in Arizona. One week after Kimberley’s Jared du Toit won an Outlaw Tour event, Vancouver’s Ryan Williams followed with a win of his own. Williams, a former Mackenzie Tour regular, won the Outlaw Tour’s Legacy Classic with a 54-hole total of 14-under par. That was one shot better than another British Columbian, Riley Wheeldon of Comox. Williams pocketed $6,000 for the win, while Wheeldon earned $3,000.

NOT SO EASY: The Big Easy turned out to be hard for Abbotsford’s Nick Taylor and Roger Sloan of Merritt. Both players missed the cut in the Zurich Classic of New Orleans, which is a two-man team event. Taylor was paired with Martin Laird of Scotland, while Sloan played with Australian Aaron Baddeley. Abbotsford’s Adam Hadwin, who did not play in New Orleans, returns for this week’s Valspar Championship in Palm Harbor, Fla. That’s where Hadwin earned his lone PGA TOUR victory in 2017. Taylor and Sloan are also in the Valspar field.

TOUGH CUT: Kimberley’s Jared du Toit and Stuart Macdonald of Vancouver can attest to just how tough it is to rise through the professional golf ranks. Du Toit and Macdonald were both five-under par through 36 holes of the Korn Ferry Tour’s Veritex Bank Championship in Arlington, Tex., and both missed the cut by one shot.

Du Toit played both of his rounds with former Dallas Cowboys quarterback and current CBS analyst Tony Romo. Not that it was any consolation, du Toit bettered Romo’s score by 16 shots, or two touchdowns and a safety. Surrey’s Adam Svensson made the cut on the number and finished tied for 53rd at 10-under par. He remains 13th on the Korn Ferry Tour points list. The Korn Ferry Tour visits Alabama this week for the Huntsville Championship. Svensson and Macdonald are both in the field.

ON HOLD: The B.C. Women’s and Men’s Mid-Amateur Championships and the B.C. Senior Women’s Championship have been postponed by British Columbia Golf due to current provincial health restrictions.
The Mid-Amateur was scheduled for May 24-27 at Gorge Vale Golf Club in Victoria, while the B.C. Senior Women’s tourney was scheduled for June 13-16 at Talking Rock Golf Course in Chase. British Columbia Golf hopes the events can be rescheduled for later this summer.

ON FORME: The PGA TOUR has announced that a newly created Forme Tour will run eight tournaments in the United States this summer for exempt PGA Tour Canada members. The move was made due to the continuing COVID-19-related closure of the U.S.-Canada border. The Forme Tour will provide the top five players at the end of the season with Korn Ferry Tour membership.

The Mackenzie Tour will hold a number of events across Canada for Canadian-based players this summer. Players will be able to earn access to the traditional 2022 Mackenzie Tour. That schedule has not yet been released but is expected to include September events in Victoria and Kelowna.

BIRDIE BINGE: Megan Osland of Kelowna won a National Women’s Golf Association event in Orlando, Fla. Osland made 10 birdies en route to a seven-under 65 in the second round of the 36-hole event. She finished the tournament at five-under to beat three players, including multiple-LPGA winner Paula Creamer, by two shots. Osland earned $1,400.