In a normal year, the Mackenzie Tour-PGA Tour Canada circuit would be just over a month away from starting its season with a three-event swing through British Columbia.

Of course, nothing is normal these days, and Mackenzie Tour executive director Scott Pritchard is scrambling to put together a schedule. Pritchard promises we’ll get an idea later this week what that might look like, but it will likely include events in both Canada and the United States.

With the Canadian border closed for the foreseeable future, the Mackenzie Tour figures to start its season with events in the United States. It hopes to play some events in Canada and current plans call for two British Columbia events in Kelowna and Victoria to be played in late September.

A Vancouver stop will not be included on this year’s schedule. “We are hoping we can conduct eight to 10 events in Canada and we are working hard to do that,” Pritchard said.

Pritchard also said this year’s schedule will likely include some U.S.-based events. More details are expected to be released later this week by the tour. It seems possible the U.S. events would be for players who have earned status through qualifying schools and others who remain exempt from the 2019 season.

Many of the Canadian events could be for Canadian players and will likely feature smaller purses, perhaps similar to the four Canada Life Series events played last summer by the Mackenzie Tour.

The GolfBC Championship will be played at Gallagher’s Canyon in Kelowna, while the DC Bank Victoria Open presented by the Times Colonist will be contested at Uplands Golf Club in Victoria. Keith Dagg, the longtime organizer of the Victoria tournament, said he’s fine with the move to a late September date.

“I think it's great,” Dagg said. “I am really glad they have moved it from the first week of June to September because there is no way we could run a golf tournament in June with all of the new (health) restrictions coming down. By September things should be better and of course the weather is awesome in Victoria in September.”

The Mackenzie Tour recently announced it was moving its final and lone Canadian qualifying school site from Crown Isle in Courtenay to The Home Course in the Tacoma, Wash., suburb of DuPont. That Q- School will now be played June 8-11.

UP AND RUNNING: The golf season in the Kootenays is shifting into high gear as more courses open for play. Cranbrook-area courses St. Eugene Mission and Wildstone both opened on Friday (April 16).
Bootleg Gap in Kimberley opened its Recreational 9 on Friday, while its championship course will open on April 30. Trickle Creek in Kimberley is scheduled to open on May 9. Eagle Ranch in Invermere was one of the first in the area to open on April 1. “That is earlier than normal,” said general manager Peter Smith.

“Last year we were May 1. This year, based on the demand that we left off with at the end of last season, we thought we’d try to see if we could be ready. And actually the weather was good and the golf course is in good condition.”

All of the courses in southeast B.C. rely heavily on play from Albertans and Smith said there has been a considerable softening of demand from Albertans early this season due to COVID travel restrictions. “We have seen more concern from our Alberta visitors about travelling,” Smith said.

“We are still feeling that 2021 will be great. We are just seeing a little hiccup at the start here because of what’s going on. If we had been a month ahead with our vaccines we might not be where we’re at. But that’s where we’re at and until we get more vaccines out there and the (COVID) numbers start to drop I think we are going to see some hesitancy or a little bit of softening.” 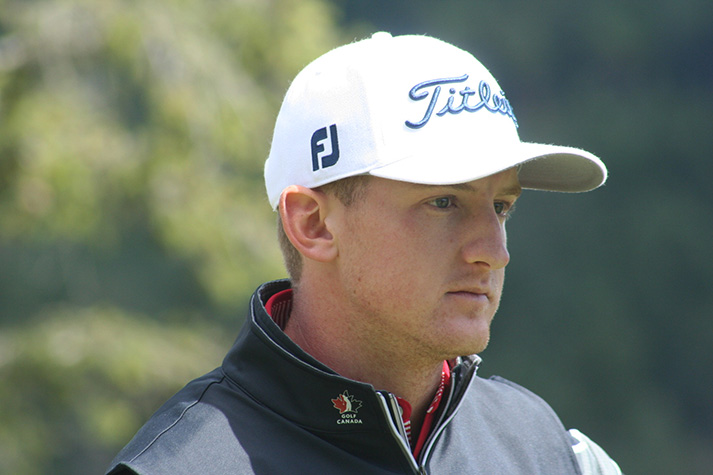 WEEKEND OFF: The Abbotsford duo of Nick Taylor and Adam Hadwin had what no professional golfer wants -- the weekend off -- at last week’s RBC Heritage tourney in Hilton Head, S.C. Both players finished 36 holes at one-over par and missed the cut by three shots.

Taylor is playing in this week’s two-man team event, the Zurich Classic in New Orleans, where he is partnered with Martin Laird of Scotland. Merritt’s Roger Sloan is paired with Australian Aaron Baddeley. Hadwin is taking this week off.

SUNDAY STRUGGLES: Surrey’s Adam Svensson began Sunday’s round at the Korn Kerry Tour’s MGM Resorts Championship at Paiute in Las Vegas just one shot out of the lead. When it was over Svensson had dropped into a tie for 22nd place after struggling to a six-over 78 that included a 42 on the back nine.

Svensson finished the event at six-under par, 10 shots behind winner Peter Uihlein of the United States. Svensson, who won for the second time on the Korn Ferry Tour earlier this season remains 13th on the tour’s points list and is in solid position to earn a PGA TOUR promotion at season’s end.

Svensson and Vancouver’s Stuart Macdonald are both in the field for this week’s Veritex Bank Championship in Arlington, Tex.

JUNIOR FUNDRAISER: The University of the Fraser Valley men’s and women’s golf teams have announced their first Cascades Junior Golf Fundraiser Tournament. The event will feature a Scramble format and be held May 15 at Cheam Mountain Golf Course in Chilliwack. Entry fee is $40 and includes green fee and a burger meal.

All proceeds of the event will be used to pay for junior golfers to enter summer camps in the Fraser Valley. Here is the registration link: https://chilliwack-golf-club.golfems2.com/event/2021-cascades-junior-golf-fundraiser-tournament