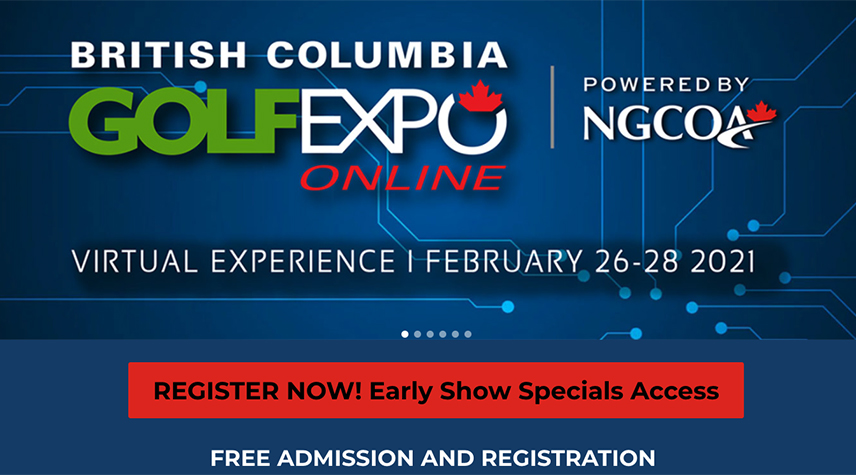 Like so many other things in our lives, this year’s British Columbia GOLFEXPO will be a little different. Actually, a lot different.

The annual golf expo, which runs Feb. 26-28, will not require a drive to its regular location, the PNE Forum building in Vancouver. In fact, it won’t require any kind of drive at all. You can take in this year’s show from your couch.

The show has gone virtual, thanks to COVID-19 restrictions. Simply visit bcgolfexpo.ca and you’re there.

“It is absolutely going to be different this year,” says Jeff Ciecko of CK Golf Solutions, which is managing this year’s show for its owner, the National Golf Course Owners Association of Canada. “It is free to consumers this year, which is new. In the past it has been a ticketed event.”

Organizers have created a virtual show floor similar to one that golf show visitors were accustomed to seeing in person in past years.

“We have lots of great exhibitors, a great contesting platform that we are using where consumers can come in and enter a bunch of contests to win golf and other prizes,” Ciecko says. “We are holding an online auction to raise funds for the NGCOA Canada’s junior golf initiatives like Take a Kid to the Course and other things like that. Then there is a golf deals section where some of the exhibitors have chosen to put up various golf deals and that is all being handled through the expo website. There’s tons of reasons to come and visit us.”

“So they would get early access on the 25th with a pass code which we will email out and then the full Expo is available for free with no pass code from the 26th to the 28th,” Ciecko says. “The advantage of signing up early is that on the 25th you will have access to the deals. Some of the courses have put limits on them. They only want to sell 25 or 30 of their passes or whatever they are doing so we are encouraging everybody to sign up early,”

“At the end of the day it is going to be a good experience for the user,” Ciecko says of this year’s virtual expo. “We know people are spending more and more time online during the pandemic so we think this is an opportunity for people who are couch-surfing on their iPads and iPhones, computers or whatever it might be, to go in, take a look around and see what golf in British Columbia is looking like in 2021.

“This gives golfers an opportunity to take a look at what is available in our province because we believe you are going to be traveling within your province this summer.”

The GOLFEXPO will also have a YouTube channel featuringseveral travel videos from various golf regions in the province. Online instruction and tips from PGA of BC members will also be available.

“In addition to the YouTube channel we have created a Spotify playlist so consumers can turn on some music while they search through the GOLFEXPO,” Ciecko says.

TOP-20 FOR TAYLOR: Nick Taylor closed with a two-under 69 on Sunday to record a top-20 finish at the Genesis Invitational at Riviera Country Club in Pacific Palisades, Calif. Taylor finished the event at three-under par and tied for 20th. That was nine shots behind winner Max Homa, who beat Tony Finau in a playoff. It was Taylor’s best finish in seven starts at Riviera. He earned $101,835.

Fellow Abbotsford product Adam Hadwin also played well on a demanding Riviera layout. After making the cut on the number, Hadwin closed with two weekend rounds of 70 to tie for 26th at two-under par. Hadwin, who has not missed the cut in seven starts at Riviera, made $67,890.

Hadwin and Taylor are both taking this week off. Merritt’s Roger Sloan is playing in this week’s Puerto Rico Open, which is being held opposite a World Golf Championships event, the Workday Championship at The Concession, in Bradenton, Fla.

Former B.C. resident Albin Choi, who got into the tournament as a Monday qualifier, tied for 14th at eight-under par. That guarantees Choi at start in the next Korn Ferry Tour event, the Chitimacha Louisiana Open which goes March 18-21.

Taylor Pendrith of Richmond Hill, Ont., tied for 23rd at seven-under. Pendrith, who is currently second on the Korn Ferry Tour points list, has a spot in this week’s Puerto Rico Open.

SERIES SCUTTLED: The B.C. Rivalry Series, which was set to conclude this spring following a successful fall series of events, has been sidelined due to COVID-19 restrictions. UBC, University of the Fraser Valley and UBC-Okanagan competed in eight one-day events that were held in the fall. Langara College also participated in some events.

The hope was to have the Rivalry Series continue this month, but the latest COVID-19 restrictions imposed by Dr. Bonnie Henry has prevented that.

UBC golf coach Chris Macdonald created the Rivalry Series when the regular collegiate golf season was cancelled due to COVID-19.

CHIP SHOTS: The PGA Tour Canada-Mackenzie Tour circuit is holding its first of seven spring qualifying schools this week in Weston, Fla. Crown Isle Golf Resort in Courtenay is scheduled to hold the final Q-School in late May. . .Jesse Crowe, who did a wonderful job the past seven years as head professional at Salmon Arm Golf Course, is now director of golf operations and head professional at the Overlander Golf & Events Centre (formerly Royal York Golf club) in Armstrong.