Fond Memories As Taylor Prepares To Defend At Pebble Beach 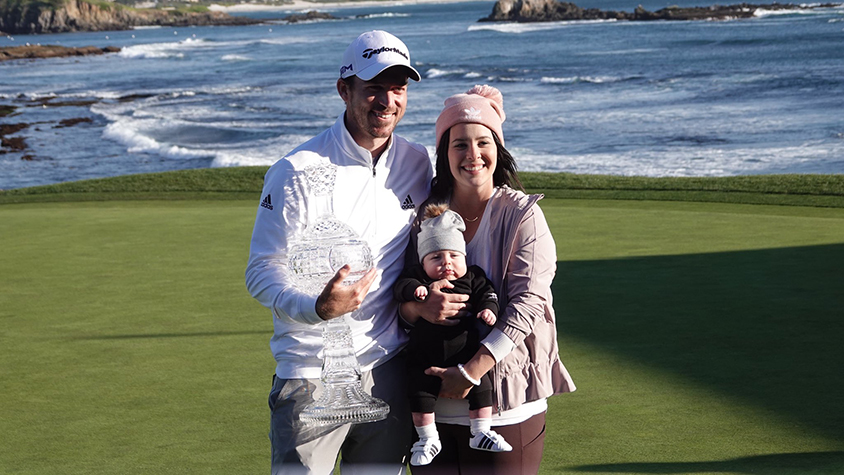 The memories figure to last a lifetime, so one year after the biggest win of his professional career Nick Taylor has no difficulty recalling some of the most special moments of that magical week on the Monterey Peninsula.

One of the best was having his wife Andie and their young son Charlie waiting for him behind the 18th green at Pebble Beach Golf Links after he won the AT&T Pebble Beach Pro-Am.

“There’s a picture of me, Andie and Charlie and he’s looking like he’s really unimpressed being there, so that is awesome,” Taylor says with a laugh.“That is a great memory.”

But there are so many others.

“Pebble Beach is such a memorable place,” Taylor says. “It’s neat to look back at that final round when I chipped in a couple of times, and then walking up 18 knowing that I was going to win. I am definitely looking forward to getting back there and playing.” Taylor will defend what was his second PGA TOUR win this week and things will be a bit different.

For starters, there will be no pro-am at this year’s tourney. Taylor was paired with Golf Digest editor Jerry Tarde when he won last year. With no pro-am, Monterey Peninsula Country Club has been dropped from the rotation this year. Taylor opened the tournament with an eight-under 63 at Monterey Peninsula.

This year’s event will see players play Pebble Beach and Spyglass Hill the first two rounds, with the final two rounds played at Pebble. “I have always played well at Monterey Peninsula,” Taylor says. “I’ll miss it. It’s a gorgeous course, right on the ocean. But Pebble three times isn’t so bad, either.”

Taylor finished last year’s event at 19-under par and won by four shots after an epic battle in Sunday’s final round with Phil Mickelson. He has replayed that final round in his mind many times. A few key shots stick out. He went birdie, birdie, eagle on holes four through six, holing out a bunker shot for this three on the par 5 6th hole. “That bunker shot was obviously very memorable,” Taylor says.

“The next hole (No. 7) is when I remember the wind picking up. That was the point where it got really, really challenging. I hit it in the front bunker and I had a 12- or 15-footer and made that for par. That was a pivotal moment.”

Taylor stumbled slightly early on the back nine, bogeying the 11th and 12th holes and then making a double on No. 14. But he chipped in for birdie on 15 and made another birdie on the par 3 17th to take firm control of the tournament.

“The 18th hole, I remember vividly,” Taylor says. “My caddie and I had talked about it the day before. I said if we get to the 18th hole and I don’t need to hit driver what would I hit? He said a three-iron to the right. So I had that in my mind when I got to that tee and had a four-shot lead.

"I have never hit that club off that tee, it’s always been either a driver or a three-wood. So I didn’t know what to expect. I looked where I wanted to hit it and it was so wide. I remember thinking 'why don’t I do this all the time'. It was a relief for the finish to be relatively stress-free.

“Walking up to the green and seeing family and friends behind the green is stuff I remember very well. There was a lot of great stuff and that’s why I think it was pretty special because there were so many moments in that final round that were very memorable.”