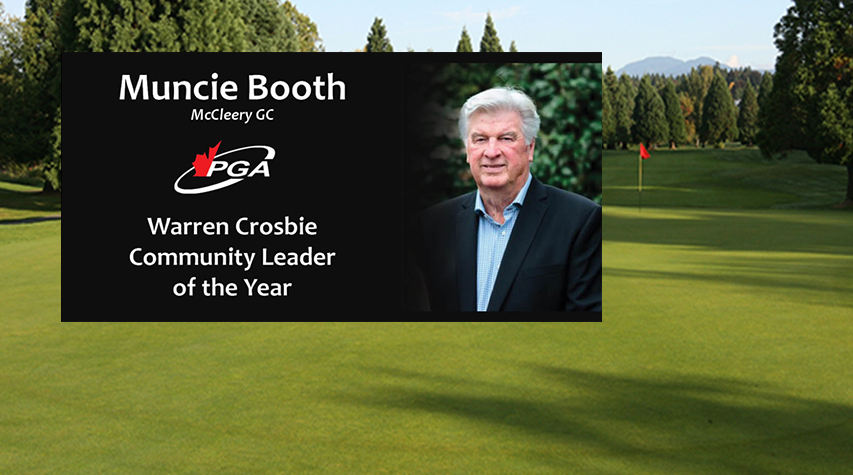 For the past 21 years, Muncie Booth has run golf camps for inner-city children at McCleery Golf Course in Vancouver. The kids are given some golf instruction, run through a series of fun drills and offered a scrumptious brunch inside McCleery’s clubhouse.

They don’t pay a dime to attend the camps, thanks to the efforts of Booth, the longtime head professional at McCleery.

For that work and so much else he has done in his 40 years as a member of the PGA of Canada, Booth was last week named the inaugural winner of the association’s Warren Crosbie Community Leader of the Year Award.

“It was a quite surprise,” Booth says. “I wasn’t expecting it and it was great news.” Booth started the program in 1999, one year after arriving at McCleery. In his first year there, the course was running camps for kids who lived in the McCleery catchment area.

“So that was catering to the west side of Vancouver and obviously very wealthy families,” Booth says. “So we really filled up the camps with all these kids coming from wealthy backgrounds.”

That got Booth to thinking about what he could do to help children from poorer neighbourhoods. He contacted counsellors at three community centres in the Downtown Eastside area and they helped him set up camps for kids from that part of the city.

“They knew of the kids who were the poorest and they arranged for them to come to McCleery,” Booth says. “That's kind of how it got started 21 years ago and it has been going strong ever since. This year (2020) was the first year we haven’t had it because of COVID, but every other year we’ve had it.”

Booth notes that he has received sponsorship assistance from some longtime friends both inside and outside of the golf community to help keep the inner-city camps running. About 1,100 kids have participated in the McCleery camps, which is more impressive than any number you might find on a golf scorecard.

Booth hopes the camps will resume this summer. “I hope so, but who knows,” he says. “But we will definitely get it going again because I have saved up enough money in the fund to pay for it at least two more years. Everything seems to be heading in the right direction and I have the great cooperation of my (golf shop) staff. They play an integral part in making sure it runs properly once the kids arrive and until they leave.”

Phil Jonas, a former instructor at McCleery who helped out at many of the camps, was delighted to see the PGA of Canada recognize Booth. “Muncie is so deserving of this award,” says Jonas, a member of the B.C. Golf Hall of Fame.

“The inner-city camps are great. I loved teaching at them. One of the things I remember about them is when you asked the kids what they most remembered about the camps, many of them said it was the brunch because some of them hadn’t eaten food like that before.”