Getting to know: Darren Douma 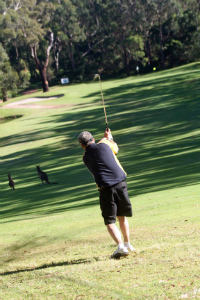 Playing golf takes patience. It takes composure. It takes strength. Determination. Resilience. One thing that Darren Douma and blind golfers all over the world are proving it doesn’t take - is sight.

Douma has been golfing his whole life and even worked in the golf industry for many years, but in 2005 he was diagnosed with Stargardt’s disease. Changing not only his relationship with golf, but also his life.

Stargardt’s disease is the most common form of inherited juvenile macular degeneration. The disease causes progressive vision loss that cannot be corrected with glasses or even surgery and there is also no treatment to slow or prevent vision loss.

Having lost much of his vision by 2009, Douma had all but given up on golf, struggling to locate his ball and feeling like a burden to fellow competitors. It took witnessing an incredible shot by Phil Mickelson during the 2010 Masters to pull him out of his rut.

“It was then that I realized I shouldn’t give up. We have obstacles in our way and obviously vision loss was in my way, but I shouldn’t have let it slow me down or stop me,” explained Douma.

And since then, it hasn’t.

When he’s not playing on his home course, Douma plays with the aid of a sight coach who helps make sure he is properly aligned for his shot. Since he still has light perception, the sight coach gives Douma a target in the distance, such as a tall tree, to help him aim and tells him the distance he’ll need to hit. The rest is up to him and his swing.

“I’m comfortable with my course, I don’t really play too many others here in BC, I just play my own course and I’ve grown up on this course my entire life so I’m comfortable in my environment here, and I can get through it,” he said during a phone interview with British Columbia Golf from his home in Creston.

“But going to Australia or any other course for that matter, it was a lot harder not knowing the course and you have a lot more emphasis on your sight coach.”

Douma just recently returned from the World Blind Golf Championships at the Nelson Bay Golf Club in Port Stephens, Australia. He placed second over all and second in the B3 category. In general terms, golfers in the B3 category have about 10% of their vision. It was only the second Blind Golf event that he had competed in.

“Having been at the Canadian Open and then at this event and hanging around with the Canadian contingent that are there, it is really like a Blind Golf Family,” Douma said.

“It’s tightly knit and they’re all in it together. It was a great experience hanging out with them and being a part of it,” Douma said.

The next event Douma is looking forward to competing in is the Canadian Open, August 5 – 7 in Truro, Nova Scotia.

Douma is optimistic about getting others involved in blind golf and hopes to inspire more visually impaired youth to become active in golf.

“Golf is out there and it’s a life-long outlet for anybody to participate in and no matter what abilities you have, or disabilities you’re facing, you can go out and do it,” Douma said.

“You just have to have the desire to do so.”

To learn more about his story visit Darren Douma's website. Interested to see Douma in action working with his sight coach? Check out this video by ShawTV Kootenays.