Behind The Scenes At The AT&T Pebble Beach Pro Am 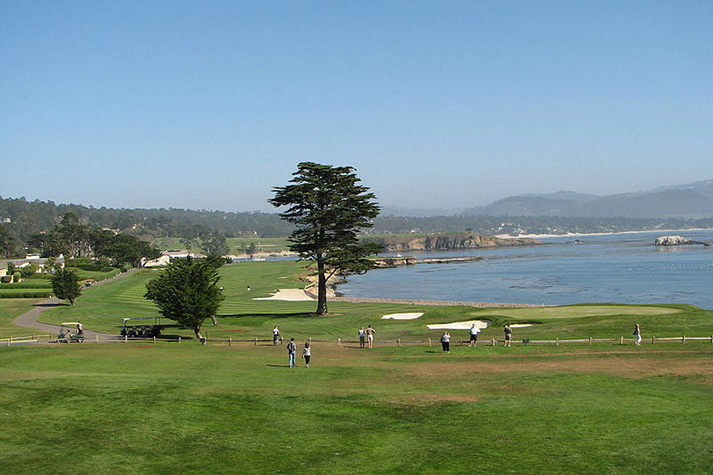 Abbotsford’s Nick Taylor is now forever a part of Pebble Beach history with his 2020 win at the AT&T Pebble Beach Pro-Am. Not only will he will be invited back to play in next year’s Chevron Putting Challenge on the Tuesday prior to the tournament, he will probably join the Superstar groups starting next year, with famous partners if he isn’t paired once again with Golf Digest’s Jerry Tarde.

Tarde and Taylor finished T2 in the amateur side of the tournament, but Taylor is probably OK with that because he has the big trophy that really counts.

Now that the tournament is over, let’s empty the notebook of what you can only see and experience on site at Pebble Beach.

The AT&T Pebble Beach Pro-Am shows up fantastically on television, with waves gently lapping up on shore, dolphins and/or whales breeching in the distance, and sunlight as far as the eye can see. In reality, Pebble Beach is a hard tournament to watch, cover, traverse, and ultimately, enjoy.

Every journalist and photographer’s nightmare is getting stranded out by the 9th green and 10th tee box at Monterey Peninsula’s Shore Course. There is no shuttle stop there – the drop off is at the 10th green, where the main spectator entrance to the tournament is located – and even if you decide to do just nine holes and get picked up at the clubhouse after the 18th hole, you run into a chaotic drop-off zone because MPCC often holds a prestigious local tournament on its other 18 holes, the Dunes Course, during Pebble Beach week.

On Friday, when I ventured out to MPCC 10 to see everybody from Peyton and Eli Manning to Macklemore and ultimately, the signature group of Dustin Johnson, Wayne Gretzky, Jordan Spieth and Jake Owen, I hit the shuttle jackpot. Not only was my ride out there seamless, my ride back could not have been more perfect.

After walking up the big hill on 18, and then all through the driving range to the parking lot, literally the first van I see has the yellow Media shuttle sticker on it and Jim was my savior, getting me back to Pebble Beach just before lunch on one of the best days in the tournament every year.

That’s because it is Seafood Friday, where they bring the New England clam chowder directly from the Lodge at Pebble Beach and the salmon tastes like it may have been swimming just hours earlier.

By the time I’m done, you could probably cut me open and you'd get white chowder coursing out of my veins.

Also of note, after covering the DJ/Wayne/Jordan/Jake group for five years, I have become friendly with the volunteer security team that is assigned to this group each year. Frank is the captain and he marshalls his troops expertly so that nothing crazy happens. Frank is a lovable big bear of a guy who you don’t want to cross and he de-escalates potentially volatile situations with humour and a kind smile. Plus, I spend most of the time reminding him of what lunch I will be having when I leave the group for the media centre.

Also deserving kudos is Joe, who organizes the media shuttle service. Joe leads the team that drives us in from our parking spots, takes us out to almost any spot on any of the three courses in the rotation, and he does it with a smile and never with the word “No.”

Joe told me that he will be taking his wife on a vacation to Vancouver in May and after asking for recommendations on where to go, I gave him a list which included Oppenheimer Park in Vancouver, the 104th Street strip in Whalley and the Kingsway/Metrotown area where thousands of people have been demovicted in the last five years. (Just kidding, I gave him a list of fantastic spots from Stanley Park to Lonsdale Quay to Granville Island to the Grouse Grind, which should keep him occupied for the two-plus days he is in town).

On a completely unrelated note, the scoring statistics for David Duval’s 32 holes re-appeared on the PGATour.com website and here are the gruesome details for the former World No. 1 who officially withdrew because of an elbow injury.

Add it all up and you get 2 birdies, 11 pars, 13 bogeys, 5 double bogeys and 1 triple bogey. Or in other words, a scorecard someone like me would post. And I can’t finish off this yearly three-week odyssey without mentioning my good friend Tom Tomczak of PGA Tour Productions.

Tom is pretty much the longest serving member of his increasing younger crew of videographers who fill up the PGATour.com website, Instagram, Facebook, Twitter and everywhere else in the wired universe. He does most of the pre-tournament work, from press conferences to interesting features that populate the many places the PGA Tour is spreading its wings to.

I’ve known Tom since 2008 and as we look around media workrooms, we see fewer and fewer oldtimers and entire crews of young whippersnappers. Tom and I joke we both don’t know how much longer we will be doing this, but it is always nice to see Tom’s smiling face. As an aside, one of the people Tom helped train is one of the brightest stars in the CBS universe. Amanda Balionis once worked alongside Tom and we both knew her when she was toiling and learning the ropes at PGA Tour Productions.

On Tuesday and Wednesday, we spent several hours each day walking the iconic holes at Pebble Beach, from 3 to 11 and then 16 to 18. Along the way, we met a lot of old friends, from Ben Martin and Chesson Hadley for Tom to Mike Darby for me.

As I finish off this three weeks of PGA Tour coverage, here’s to all the great friends I saw again in San Diego, Phoenix and Pebble Beach. Let’s do it all again in 49 weeks time.