Vernon Steps Out Of The Golfing Shadows

VERNON -- Myles Johnson is proud to call Vernon home. It’s where Johnson was born and raised, where he learned to golf and where he has spent more than 20 years in the golf industry. So it’s probably safe to say no one was happier than Johnson, the head professional of Spallumcheen Golf & Country Club, when Vernon-area golf courses recently formed a consortium to market themselves as a golf destination.

“I love it,” Johnson says. “I think for too long we have been trying to do things on our own and we end up being lost in the Kelowna-Okanagan shuffle. I think by doing things together we are going to let people know what we have and give ourselves better exposure.”

What Vernon has is not only some great golf, but also a terrific variety in its product. Spallumcheen and Vernon Golf & Country Club are both classic parkland-style courses that golf purists love. The Rise, which opened 10 years ago, sits perched high above Okanagan Lake and playing it is a little like riding a roller-coaster with plenty of ups and downs.

And then there is Predator Ridge, the magnificent 36-hole resort that in many ways is in a class of its own. Predator often gets lumped in with its Kelowna neighbours, but it’s address reads Vernon. And Predator Ridge boss Brad Pelletier, whose leadership and vision is one of the secrets to the resort’s success, does not mind celebrating that fact.

Pelletier was happy to get on board with Tourism Vernon’s efforts to market the city’s golf course properties. “I love the fact that Vernon remains committed to promoting the game of golf,” Pelletier says.

“Others seem to have abandoned golf when it needs the promotion the most and I credit Vernon for that as well. Any time we are driving traffic up here to experience not only the golf but the great wineries that are emerging in the north Okanagan, that benefits everyone.”

Tourism Vernon recently hosted a group of Canadian and American golf writers to experience the city’s courses. We stayed at the Predator Ridge Lodge, which boasts superb studio, one-bedroom and two-bedroom suites overlooking the Predator Course. The Lodge will be among several Vernon-area properties offering stay-and-play packages to city courses. 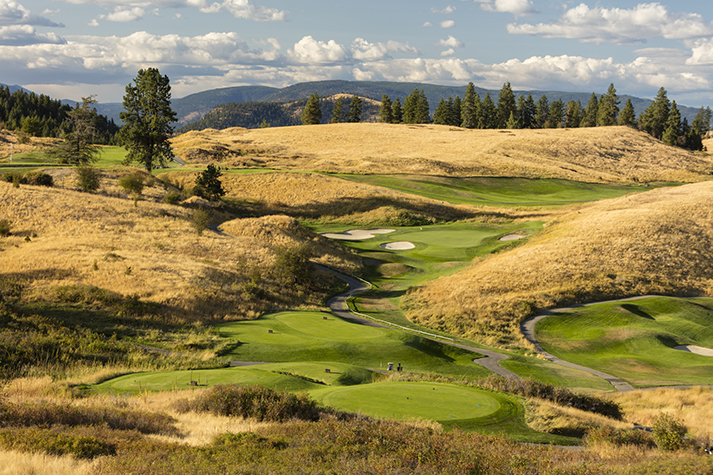 When it comes to Vernon golf, Predator Ridge is unquestionably the star of the show. It features the original Predator Course, designed by Les Furber, as well as Doug Carrick’s magnificent Ridge Course. The fact they are two very different courses is one of the many strengths of Predator Ridge.

The dramatic site of the Predator Course, which opened in 1991, is what you see as you drive into Predator Ridge on Commonage Road above the resort. It winds its way through grasslands and rolling hills and features large undulating greens.

The Predator Course has played host to two Skins Games featuring the likes of Phil Mickelson, Fred Couples, Greg Norman, Sergio Garcia and Mike Weir. Garcia was so enamored with Predator Ridge that he purchased two cottages located on the course when he played there in 2000.

The highly acclaimed Ridge Course made its debut in 2010 and is more of a mountain golf type of experience. There is dramatic elevation change and Carrick has done a masterful job of keeping the course very playable.

Some of the holes wind their way through granite outcroppings, but Carrick has shaped the holes in a way that more often than not bounces balls back into play. The Ridge Course offers some stunning views of Okanagan Lake, most notably from the elevated tee on the par 3 fifth hole.

Predator Ridge also boasts a huge grass-tee driving range and practice facility. The resort recently completed a $3.5-million “refresh” project that saw four holes -- No.s 3, 4 and 9 on the Predator Course and No. 1 on the Ridge Course -- reworked to make them more playable. That project was led by Carrick with input from Furber. 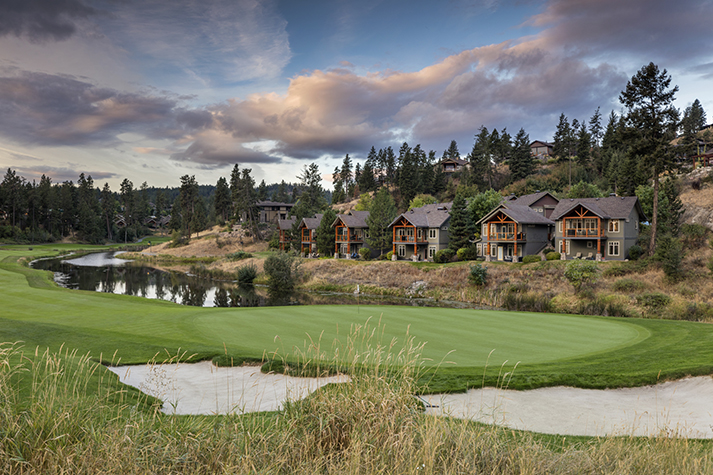 Predator Ridge Now Includes Some 700 Homes On The Property

But Predator Ridge is about much more than golf. Its nearly 1,200 acres now include more than 700 homes. The resort features more than 35 kilometres of multi-use trails and 12.5 kilometres of bike-specific trails. Other amenities include a fitness centre, swimming pools, five tennis courts and two pickleball courts -- some of them covered for winter use -- and three yoga platforms.

Pelletier says he and his staff are always seeking to add to the Predator experience. “We are blessed with a great property,” Pelletier says. “And the two courses are so different. But I think more than anything else, one of the real keys to our success is that we respect tradition but embrace change.

“We are always doing fun things, trying things, like playing golf with your dog. It’s great to try those things. Not everything works but you know what, we are out there to create great experiences for people. Every single day we are pumping out the experiences we can offer.”

Predator Ridge may be the star of Vernon’s golfing show, but there is a strong supporting cast.

The Rise is one of only two Fred Couples signature designs in Canada (Couples’ design partner Gene Bates did much of the heavy lifting). The course weathered some difficulties in its early years but found stable ownership in 2014 when it was purchased by local owners, Rencor Developments.

The course features some serious elevation change, most notably on the par 4 17th hole, which tumbles nearly 100 feet from tee to green with Okanagan Lake serving as a backdrop. No. 16 is one of 12 holes at The Rise offering views of Okanagan Lake. The Rise may have been designed by Couples -- a guy nicknamed Boom Boom -- but that doesn’t mean you pound your driver on every tee box. You must think your way around the course, especially on its tough five-hole opening stretch. 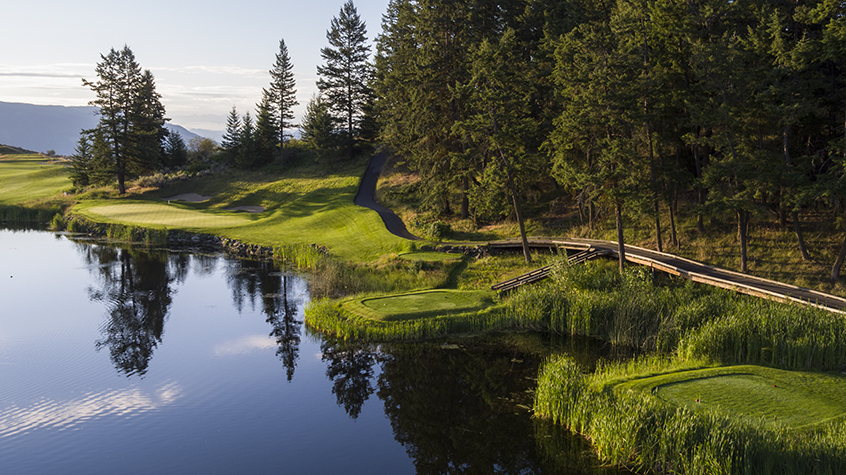 “What we tell the better players and some of the long hitters is keep the driver in the bag on a lot of holes,” says Chad Scott, director of golf at The Rise. “You just can’t get up there and grip it and rip it. It is not one of those courses where you can just mindlessly hit driver on every tee. You have to think about your tee shots and maybe peel it back a little bit, hit hybrid, hit 3-wood or even an iron. Just keep it in play.”

Players receive a rather comprehensive tip sheet before their rounds to help them navigate their way around the course. They are also encouraged to have some fun. Scott says players are welcome to play in T-shirts and flip-flops if they so desire and the power carts at The Rise are equipped with built-in Bluetooth speakers.

“We just want you to kick back, relax and have a good time,” says Scott, who is delighted by Tourism Vernon’s initiative to market the city’s courses. “I think a lot of times Vernon gets overlooked,” Scott says. “Predator sometimes gets more associated with Kelowna because it sits on that side of town. But there is a ton of good golf here.”

The grand-daddy of Vernon golf is Vernon Golf & Country Club, which is the second-oldest golf course in the Okanagan (Kelowna Golf Club is the oldest). Founded in 1913, Vernon is located just a short distance from downtown. The course features a rather unique entrance. As you drive into the course, you actually drive onto it as you must cross the 16th fairway to get to the parking lot and clubhouse area. 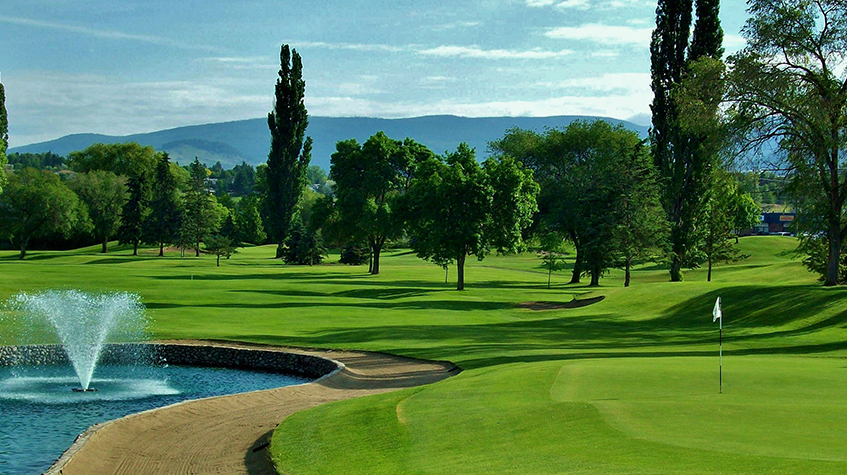 The course, which is walkable, winds along fairways lined with Lombardy poplars and huge weeping willows. Stray off the fairway and you will have a decision to make. “You will be able to recover from them, but you are going to have one of two options: over or under, and a lot of the trees are too big to go over,” says head professional Brooks Jones." Even if you avoid having to deal with the trees at Vernon, the real challenge awaits on its greens. They have plenty of slope and we can offer five words of advice: keep it below the hole.

The course is split by a secondary CN Rail line that sees about one train a day. Five holes -- called the Inside Five by the locals -- are on the clubhouse side, with the remaining 13 on the other side of the tracks. Spallumcheen, located on the north side of town on Highway 97, is another old-style classic layout. It features an 18-hole course and a nine-hole executive layout.

Its main course is a delight to play and includes a number of doglegs. Like Vernon, its greens are a challenge. They have lots of slope and there are some pin positions from which two-putting can be quite a feat. Spallumcheen has an especially strong finishing stretch, highlighted by the short 131-yard par 3 17th hole where players hit to a green fronted by a large pond, and the 567-yard par 5 18th hole, where water protects the left side of the green.

Spallumcheen and Vernon both have large memberships, but welcome public play. Johnson, who has been at Spallumcheen since starting in 1998 as a bag boy, is excited about how the new Vernon golf consortium will benefit his course. He is also thankful to have Predator Ridge on board. “We are not so naive to think that us at Spallumcheen and Vernon are not maybe piggy-backing the Predator Ridge thing a little bit,” Johnson says.

“But that’s great. I love it, I think everyone should see everything Vernon has to offer. We get people who are staying at Predator who call us up and are up there for a couple of weeks and are just looking for something different. That’s great. That is only good for us.

“Some people want to come out and walk the course. Some people like a shorter course that is maybe a little bit simpler, more friendly, where you can maybe spray a ball and find it. Everything that is offered in Vernon is unique in terms of golf. This consortium that we have created really reflects that. This isn’t a ‘come play Spall, don’t go to to Vernon Golf Club, don’t go to The Rise.’ I want everyone to be busy. I think we offer such a good product that I think everyone should be busy. There is enough product to go around for everyone.”