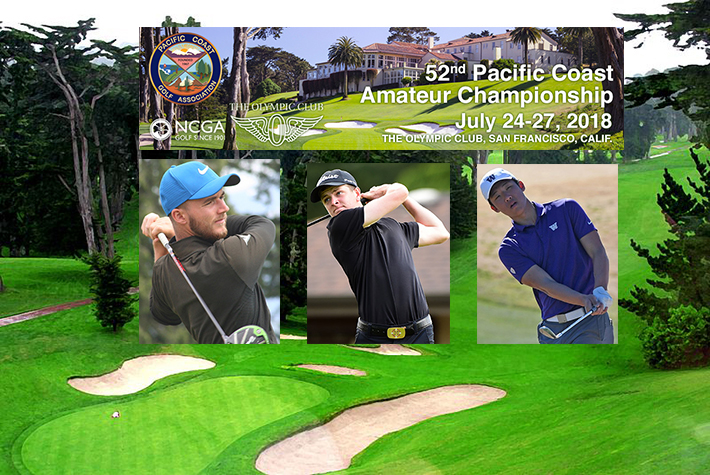 Reprsenting BC This Week At The 52nd Pacific Coast Amateur In San Francisco Are From L-R: Lawren Rowe, Nolan Thoroughgood And Henry Lee - File Images

Held on an annual basis since 1967, with roots dating back to 1901, the Pacific Coast Amateur Championship boasts a rich history of showcasing some of the most talented golfers in the United States and Canada.

Past champions of the Pacific Coast Amateur who have gone on to successful professional careers include PGA TOUR winners Billy Mayfair (1987, 1988), Jason Gore (1997) and Ben Crane (1998) as well as Web.com Tour winners and brothers Michael Putnam (2004) and Andrew Putnam (2010).

Abbotsford, BC's James Lepp is the lone British Columbian to take the individual honours, helping BC also to its only Morse Cup win to date when the event took place at West Vancouver's Capilano Golf & Country Club in 2003.

Each Member Association that belongs to the Pacific Coast Golf Association designates three players as its Morse Cup team. The best two of three scores each day during the first two days of the 72-hole championship count for the team score. The Morse Cup team trophy was donated by Samuel F. B. Morse, founder and developer of Pebble Beach Company and Pebble Beach Golf Links.

Included in the field are 3 British Columbians, Nolan Thoroughgood and Lawren Rowe of Victoria and Coquitlam's Henry Lee. The three will also make up Team British Columbia in the Morse Cup Team Competiton.

Originally Richmond's Chris Crisologo, fresh off his BC Amateur win at Rivershore Golf Links in Kamloops two weeks ago, was to be a member of the BC Team but he received an exemption into the RBC Canadian Open at Glen Abbey in Ontario this week.

For more information on the championship, visit www.pacificcoastamateur.com. Spectators and media are welcome to attend with entrance being free of charge.

For more information on past champions and sites, please click here.