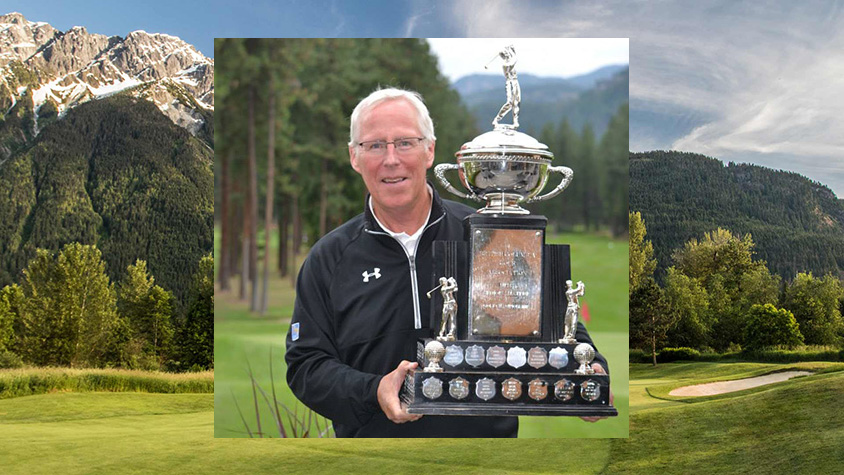 Doug Roxburgh is looking for another senior moment. Fresh off his 52nd straight B.C. Amateur Championship appearance, where he made the cut for the 50th time, Roxburgh this week defends his B.C. Senior Men’s Championship title at Big Sky Golf Club in Pemberton. A huge field of 168 players will play in the 54-hole event that begins Tuesday.

“It is going to be a fun week,” Roxburgh said. “I just like playing competitions. Big Sky is a great course, you have to hit every club in the bag and it will be a good challenge.”

“It is just a really good design,” Roxburgh said of Big Sky. “It’s a good routing with some majestic views. You tee off on the first hole and you are looking right at Mount Currie. It’s a good course.” The 66-year-old Roxburgh finished tied for 27th at last week’s B.C. Amateur Championship at Rivershore Golf Links in Kamloops, where he fired rounds of 73, 74, 75 and 72.

Wheeldon birdied the 18th hole to move to 21-under par and into a tie for the lead with Ben Griffin of Chapel Hill, N.C.. But Griffin, who was playing behind Wheeldon, also birdied 18 to finish at 22-under. Wheeldon earned $21,600 and moved to ninth from 44th on the Mackenzie Tour money list.

Two other British Columbians finished inside the top 20 in Thunder Bay. Jared du Toit of Kimberley tied for 15th place at 15-under par, while Ryan Williams of Vancouver tied for 20th at 14-under. Jake Duvall, the 2017 B.C. Amateur champion from Victoria, tied for 38th at 10-under, while 2011 B.C. Amateur champion Dave Rose of West Vancouver was 64th at one-under.

GOOD ON YU:  Vancouver’s Trevor Yu made a nice run at the PNGA Men’s Amateur Championship at the Home Course in DuPont, Wash. Yu, who is heading into his senior year at Oregon State University, made it all the way to the 36-hole championship match, where he was defeated 2-up by Mitchell Baldridge of Edgewood, Wash.

HEADING SOUTH: Next up for new B.C. Amateur Championship winner Chris Crisologo is the 52nd annual Pacific Coast Amateur at the Olympic Club in San Francisco. Crisologo and Victoria residents Nolan Thoroughgood and Lawren Rowe will compete for British Columbia in the Morse Cup team competition that is part of the Pacific Coast Amateur.

The tournament runs July 24-27. Abbotsford’s James Lepp is the only British Columbian to have won the event. Lepp captured the title when the tournament was held at Capilano Golf & Country  Club in West Vancouver in 2003.

NAILED IT:  James Presnail and Mark Kitts of Shadow Ridge Golf Club won the PGA of B.C. Pro-Assistant Championship at Black Mountain Golf Club in Kelowna. Kitts sunk a 15-foot putt for birdie on the first playoff hole to beat the team of Matt Palsenbarg and John Shin from the Northview Golf Academy in Surrey.

Both teams had finished the 36-hole event at 21-under par. Presnail and Kitts earned $2,500 for the win.

JUNIOR ACHIEVEMENT: New B.C. Junior Boys champion Ilirian Zalli of Vancouver is competing at this week’s 71st U.S. Junior Amateur Championship at Baltusrol Golf Club in Springfield, N.J. The tournament begins with two rounds of stroke play. Competitors will play a round on each of Baltusrol’s Upper and Lower courses. The top 64 players will advance to match play on the Upper Course.

The 16-year-old Zalli, who won the recent B.C. Junior Boys Championship held at Kamloops Golf & Country Club by four shots, is one of five Canadians in the 156-player field.

SEASON’S BEST:  West Vancouver’s Seann Harlingten had his best finish of the season on the Web.com Tour, tying for 24th place at the Utah Championship. Harlingten closed with a five-under 66 to finish at 15-under par. Merritt’s Roger Sloan tied for 49th at 11-under.

ACED BY SON: My former Vancouver Sun colleague and good friend Iain MacIntyre is something of a golf nut. MacIntyre, who now writes for Sportsnet, figures he has logged more than 2,000 rounds of golf and has never had a hole-in-one. This past Thursday, MacIntyre took his 16-year-old son Tom, who had never played a full round of golf, to Loomis Trail Golf Course near Blaine, Wash. You know where this is going, right?

Yes, Tom aced the fifth hole from 118 yards over water to a tight front pin. “He now leads me 1-0,” MacIntyre tweeted.