Richmond's Chris Crisologo Hit All 18 Greens In Regulation En Route To A 7-under 65 And The 3rd Round Lead In The B.C. Amateur At Rivershore Golf Links - BC Golf File Image/ Credit Jurgen Kaminski (JKam Photos)

KAMLOOPS -- Chris Crisologo thinks he is finally finding his form and that could be bad news for the rest of the field at the B.C. Amateur Championship.

Crisologo, whose play was not up to his high standards during a recent four-week trip to Europe with Canada’s National Amateur Team, went on a back-nine birdie binge in Thursday’s third round of the B.C. Amateur at Rivershore Golf Links.

A back nine 30 that included four birdies and an eagle on the 18th hole propelled Crisologo to a seven-under 65 that has him at the top of the leaderboard at nine-under par.

“It has been a bit of a grind the last couple of months,” Crisologo said. “I just want to find more form and enjoy the game a little more.”

That European adventure was fun, but the 22-year-old Richmond resident was disappointed with his results. He missed the cut in the two big events he played overseas -- the British Amateur in Aberdeen, Scotland, and the European Amateur Championship in the Netherlands.

Crisologo has only been home for a week or so from a trip that also included another tournament in St. Andrews, Scotland and some practice rounds in Ireland in preparation for the World Amateur Championships later this year. “It was a pretty hectic travel schedule and if you couple that with poor play, it's never too enjoyable,” Crisologo said. “I felt like I played pretty well (in Europe). The scores just didn’t really reflect it. I guess that's just how the game goes.”

Thursday’s round was a sign of progress and Crisologo, who recently finished a standout collegiate career at Simon Fraser University, hopes to see it continue in Friday’s final round of the 116th playing of the B.C. Amateur. It is a tournament Crisologo desperately wants to win. He finished fourth at last year’s B.C. Amateur at Morgan Creek Golf Course in Surrey. “Just to play in your home province is special,” he said. “I don’t get that opportunity very often any more.” 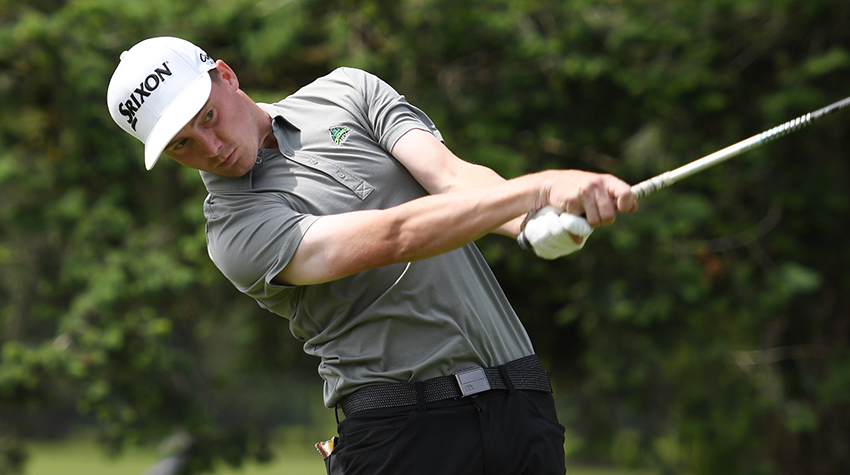 Zach Olson Sits Just One Back Of Leader Crisologo

Crisologo leads Zach Olson, a member of the University of the Fraser Valley Cascades golf team, by one shot. Olson, who hails from Strathmore, Alta., shot a one-under 71 Thursday and sits at eight-under. “I hit it into a couple of greenside bunkers which was unfortunate, but other than that it was pretty solid,” Olson said of his round.

Crisologo had no issues with Rivershore’s many bunkers during his round. He hit all 18 greens in regulation. “I feel fortunate to have taken advantage of some good ball-striking today,” he said.
Crisologo said his putter caught fire on the back nine after making the turn at one-under for his round. “I just made more putts coming in,” he said. “I think that’s how it has gone throughout the week. The putter starts out slow and then kind of picks up near the end.”

A number of players have moved within striking distance, including two-time Canadian Mid-Amateur champion Kevin Carrigan of Victoria. Carrigan fired a three-under 69 that moved him to seven-under and tied with Jake Scarrow of Dewdney. “The course is just playing progressively tougher,” Carrigan said.

“For the first time this week I missed a drive or two and unfortunately that was on the par 5s where you need to score. But other than that I was solid. I kept it in front of me. I hit it in the long grass once, but found it and made par. I played a good conservative round of golf today. I am two shots out. That’s nothing. I can’t wait. It’s a great opportunity.”

Scarrow, the 2015 B.C. Junior Boys champion who is heading into his final year at the University of Kansas, has feasted on the par 5s this week. “I am seven-under for the tournament and I am 12-under on the par 5s, so there is definitely more out out there for me if I get going on the rest of the holes,” said Scarrow, who shot a four-under 68 on Thursday. “I am looking forward to that tomorrow, hopefully.”

Abbotsford’s Dan Swanson, a former pro who recently regained his amateur status, moved into contention with a five-under 67. He is tied for fifth place at six-under with Carter Lewis of Calgary and Kaleb Gorbahn of Smithers. Swanson had an unusual round. He eagled the first three par 5s and missed a 10-footer for another on No. 18. Despite that, he said his game is a mess. “If I hit the ball like that tomorrow it will be 80,” he said.

“I hit the driver well. That was the best club in my bag and then I chipped in and made some putts. It was ridiculous. The way my swing is, I am not in the tournament. I'm going to the range to try and figure something out.”

Thirteen-time champion Doug Roxburgh, playing in his 52nd straight B.C. Amateur, birdied three of his first four holes, but had to settle for a three-over 75. He is tied for 36th place at six-over par through 54 holes. He remains the low Roxburgh. His son, James, is tied for 46th place at eight-over after shooting a 74 Thursday.

Click HERE for complete scoring from the B.C. Amateur

CHIP SHOTS: The top three B.C. players after Friday’s final round will represent the province at the Canadian Men’s Amateur Championship, which goes Aug. 6-9 at Duncan Meadows and Pheasant Glen Golf Clubs on Vancouver Island. . .Next year’s B.C. Amateur will be held at Big Sky Golf Club in Pemberton.