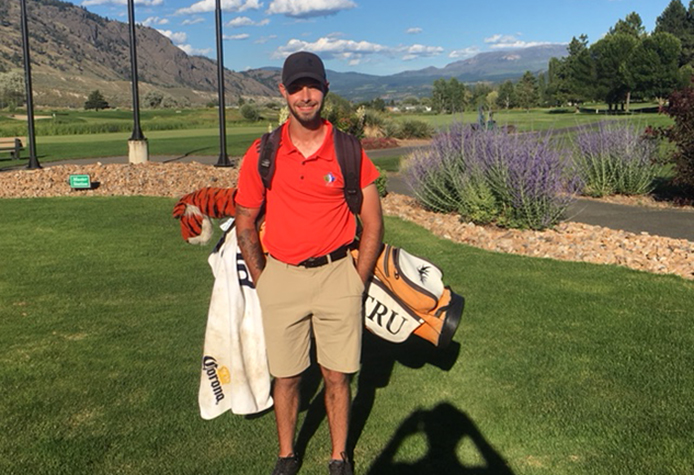 It Was 'Home Sweet Home' For Brent Pound As He Played Rivershore Golf Links In Round 2 Of The B.C. Amateur Like Somebody Who'd Been There Before...Several Times Before - Image Credit Brad Ziemer/BC Golf

KAMLOOPS -- Rivershore Golf Links was once home for Brent Pound, who literally grew up on the course he says he has probably played a couple thousand times. On Wednesday, Pound put all that local knowledge to good use as he grabbed a share of the second-round lead at the 116th playing of the B.C. Amateur Championship.

The 26-year-old, still a resident of Kamloops, but now a member at Kamloops Golf & Country Club, fired the low round of the day -- a five-under 67 -- that moved him to eight-under par and into a tie with Patrick Murphy of Calgary.

“I lived on the third hole from when I was 12 to 19,” Pound said. “I made double-bogey on that hole yesterday. You’d think I would have an advantage on it, but apparently not. I got my (par) four today and ran off to the fourth tee.”

Despite that hiccup on his former home hole, Pound knows Rivershore better than anyone in the field. “I have played a couple of thousand rounds out here,” he said. “So I know where not to put it.”

He made six birdies in his round Wednesday, a day when scores were considerably higher. He only bogey came on Rivershore’s tough par 3 17th hole. “I think I made a 50-footer on nine for birdie and then I chipped in for birdie on 12, so it was just my day today, I guess,” said Pound, who played two years of collegiate golf for Thompson Rivers University and now works for Telus.

“There are a couple of little things I can improve on. For some reason on both days on the back nine my swing has gotten a little squirrelly on me. I definitely have been scrambling a lot the last two days, but things have managed to turn out all right.”

The players said Rivershore played like a much different course on Wednesday. The greens have firmed up considerably and some of the pins were tucked in tough spots.

Doug Roxburgh, the 13-time B.C. Amateur champion who is playing in the tournament for the 52nd straight year, made the cut for the 50th time. He sits tied for 32nd at three-over par. The cut came at eight-over par. “The course is tough,” Roxburgh said. “The greens are like concrete. Downwind, you can’t hold them. You just have to chip and avoid the bunkers.”

Murphy, who fired a course record 10-under 62 in Tuesday’s opening round, didn’t think he played all that badly on Wednesday when he fired a two-over 74. “Yesterday I had 13 birdie putts that were uphill,” Murphy said. “Today I had two. It was really hard to get it close today. I hit a few less fairways, but overall I felt like I played pretty well. I guess 74 seems a lot because it was 12 shots higher than yesterday, but there weren’t that many low scores out there today.”

Murphy’s right. There were 10 rounds in the 60s on Tuesday. On Wednesday, there were only three. Zach Olson, a 22-year-old Strathmore, Alta., native who plays his collegiate golf for University of the Fraser Valley in Abbotsford, fired a four-under 68 to move to seven- under and is alone in third place, just one shot behind the leaders.

“It was definitely tougher today,” Olson said. “I just tried to hit it to a comfortable distance unless I had a good number into the green and just stayed patient with the putter. I didn’t make much on the front nine and kind of got a few to drop coming in.”

Carrigan, the two-time Canadian Mid-Amateur champion, loves the firm and fast conditions Rivershore is now presenting to the field. “I wasn’t capitalizing on my opportunities today,” Carrigan said. “The ball was releasing into the rough and the rough is a little bit longer. It was just a little bit of a different course today. But it was a treat to play. We get about two weeks a year where we get to play in conditions like this and you dream about it.”

Seventy-two players survived the 36-hole cut. The 66-year-old Roxburgh was delighted to be one of them. In recent years Roxburgh has said making the cut is his main goal now at B.C. Amateurs. So now that’s he has made another one, what is his goal now? “Maybe try to get back to even-par,” he said with a smile. “That would be fun. I just want to keep working on things and get tuned up and ready for next week at Big Sky.”

Click HERE for complete scoring from the B.C. Men's Amateur.

CHIP SHOTS: The top three B.C. players after Friday’s final round will represent the province at the Canadian Men’s Amateur Championship, which goes Aug. 6-9 at Duncan Meadows and Pheasant Glen Golf Clubs on Vancouver Island. . .Daniel Swanson and Zach Olson of Abbotsford, Khan Lee from  Langley and Burnaby's Ryan Stolys representing Zone 3 (Fraser Valley) won the 36-hole zone competition with a score of 10-under par. That was two better than Zone 2's (Okanagan) Pound, Ryan Krisko, Adam Niles and Jeremy Osborne - all from Kamloops & Rivershore GC - along with Salmon Arm's Jeremy Osborne.