Patrick Murphy Shoots 10-under For No. 10 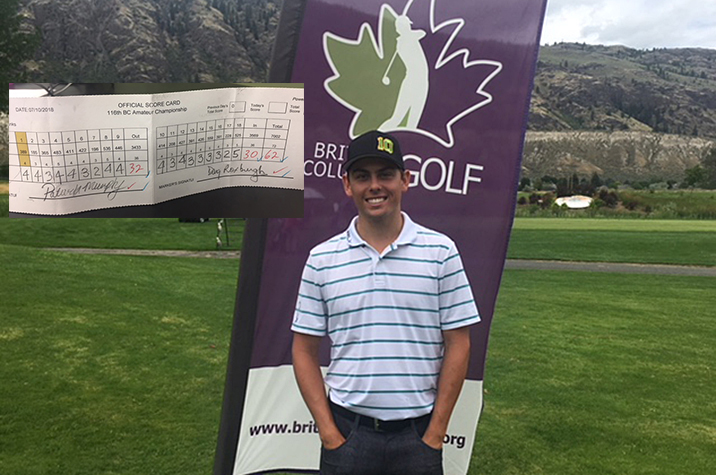 KAMLOOPS -- His score matched the number on the front of his golf cap and Patrick Murphy says that is what made his record-setting round Tuesday at Rivershore Golf Links extra special.
Like so many Canadians, Murphy was deeply touched by the tragedy that befell the Humboldt Broncos junior hockey team earlier this year.

Ryan Straschnitzki wore jersey No. 10 for the Broncos and the Airdrie, Alta., native was severely injured in the crash. Murphy, who hails from Calgary, and a bunch of his friends are wearing the “Straz strong” hats with No. 10 on the front in honour of Straschnitzki.

On Tuesday, Murphy shot a 10-under par 62 in the first round of the 116th playing of the B.C. Amateur Championship. Murphy pointed to the No. 10 on his hat after the round that gave him a five-shot lead. It was almost like it was just meant to be.

“I grew up playing hockey in an adjacent town and would cross paths with Ryan,” Murphy said. I don’t know him well, but I know a bunch of guys who know him.”

Murphy, who plays his collegiate golf at UCLA, had to pause briefly to regain his composure as he talked about Straschnitzki, who was left paralysed from the bottom of his pectoral muscles down as a result of the accident.

“It is a bit emotional,” Murphy said. “I was in California when I heard about the accident. It is pretty cool for me to be able to shoot the 10-under while wearing his hat. I know a ton of my friends are also wearing this hat in recognition of Ryan. To go 10-under and set a course record makes it so very meaningful.”

The 21-year-old Murphy figured it might be a special day when he learned that he would be playing alongside 13-time B.C. Amateur champion Doug Roxburgh in Tuesday’s opening round at Rivershore. Roxburgh is playing in his 52nd straight B.C. Amateur.

“I know he has won this tournament 13 times and for him to be my marker today is like the coolest thing,” Murphy said. “I was teeing off behind him on the first hole and he gets the ‘now on the first tee, 13-time winner of the B.C. Amateur, Doug Roxburgh,’ and I am just laughing.

"The guy is a legend in Canadian golf and for me to meet him was cool, for me to play with him was cooler and to be able to play that well in his group was unbelievable. He was so nice. He and his caddie (Roxburgh’s wife Lorna) were cheering for me the whole day. And I had my dad (John) on the bag, so it was awesome.” 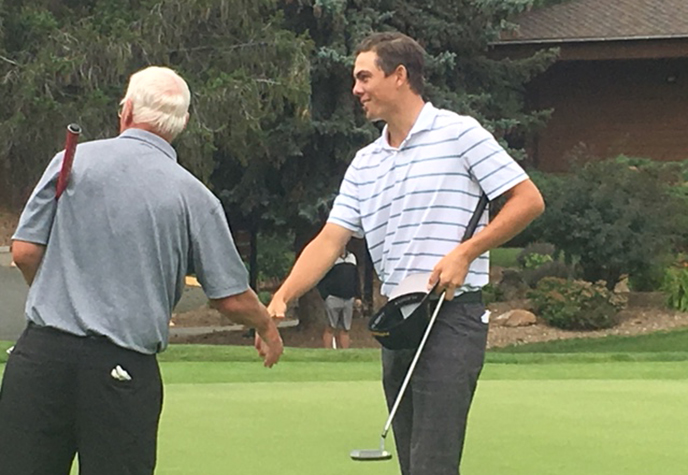 Murphy had 11 birdies and one bogey on his card and bettered the previous course record by one shot. He bogeyed his second hole to go one-over for his round, but then basically didn’t miss a shot.

The 66-year-old Roxburgh thoroughly enjoyed having a bird’s-eye view of Murphy’s round. “He did everything well,” said Roxburgh, who opened with a one-over 73. “You shoot 62 and you are going to do everything well. He hit a lot of beautiful iron approaches. He almost holed four approach shots. It was fun, we were chatting about things during the round. He was relaxed, he just hit great shots all day long.”

Most of Murphy’s birdies came from close range, thanks to some sublime iron play. “I made 11 birdies and I think seven of them were like inside five feet,” he said. “I did make two 30-footers on 3 and 17. When those are going in, it’s your day.”

Murphy leads Kevin Carrigan of Victoria and Alan Tulusso of Burnaby by five shots. Carrigan, a two-time Canadian Mid-Amateur champion, thought he had gone low with his five-under 67 before he heard about Murphy’s round. “It was good,” Carrigan said of his round. “I bogeyed the first hole, but other than that I settled in made a bunch of birdies.”

Carrigan said he got wind of Murphy’s round when he received some hand signals from Roxburgh. “I was on 17 and we couldn’t figure out if Doug was pulling my chain by holding two hands like this (pointing down). I guess that number (a 62) was out there, but man, you’d have to really be on your game to get that. I played really well and I am five shots back.”

Click HERE for complete scoring from the 116th B.C. Amateur.

CHIP SHOTS: The 156-man field will be cut to the low 70 and ties after Wednesday’s second round. . .The top three B.C. players after Friday’s final round will represent the province at the Canadian Men’s Amateur Championship, which goes Aug. 6-9 at Duncan Meadows and Pheasant Glen Golf Clubs on Vancouver Island.