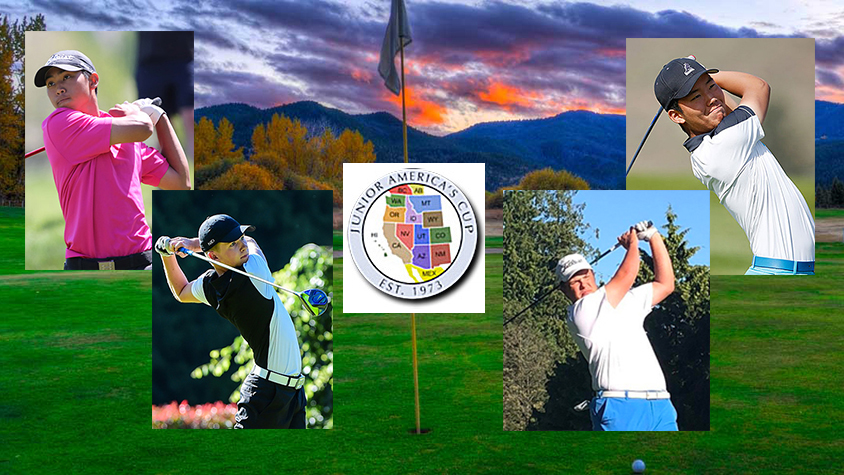 Each round will count the top-3 scores from its team members. This year’s field once again features several top-ranked junior golfers from around the world. Live scoring can be followed daily.

Fairmont’s golf course features an outstanding 6,741 yard, 18 hole, par 72 layout. Fairmont’s “mile high, mile long” 5th hole is recognized as one of the most challenging among Montana golf courses. The green is a mile high and the tee box is 649 yards away, making this par 5 one of the longest holes in Montana. Fairmont’s 3rd hole features Montana’s largest green, a three-tiered 10,000 square foot putting surface.

Five ponds add to the diversity of the 150 acre course, with a dramatic fountain pond on the finishing hole. CLICK HERE for more info on the course.

HISTORY
In 1959 there was an amateur biannual event between amateur teams from the three countries, which was disbanded in the mid 60’s, that did not involve juniors and the JAC had not been organized. The original JAC started as matches between the Mexican, Alberta and the Southern California Junior Golf Associations with each association hosting every 3 years.

At the meeting the decision was made to expand the Junior America’s Cup to include our western states plus Canada and Mexico. Those participating were: British Columbia, Idaho, Mexico (with two teams), Nevada, Northern California, Oregon, San Diego, Southern California, Washington and Utah.

In 1972, the Junior Golf Association of Northern California hosted the first event under the new expanded format. Each team had five members. The competitors were housed by golfing families in the Pebble Beach area. What a great experience it was for all involved! The boys played Monterey Peninsula Country Club the first round, Spyglass Hill the second round, with the final round being hosted by the world famous Pebble Beach Golf Links.

The Awards Ceremony was held on the lawn by the picturesque 18th green. San Diego captured the gold and one of the team members, Scott Simpson, is still active on the pro tour today.

In 1974, a change was made to the team size, with four team members instead of five. The format has remained the same since. That year, Arizona and Hawaii were invited to participate. British Columbia withdrew from the Matches for a few years.

In 1975, Colorado became a part of the America’s Cup Matches with Montana joining in 1976 and Alberta in 1977. British Columbia also rejoined. The field remained the same until 1989 when Sun Country (New Mexico and part of western Texas) were asked to join. In 1995, Mexico asked to bring one team instead of two. Wyoming was admitted to the group in 2001 which brought the team total to 17 with each golf association rotating hosting this prestigious event.

The pairing format is quite unique in that each team member plays with a different player from two other associations the first two rounds. The final day pairings are made according to the 36-hole team totals. There are no playoffs in case of ties; duplicate medals (gold, silver and bronze) are presented to the tying team members.