Proteaus Keep It All In The Family At Golf Tournaments 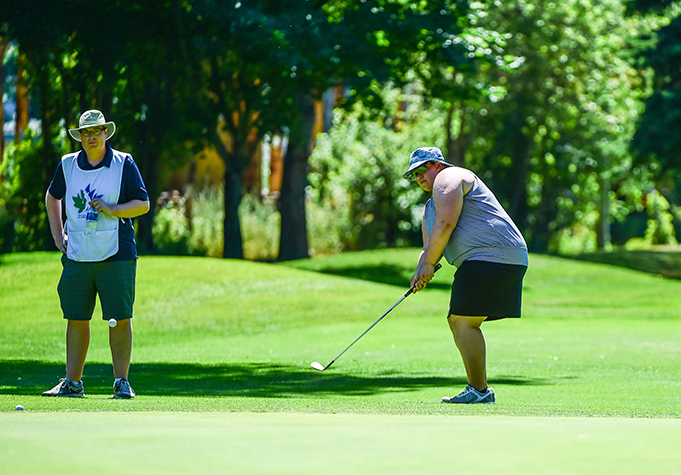 SICAMOUS -- They are not just golf tournaments, they are more like family adventures when Christina and Jim Proteau hit the road these days.

They are packing much more precious cargo than Christina’s clubs, which happen to have won a collection of provincial titles. The Proteaus are also bringing along their two young sons -- Jameson, who is three and a half, and eight-month-old Thatcher -- and that makes things interesting.

Proteau, who grabbed the first round lead in the B.C. Women’s Mid-Amateur Championship on Tuesday, insists she and her husband wouldn’t change a thing.

“The day before you leave, as you are packing up your whole house, you go through that feeling of 'what are we doing,'” a smiling Proteau said after her round. “We've gone through that feeling every trip we've taken since Jameson was a baby. And then that subsides and you're all packed up and you get in the car and about three-quarters of the way through a travel day Jim and I look at each other again and go, why are we doing this?

“But once we get there we have a great time and we have never come home -- no matter the golf result -- and said we shouldn’t have done that. We have had some great results, we have had some poor results, and it has always been worth bringing our kids. And it is only going to get easier -- unless we have a third.”

Proteau, a Crown prosecutor in Port Alberni, opened with a seven-over par 79 at Hyde Mountain Golf Course. As usual, husband Jim was by her side as caddie. Jameson and Thatcher were in the capable hands of a good friend who travels with them to tournaments. Proteau felt she played better than her score would indicate. “I hit a lot of good shots,” she said. “It just didn’t add up to a great number for me.”

Proteau, who has a one-shot lead on Jackie Little of Procter, Karen Kloske of Lake Cowichan and Nancy Chow of Richmond, loves Hyde Mountain. “I think it is a great golf course. It’s a (Les) Furber (design), so it reminds me a lot of courses back home on Vancouver Island like Fairwinds and Storey Creek. And also Fairview Mountain (in Oliver). It’s a lot like that, elevated, and I thought it was going to suit me very well.”

Proteau is seeking her sixth B.C. Mid-Amateur crown. She had birdie looks inside 12 feet on the first three holes, but couldn’t convert the putts. She double-bogeyed the fourth and 14th holes.  “I almost hit it into Mara Lake on 14,” she said.

Despite those stumbles, Proteau feels confident about the next two days. “If I didn’t feel I have the potential to play well I would be feeling a lot worse with 79,” she said. “But I know I can improve a whole heck of a lot the next couple of days.”

Little, who last week won her sixth B.C. Senior Women’s title at Crown Isle Golf Resort in Courtenay, made her only birdie of the day on the 17th hole. “It's a very demanding golf course,” Little said. “It is target golf and it is intimidating. The tee shots are especially intimidating and the greens are really undulating. I don’t think there is a time on the golf course where you can relax.”

Parksville’s Josee Deslauriers, who won both titles last year at Kokanee Springs Golf Resort in Crawford Bay, opened with an 11-over 83 and is seventh in the Mid-Amateur competition and sixth in the Mid-Master category.