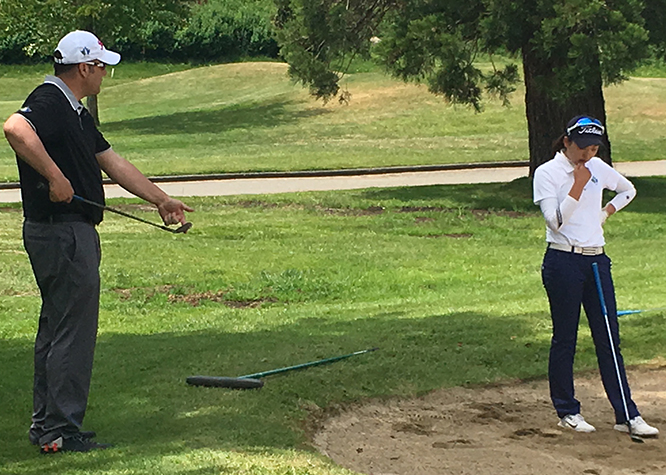 Debbie Pyne is determined to do everything she can to give British Columbia’s top players an edge when they play in this summer’s Canadian Junior Girls Championship. That event is not being held until July 31-Aug. 3 at Beach Grove Golf Club in Tsawwassen, but Pyne and her team of coaches from British Columbia Golf have been preparing for the championship for months.

Pyne, the managing director of player development with British Columbia Golf, has arranged for a select group of B.C’s top juniors to attend a series of camps designed to help them become intimately familiar with Beach Grove.

The most recent camp was a two-day gathering June 2-3 at Beach Grove, where coaches Jennifer Greggain, Matt Cella and Taylor Kim ran the girls through a series of short-game exercises before they played two rounds of golf designed to simulate tournament conditions.

“As a coach I want to feel I have the most prepared team that is going to arrive at the golf course,” says Greggain, a former LPGA Tour member who is British Columbia Golf’s head women’s and girls coach. “So that means just doing everything we can to give them the knowledge and the skills that they need for that event.”

Cella, who is British Columbia Golf’s juvenile girls coach, said it makes perfect sense to try and take advantage of the championship being played close to home. “With it being in our back yard so to speak, we have got the advantage that we can bring these girls out here four or five or six times and really help them get to know the golf course well,” Cella said.

“Beach Grove has been very accommodating letting us come out to do this being a private club. Sometimes that can be difficult, but they have really welcomed us and let us come out and practise and play.”

Greggain and Cella both made the point that being better prepared than some of your competitors can make a big difference. “Even if it is one shot or something you never know what that is going to do for you,” Cella said. “The more prepared, the more familiar they are with the golf course -- with the greens, the tee shots -- it might be a fraction of a stroke, but if you times that over four days it adds up pretty quick. That is what we are hoping to do, add some strategy, where to hit it, where not to hit it, that kind of stuff.”

The girls were asked to compile yardage books on Beach Grove, forcing them to become intimately familiar with the intricacies of the layout. “This is our fourth session,” says Greggain. “It's a two-day camp, the other three have been Friday afternoon sessions. The first was an indoor session where we talked about nutrition and just the idea of yardage books and how to use Google maps to sketch out a golf course you don’t know before you get there. So we have done all that, this will be the first time using this yardage book and now we will be fine-tuning it and honing it in and just starting to use it a little bit more.” 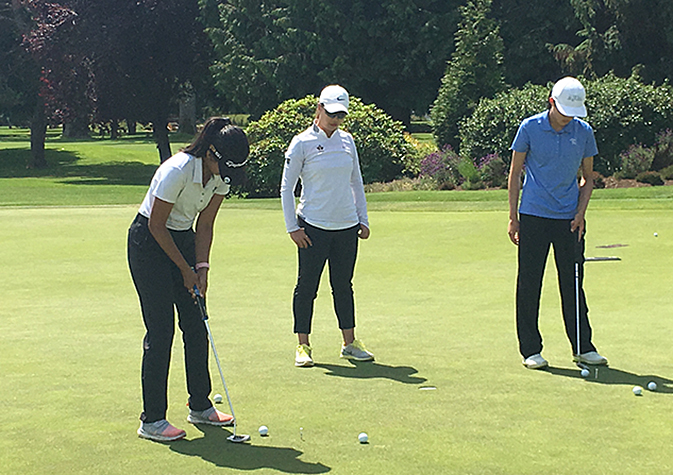 Angela Arora, last year’s B.C. Bantam Girls champion, was one of the nine participants at the Beach Grove camp. The 13-year-old from Surrey thinks she and her fellow camp participants will have an edge thanks to all the pre-tournament work they are doing. “I think it is a great help because they work on the aspects that are important for Beach Grove,” she said.

“We constructed a yardage book for the entire course, we had to include the best up-and-down opportunities from all the holes possible pin locations, slope, etcetera. Having a strategy really helps you in tournament play. If you just go on the fly that is not helpful. If you have a set strategy and know everything about the course it’s a big help.”

Surrey’s Taylor Kim, a former B.C. Women’s Amateur champion and a past member of Team Canada’s national team, was a guest coach at the Beach Grove camp. Kim, who graduated two years ago from the Kent State University, is working as a teaching pro at Beach Grove, is delighted to have the opportunity to help prepare the B.C. girls for the national championship.

“I just want to help them in any way I can,” she said. “I have a lot of experience in this area. I was a Team Canada member for five years and I went through the Team B.C. training when I was their age so I just want to share all I’ve got. I know what it’s like to compete at a national event and I am super-excited to be doing this.”

The B.C. girls aren’t done with Beach Grove just yet. They’ll be back for another session on June 22.