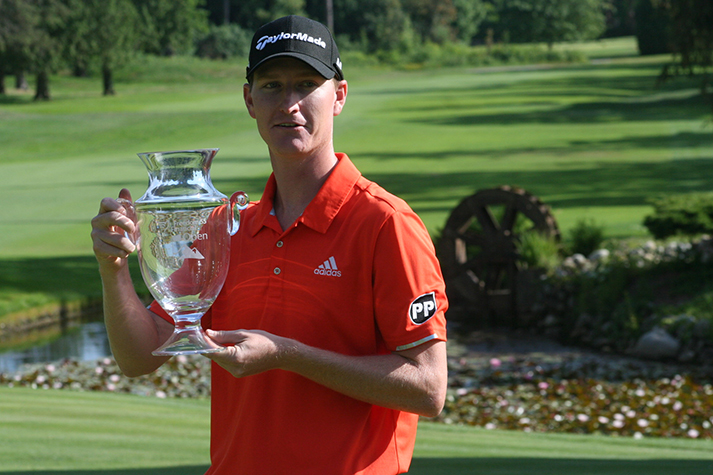 Jordan Niebrugge hopes his win Sunday at the Freedom 55 Financial Open will be his Mackenzie Tour-PGA Tour Canada swansong. The 24-year-old Oklahoma State University graduate has conditional status on the Web.com Tour, where he will play this week in Illinois, and hopes he won’t be making a return trip north.

“If I can get on a roll and keep playing well my focus will probably be down there a little more,” he said.

Not that he hasn’t enjoyed his time here. Niebrugge tied for second last year at Point Grey Golf & Country Club and this year went one better than that. Starting the day with a five-shot lead, Niebrugge carded an even-par 72 and beat fellow Americans Cody Blick and Zach Wright by two shots to claim the $36,000 first-place cheque.

That’s the thing about the Mackenzie Tour. The really good players are never here for long. And Niebrugge is a good player. Back in 2015 he finished sixth at the Open Championship as an amateur. Sunday’s win was the Wisconsin native’s first as a professional and came just a few days after his former collegiate team won the NCAA Championships.

He said playing with a big lead was strange. “I knew I was playing great golf,” said Niebrugge, who finished at 16-under par. “I knew if I took care of what I needed to I would be standing here at the end. For the most part I was able to do that and I guess that is why you build a big enough lead so you don’t have to make all the putts coming in.”

Comox’s Riley Wheeldon was the low Canadian, tying for 10th spot at nine-under. Fellow British Columbian Jared Du Toit of Kimberley tied for 41st place at three-under. “It was fine,” du Toit said of his week. “I just didn’t get a lot out of it any day really. I have been worried about my ball-striking the last two or three months and this event it was much better. So that’s good, I just have to focus on staying clean and I can see myself in contention here pretty quick.”

JONES WITHDRAWS: Eyebrows were raised when Jimmy Jones failed to show up Sunday for his final round tee time at the Freedom 55 Financial Open at Point Grey Golf & Country Club. Jones, the son of the late Dawn Coe-Jones, was given a sponsor’s exemption to play in the event and was making his pro debut. He made the cut on the number Friday and shot a six-over 78 in Saturday’s third round.

His father, who was caddying for Jones, was at the course waiting for his son when word came that Jones was withdrawing due to an illness.

NICE FINISH: Merritt’s Roger Sloan had great bookend rounds at the Web.com Tour’s Rex Hospital Open in Raleigh, N.C. Sloan, who opened the tournament with a seven-under 64, closed with a 63 on Sunday to finish tied for 10th place at 14-under par. Sloan shot 70 and 73 between those two low rounds. He moved up to 39th on the Web.com Tour money list.

Doug Roxburgh, the 13-time B.C. Amateur champion who is a longtime Marine Drive member, closed with a two-under 69 to finish alone in eighth place at three-over par.

Dillon shot a pair of 67s at Nicklaus North Golf Course. Secord, who opened with a one-over 72, made a second-round charge with an eight-under 63. The win was worth $3,000 to Dillon and served as retribution of sorts after he was edged last year in Whistler by Langley’s James Allenby.

CONVINCING WIN: The Northview Golf Academy team of Matt Palsenbarg and Jake Scarrow won the PGA of B.C.’s Tournament of Champions in convincing fashion at Tobiano Golf Course in Kamloops. Palsenbarg and Scarrow, the 2015 B.C. Junior Boys champion who just finished his junior year at the University of Kansas, combined for a 10-under 62. That beat the rest of the field by six shots.

OPEN SEASON: Phil Jonas shot a three-under 69 to win the West Coast Golf Group’s annual pro-am at Hazelmere Golf Club. Hazelmere happens to be the home of Jonas’s golf academy. Jonas, who edged Clark MacPherson by one shot, will attempt to qualify next week for the U.S. Senior Open.

Jonas played at last year’s U.S. Senior Open at Salem Country Club in Peabody., Mass., after winning a qualifier at Bellingham Golf Cub. Next Monday’s qualifier is at the Cedars at Dungeness in Sequim, Wash. Jonas will have to win there as well as only one spot is up for grabs.

JACK’S BEST: The fact that a Jack Nicklaus design -- Shoal Creek -- just played host to the U.S. Women’s Open had Golf Digest selecting the Golden Bear’s 10 best courses. None of his Canadian designs made it, but Nicklaus North in Whistler did get an honourable mention.

CHIP SHOTS: Congratulations to Victoria’s Alison Murdoch, who will be inducted later this year into the Greater Victoria Sports Hall of Fame. Murdoch’s long list of golfing accomplishments include four Canadian Senior Women’s Championships, four Irish Senior Women’s Open titles and one British Senior Women’s championship. . .Delta’s Mary Parsons had a successful freshman year at the University of Indiana. Parsons set a single-season scoring average record of 73.31 in her first year as a Hoosier