“I was always curious about that in the beginning,” Rowe said Thursday before he played the third round of the Canadian University/College Championship at Chilliwack Golf Club.

“I thought that maybe I would regret not having gone down to the States, but I am definitely thrilled to be out at UVic and thankful for the opportunities I have had. It is so great to be close to home and be able to play in tournaments like these. It was definitely the right choice.”

This tournament was created, in part, with players like Rowe in mind. Golf Canada wanted to give more Canadian youngsters the option to play their collegiate golf at home.

Doug Roxburgh, the 13-time B.C. Amateur champion and a former director of player development with Golf Canada, was a big supporter of the event when it was created by former Golf Canada executive director Stephen Ross.

Sixteen years later, Roxburgh remains a backer of the tournament and in fact worked this week’s event, volunteering as an official scorer. “The quality of golf has really improved since the first ones,” Roxburgh said in an interview. “The depth of the field has improved. More and more Canadian kids are staying home to play. I think this tournament is tremendous.”

Roxburgh also points to another reason why he feels the tournament is important. “I have always thought that from a Golf Canada point of view and a provincial golf association point of view, this is probably our most important tournament,” he said. “You get all these kids who are going to graduate and go into business. Very few of them are going to turn pro. So they are going to join clubs, they are going to have the opportunity to give back to the game and volunteer.”

For Rowe, to be able to compete in a national championship in his final event as a collegiate player is a perfect ending. “In terms of college tournaments this one is definitely right up there for me,’ Rowe said. “Golf Canada always runs good events, they are always on nice courses and the fields are good. It is a fun tournament to play.”

Rowe, an art history major who has put together a solid playing record for the Vikings, would obviously like to finish off his university career in style. “It has been a bit of a rough season,” he said. “I haven’t really had my best stuff for most of the year, so there is definitely a little extra motivation to try and finish it off on the right note.”

Twenty men’s teams and 12 women’s teams from across the country are competing this week in Chilliwack. It’s a big event for all of the athletes. For some, this is their major. “Any time it’s a national championship, it’s big,” said University of Waterloo junior Tyson Turchanski. “It’s pretty cool to be a part of when you are competing on the national stage. For some of the players here, this is the pinnacle, this is as good as it gets. It’s really exciting.” 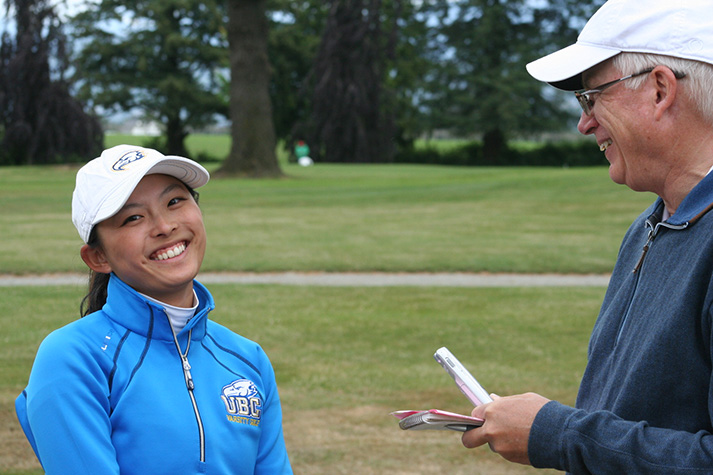 UBC's Avril Li, Who Hails From Port Moody, Is Your 3rd Round Women's Leader At The Canadian University/College Championship at Chilliwack Golf Club

Avril Li is certainly finding it exciting. The University of B.C. junior who grew up in Port Moody shot a three-under 69 Thursday to help give her team a 20-shot lead heading into Friday’s final round. The Thunderbird women are attempting to win this event for the 13th time in its 16-year history.

Li sits at four-under par through three rounds and has a five-shot lead in the individual competition. This is Li’s third appearance at this tournament and the fact she has a real chance to win it has her smiling. “It would be huge because watching (former UBC teammate) Kat Kennedy win it twice in a row really is motivating,” Li said.

“This tournament is big for me. I have played in the Canadian Amateur, the Canadian Junior and this is the Canadian University Championship, so it would mean a lot to win it.”

The UBC women’s team, which also includes Cecile Kwon, Kelly Hellman and Shania Remandaban combined for a team score of three-over 219 Thursday and sit at 16-over through three rounds. They have a 20-shot cushion on second-place Victoria.  “Our goal is to get better every day and we did that today,” Li said.

LI’s closest pursuer in the women’s individual race is Sarah Dunning of the University of Guelph. Dunning had the day’s best round, a five-under 67 on Thursday.

CHIP SHOTS: The individual winners on the men’s and women’s side earn exemptions into the Canadian Amateur and Canadian Women’s Amateur this summer. . .Rowe will represent British Columbia in this summer's Pacific Coast Amateur Championship at the Olympic Club in San Francisco.