Abbotsford's Adam Hadwin Surpassed The $3Million Mark For The Year With His 5th Place Finish In The Bridgestone Invitational - Image Courtesy @adamhadwin.com

Adam Hadwin made his World Golf Championship debut a highly impressive one as he finished tied for fifth in a field that included 49 of the top 50 players in the world. Hadwin closed with a one-under 69 at Firestone Country Club to finish the WGC-Bridgestone Invitational at seven-under par.

Japan’s Hideki Matsuyama ran away from the field, shooting a nine-under 61 Sunday to finish at 16-under par and five shots ahead of American Zach Johnson. Hadwin, who had missed three straight cuts, did more than bump a slump at the Bridgestone. He also boosted his chances of making the International team at this fall’s Presidents Cup.

Hadwin started the week 12th on the International points list and Sunday’s result moved him up to 10th spot, passing Japan’s Hideto Tanihara and Emiliano Grillo of Argentina. The top 10 players make the team and International captain Nick Price has two captain’s picks.

Hadwin, who earned $268,500 on Sunday to pass the $3-million mark this year, will play in his fourth major of the year at this week’s PGA Championship at Quail Hollow Golf Club in Charlotte, N.C.

INVISIBLE MAN: Despite his solid play, Hadwin was ignored by CBS during Sunday’s telecast. He finished tied for fifth with Rory McIlroy, Russell Knox and Paul Casey who all got plenty of love from CBS. Hadwin was the invisible man. The only time we saw him was when he happened to be in the background of one of the shots of his playing partner, Charley Hoffman.

BONUS BUCKS: Kimberley’s Jared du Toit earned a $2,500 bonus from Freedom 55 Financial for being the low Canadian at the Syncrude Oil Country Championship, the Mackenzie Tour-PGA Tour Canada stop in Edmonton. Du Toit finished tied for ninth at 11-under par.

That was five shots behind winner Patrick Newcomb of Murray, Ky., who beat German Max Rottluff on the fourth hole of a sudden-death playoff. Du Toit now stands 22nd on the Mackenzie Tour money list with $12,352. The Mackenzie Tour is in Calgary this week for the ATB Financial Classic.

SENIOR MOMENT: Doug Roxburgh is hoping to continue what has been a good golfing summer when he tees it up this week across the pond in England. For the second straight year, Roxburgh is playing in the British Senior Amateur Championship. The 54-hole event begins Wednesday at storied Sunningdale Golf Club (Old Course), just west of London. 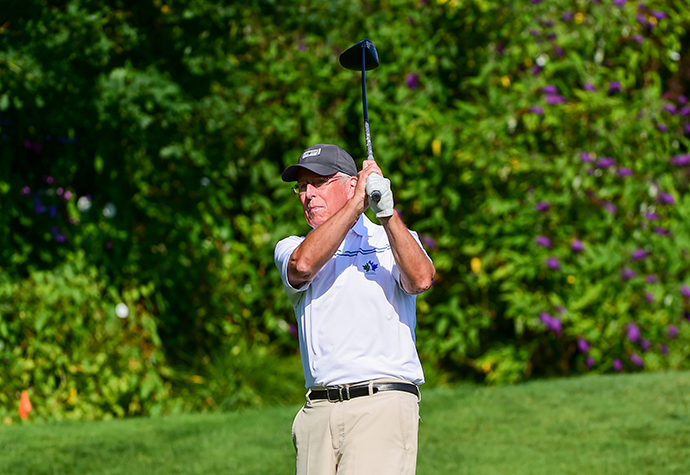 TOP 10 FINISH: Vancouver’s Tiffany Kong closed with a three-under 69 and finished seventh at the Girls Junior America’s Cup in Las Vegas. Kong completed the 54-hole event at three-under par. The British Columbia team of Kong, Kathrine Chan of Surrey, Tiegan Taylor of Kelowna and Cecile Kwon of Maple Ridge finished ninth with a score of 22-over par.

Seventeen teams competed in the tournament, held at Reflection Bay Golf Club. Southern California won the event by a whopping 28 shots with a team score of 35-under par.

TEAM B.C.: Kong will be part of B.C.’s girls’ team at this week’s Canada Summer Games golf competition in Winnipeg. She will be joined by teammates Alisha Lau, the  reigning B.C. Junior Girls champion, and Hannah Lee of Surrey.

On the boys’ side, Nolan Thoroughgood of Victoria, Tristan Mandur of Mill Bay and Keaton Gudz of Victoria will represent B.C. British Columbia has won gold in all of the team and individual competitions since golf was introduced in 2009 at the Canada Summer Games.

AMATEUR HOUR: There has been a change to British Columbia’s Willingdon Cup team that will compete at this week’s Canadian Men’s Amateur Championship at Toronto Golf Club. Victoria’s Kevin Carrigan, who earned a spot on the team by finishing third at last month’s B.C. Amateur Championship, is unable to play this week due to work commitments.

His place on the team will be taken by Lawren Rowe of Victoria. Rowe will join B.C. Amateur winner Jake DuVall of Victoria and Chris Crisologo of Richmond on the B.C. team.

B.C. TRIO: Three British Columbians will tee it up at this week’s U.S. Women’s Amateur at San Diego Country Club. Kathrine Chan of Richmond, Naomi Ko of Victoria and Mary Parsons of Delta are in the 156-player field that begins two rounds of stroke play on Monday.

The top 64 players advance to the match play portion of the tournament which begins on Wednesday. The average age of the field is 18.86 years and players from 21 countries are represented.

LUCKY NO. 7: Donald Miyazaki is executive director of the PGA of BC, the organization that represents the province’s club professionals. Miyazaki can also play a bit. In fact, he plays so well that he just won his seventh club championship at his home course, Quilchena Golf & Country Club in Richmond. “The previous record was four set by two people and when I won my fifth, I thought they would tell me to stop playing, but I guess I’ll keep going until they pull my membership,” joked Miyazaki.

WELL DONE: Speaking of the PGA of BC, its professionals once again raised big money in their annual Golfathon for ALS. The organization announced this weekend that this year’s campaign has raised $145,271. In the 12 years since the PGA of BC began the campaign, it has raised more than $1.44 million and its members have played 210,986 holes to raise that money.

ALS, or amyotrophic lateral sclerosis, is a neurodegenerative disease where the nerve cells that control your muscles die. It is often referred as Lou Gehrig’s Disease. The former New York Yankee great died of the disease in 1941.